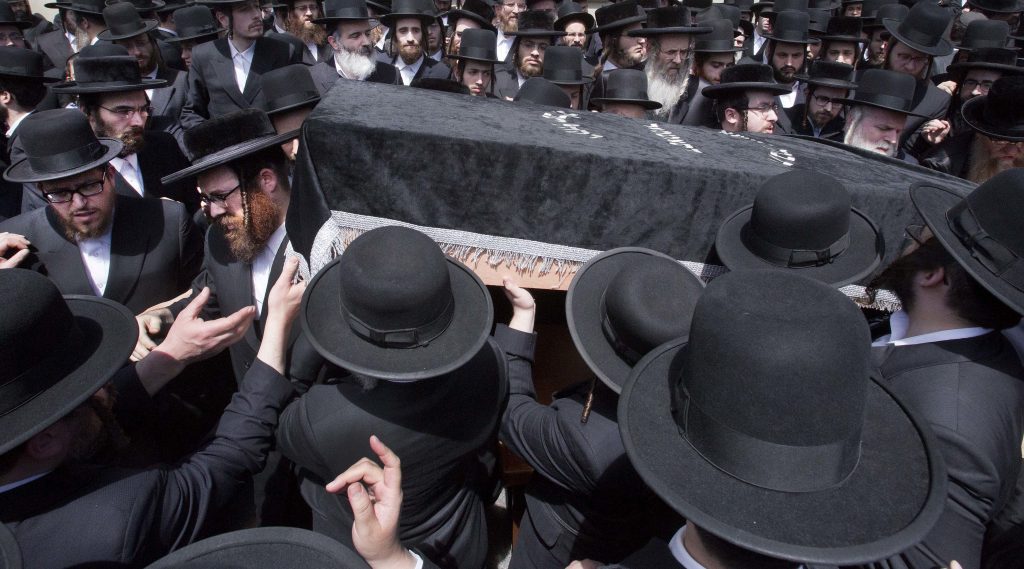 Still reeling from the tragic drowning deaths of two of its prominent community members, the Satmar kehillah and many from the broader Jewish community gathered to bid a tearful farewell to Reb Chaim Parnes, z”l, and Reb Yitzchok Rosenberg, z”l.

The levayah of Reb Chaim Parnes, known as the Stropkover Rav, was held on Wednesday morning at the central beis medrash of Kiryas Joel and was attended by a large crowd of mourners. Given that the ordeal of arranging for the niftar’s release and transportation had caused significant delays, hespeidim were kept to a minimum to allow for the kevurah to take place as quickly as possible.

The Satmar Rebbe, Harav Aharon Teitelbaum, shlita, and the niftar’s children all spoke briefly about the terrible tragedy of the event as well as the niftar’s humility, middos tovos and vast Torah knowledge.

At roughly the same time, thousands gathered at the Satmar beis medrash in Williamsburg on Hooper Street for the levayah of Reb Yitzchok Rosenberg, who served as Rosh Hakahal and was one of the major financial supporters of the Satmar community under the leadership of the Rebbe, Harav Aharon Teitelbaum.

The Munkatcher Rebbe, shlita, with whom the niftar maintained a very close relationship spoke warmly of his memories of Reb Yitzchok during his years as a talmid in the Munchatcher yeshivah and of his unending generosity.

“He never said no. He supported tremendous amounts of Torah and chessed,” said the Rebbe. “I asked him many times to help with cases of pidyon shevuyim. He always gave on the condition that no one should know about it, but now that he is in the olam haemes, we must talk about all of his maasim tovim.”

Following the hespeidim, the aron passed by the Satmar Cheder and all of the children came outside to give a kvod acharon to Reb Yitzchok, who was central in founding and supporting the Talmud Torah.

The levayah then proceeded to Kiryas Joel where crowds packed the town’s main beis medrash to heard additional hespedim from the Satmar Rebbe Harav Aharon Teitelbaum; Harav Getzel Berkowitz, Dayan of Kiryas Joel; as well as several of the kehillah leaders and family members.

“No shame or concern for his own honor ever stopped him,” said the Rebbe. “For kvod Shamayim, he was ready to give away his whole life.”

Maspidim spoke of the niftar’s tremendous chassadim and his dedication to building Yiddishkeit and Torah.