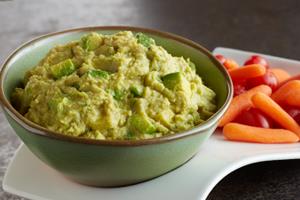 Israeli cuisine is a mix of old and new derived largely from Jewish communities around the world, but it appears that the quintessential Israeli food is – hummus. A poll taken on behalf of Diner’s Club indicates that 93 percent of Israelis eat hummus on at least a weekly basis; on average, they have at least two servings a week.

The poll was taken in advance of International Hummus Day, a new “event” that was created several years ago to celebrate the industry.

Sixty eight percent of Israelis, based on the scientifically-determined random sample, have hummus in their refrigerators on a regular basis; those who don’t, eat it at restaurants, falafel shops, or the like. Sixty percent buy commercially-made hummus in supermarkets or groceries, 15 percent buy it and take it home from hummus restaurants, and 13 percent make it at home, from chickpeas and tehina. 22 percent  of people over age 55 make hummus at home.

In 54 percent of households with children under age 18, hummus eating began before age 6. 59 percent prefer hummus with tehina added, 47 percent liked it with chickpeas, and 38 percent enjoy it most with pine nuts, the poll showed.