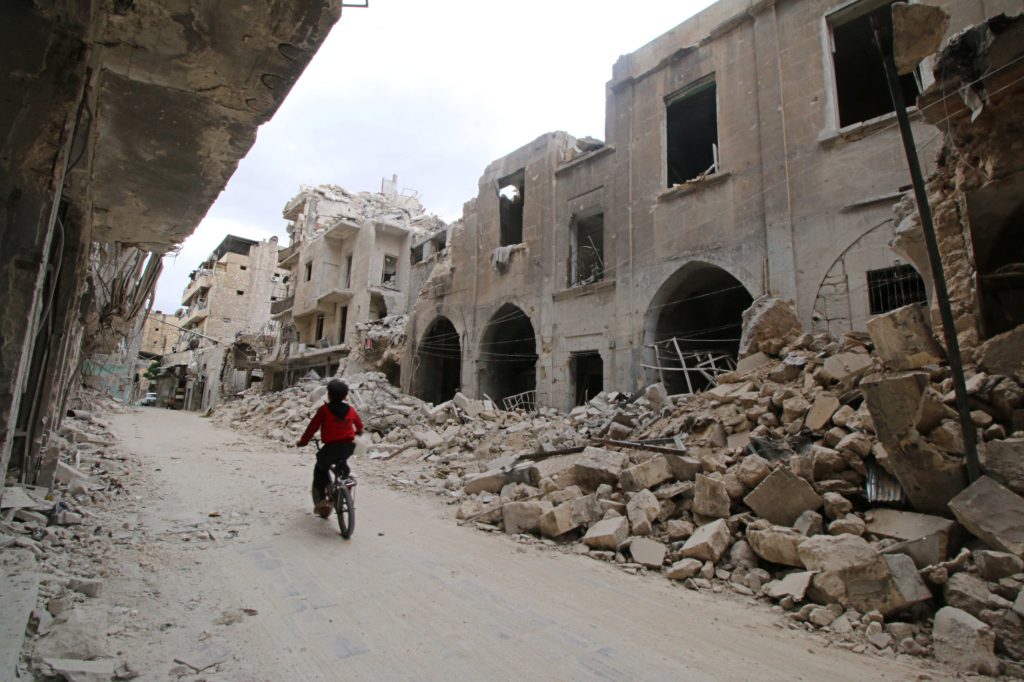 A cessation of hostilities brokered by Russia and the United States brought a measure of relief to Aleppo on Thursday, but fighting raged nearby and President Bashar al-Assad said he still sought total victory over rebels in Syria. Later in the day, an airstrike on a refugee camp and several bombings killed dozens.

Syrian state media said the army would abide by a “regime of calm” in the city that came into effect at 1 a.m. Wednesday for 48 hours, and relative calm prevailed on Thursday after two weeks of death and destruction.

The army blamed Islamist insurgents for violating the agreement overnight by what it called indiscriminate shelling of some government-held residential areas of divided Aleppo. Residents said the violence had eased by morning and more shops had opened up.

Heavy fighting was reported in the southern Aleppo countryside near the town of Khan Touman, where al-Qaida’s Syrian branch Nusra Front is dug in close to a stronghold of Iranian-backed militia, a rebel source said.

Government forces carried out air attacks on the area and rebels were attacking government positions around the town, pro-Syrian government channel Al-Mayadeen and the Syrian Observatory for Human Rights said.

A media station controlled by the Lebanese terrorist group Hizbullah, which is fighting alongside the Syrian army, said the army used a guided missile to destroy a suicide car bomb before it reached its target in that area.

Elsewhere in Syria, fighting persisted. Islamic State terrorists captured the Shaer gas field in the east of the country, the first gain for the jihadists in the Palmyra desert area since they lost the ancient city in March, according to rebel sources and a monitor.

Russian war jets were also reported to have struck terrorist hideouts in the town of Sukhna in the same Palmyra desert area.

Assad said he would accept nothing less than an outright victory in the five-year-old conflict against rebels across Syria, state media reported.

In a telegram to Russian President Vladimir Putin thanking Moscow for its military support, Assad said the army was set on “attaining final victory” and “crushing the aggression”.

The British-based Syrian Observatory for Human Rights said at least one person was killed overnight in rebel shelling of the Midan neighborhood on the government-held side of Aleppo, which was Syria’s commercial hub and largest city before the war.

But a resident of the rebel-held eastern part of the city said that although warplanes flew overnight, there were none of the intense raids seen during the past 10 days.

People in several districts ventured onto the streets where more shops than normal had opened, the resident of al Shaar neighborhood said.

The recent surge in bloodshed in Aleppo had wrecked a February cessation of hostilities agreement sponsored by Washington and Moscow, backers of the rival sides. The truce excluded Islamic State and the Nusra Front.

A spokesman for the mainstream opposition said the Saudi-based High Negotiations Committee (HNC) supported the deal but wanted the truce to cover all of Syria, not just Aleppo. It accused the government of violating it.

Later Thursday, an airstrike hit a crowded refugee camp in Syria on Thursday close to the border with Turkey, killing at least 28 people, according to Syrian pro-opposition activists. Images posted on social media said to be of the aftermath of the strike showed dead bodies, at least a dozen tents burned to the ground, and bloodied women and children being loaded onto a pickup truck.

The camp in Sarmada, in rebel-held territory the northwestern Idlib province, is home to between 1,500 and 2,000 internally displaced people who fled the fighting from the surrounding Aleppo and Hama provinces over the past year, according to activist Mohammad al-Shafie in the town of Atareb, about 7.5 miles from the camp.

The Britain-based Syrian Observatory for Human Rights said 28 died, while the Local Coordination Committees, another activist group, said more than 30 were killed.

In a statement, The White House condemned the strike.

“There is no justifiable excuse for carrying out an airstrike against innocent civilians who have already once fled their homes to escape violence,” said White House spokesman Josh Earnest at the daily press briefing. “These individuals are in the most desperate situation imaginable, and there is no justification for carrying out military action that’s targeting them.”

The attack came just hours after a twin bombing in the central province of Homs killed at least 10 people and wounded scores, state media and the regional governor, Talal Barrazi, said. A car bomb first exploded in the main square of village of Mukharam al-Fawkani, located about 28 miles east of the central city of Homs, Syria’s third-largest.

As people gathered to help the victims, a suicide bomber riding a motorcycle detonated his explosives belt nearby. Four children and three women were among those killed, Syrian state media said, and as many as 49 were wounded in the attack.

There was no immediate claim of responsibility, but Islamic State has claimed to be behind several similar deadly attacks in Homs province. The area of the blasts is close to where Syrian troops and IS gunmen have been fighting for control of the vital Shaer gas field, which fell to the Islamic State on Wednesday after the extremists overran 13 government checkpoints and captured a Syrian soldier. The Observatory said 34 government troops and 16 militants have been killed in three days of fighting there.