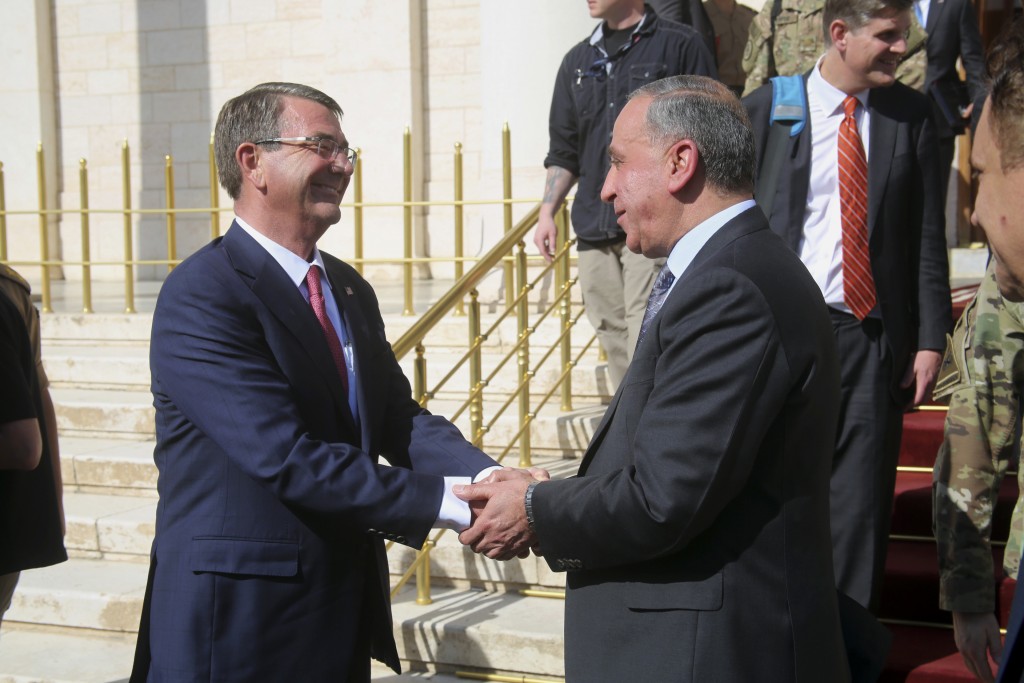 The United States has agreed to deploy more than 200 additional troops to Iraq and to send Apache helicopters for the first time into the fight against the Islamic State group in Iraq, the first major increase in U.S. forces in nearly a year, U.S. defense officials said Monday.

The uptick in American fighting forces – and the decision to put them closer to the front lines – is designed to help Iraqi forces as they move to retake the key northern city of Mosul.

Speaking to reporters Monday in Baghdad, Defense Secretary Ash Carter said the decision to move U.S. advisers to the Iraqi brigade and battalion level will put them “closer to the action,” but he said they will have security forces with them and the United States will try to reduce the risks.

A senior U.S. official said that eight Apache helicopters will be authorized to help the Iraqi forces when Iraqi leaders determine they need them. The official was not authorized to discuss the numbers publicly so spoke on condition of anonymity.

Last June the Obama administration announced that hundreds of troops would be deployed to help the Iraqis retake Ramadi – a goal they accomplished at the end of the year.

Of the additional troops announced Monday, most would be Army Special Forces, who have been used throughout the anti-Islamic State campaign to advise and assist the Iraqis. The remainder would include some trainers, security forces for the advisers, and maintenance teams for the Apaches.

The decisions reflect weeks of discussions with commanders and Iraqi leaders, and a decision by President Barack Obama to increase the authorized troop level in Iraq by 217 forces – or from 3,870 to 4,087. The advise-and-assist teams – made up of about a dozen troops each accompanied by security forces – would embed with Iraqi brigades and battalion, likely putting them closer to the front lines and at greater risk from mortars and rocket fire.

The United States, said Carter, is “on the same page with the Iraqi government” in how to intensify the fight against the Islamic State.

The proximity to the battlefront will allow the U.S. teams to provide more tactical combat advice as the Iraqi units move toward Mosul, the country’s second-largest city, still under Islamic State control. Until now, U.S. advisers have worked with the Iraqis at the headquarters level, well back from the front lines.

The Apache helicopters are considered a significant aid to any attack on Mosul. Americans will fly the helicopters – which provide air support to ground troops and carry precision weapons – another new vulnerability for U.S. forces.

Last December, Iraqis refused Apache helicopters for the battle to retake Ramadi, but this time officials said they believe the fast attack helicopters will add an important edge.

Speaking to U.S. troops at the airport in Baghdad, Carter also said that the United States will send an additional rocket-assisted artillery system to Iraq.

U.S. officials have also said that the number of special operations forces in Syria would be increased at some point, but Carter did not mention that in his comments. Officials spoke on condition of anonymity because they weren’t authorized to discuss the matter publicly.

Carter’s announcement Monday came after he met with Lt. Gen. Sean MacFarland, the top U.S. military commander for the Islamic State fight, as well as a number of Iraqi leaders including Prime Minister Haider al-Abadi and Iraq’s minister of defense Khalid al-Obeidi.

He also spoke by phone with the president of Iraq’s autonomous Kurdish region, Massoud Barzani. Later, Carter announced to the troops that the U.S. aid will extend to the Kurdish Peshmerga forces fighting in northern Iraq. Carter said the U.S. has authorized sending up to $415 million to the Kurds over time.

MacFarland told reporters that the money will be used in part to help feed the Peshmerga troops.

U.S. military and defense officials also have made it clear that winning back Mosul is critical, but will be challenging, because the insurgents are dug in and have likely peppered the landscape with roadside bombs and other traps for any advancing military.

A senior defense official told reporters traveling with Carter that while Iraqi leaders have been reluctant to have a large number of U.S. troops in Iraq, they also need certain capabilities that only more American or coalition forces can provide.

Iraqi leaders back the addition of more U.S. troops if their work is coordinated with Iraqis and directed toward the retaking of Mosul. The official was not authorized to discuss the issue publicly so spoke on condition of anonymity.

Iraq has been struggling with a political crisis, as efforts to oust the speaker of parliament failed. Al-Abadi’s efforts to get a new cabinet in place met resistance, and influential Shiite cleric Moqtada al-Sadr issued a deadline, giving parliament 72 hours to vote in a new Cabinet.

At the same time, the costs of the war against IS, along with the plunge in the price of oil – which accounts for 95 percent of Iraq’s revenues – have caused an economic crisis, adding fresh urgency to calls for reform. Iraqi officials predict a budget deficit of more than $30 billion this year.