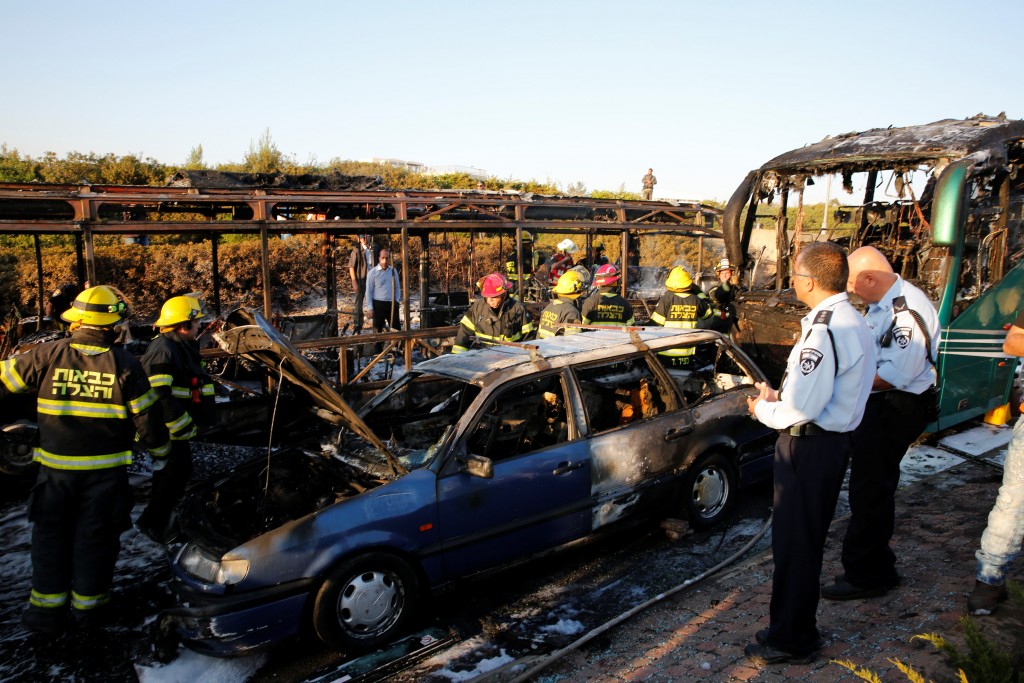 Police confirmed on Monday night that the explosion in the late afternoon on a Yerushalayim bus that wounded at least 20 people was without doubt caused by a terrorist bomb.

“There is no doubt that this was a terror attack,” Jerusalem police commissioner Yoram Halevy said. He said it was too early to know the identity of the attacker or if it was a suicide bombing.

“We are investigating where the explosive device came from, who planted it, how it got on the bus. All this is in the initial stages of investigation,” he said.

Police were investigating whether one of the critically injured in the explosion was carrying a small explosive device, according to media reports.

A doctor at Ein Kerem hospital, which was treating some of the wounded, said that some of the wounds of the victims are from nails and bolts that penetrated their bodies. It gives the impression of wounds from a terror attack,” he told Arutz Sheva.

The explosion occurred on Egged Bus No. 12 at 5:45 p.m., causing it to catch on fire while it was driving on Moshe Baram Road in Yerushalayim.

The bus that exploded was reportedly empty; those wounded were in the adjacent second bus that caught on fire as a result of the explosion.

Bus driver Moshe Levy told reporters he checked his bus for bombs twice before he started his journey. He said he was in a traffic jam when “suddenly there was an explosion in the back, I immediately understood it was a terror attack, I opened the doors of the bus so people could escape and told them to get out.”

Israeli Prime Minister Benjamin Netanyahu vowed retaliation. “We will locate those who prepared this explosive device. We will reach the dispatchers. We will also reach those behind them. We will settle the score with these terrorists.”

The blast came as jittery Israelis prepared for the Pesach amid a seven-month wave of Palestinian attacks, mostly stabbings, shootings and attacks where cars were used as weapons against civilians and security forces.

In that time, Palestinian attackers killed 28 Israelis and two Americans.

For many, the bombing was reminiscent of attacks by Hamas and Palestinian Islamic Jihad last decade when the Palestinian terror groups sent suicide bombers to detonate their explosives in buses and cafes.

Hamas, the terror group that rules Gaza, issued a statement praising the bus bombing but did not take responsibility for it. Some mosques in Gaza also welcomed the attack with messages of praise broadcast from loudspeakers.

A spokesman for Hamas in Qatar, Husam Badran, said “This attack affirms to everyone that our people will not abandon the resistance path.”

Israel says the violence is fueled by a campaign of Palestinian incitement compounded on social media sites that glorify and encourage attacks.

With reporting by the AP