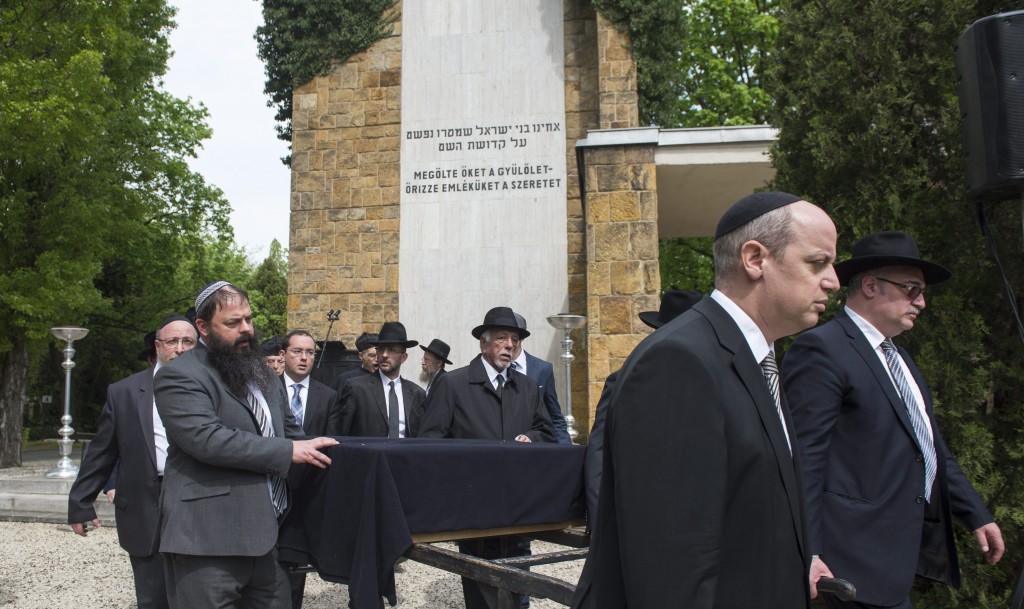 Remains of who are almost certain to be kedoshim murdered on the banks of the Danube River near the end of World War II, were buried Friday in a Jewish cemetery in Budapest.

First found in 2011, the fragments had been housed in a laboratory. However, when a news report alerted leaders of the local Jewish community of their existence a few months ago, efforts began to bring them to kevurah.

“This was a real case of a meis mitzvah d’Oraisa [a body that the Torah obligates to finder to ensure its proper burial],” Rabbi Baruch Oberlander, of Chabad-Lubavitch of Budapest, told Hamodia.

The remains were found during the renovation of Margit Bridge, which is located in an area of downtown Budapest where an estimated 3,600 mostly Hungarian Jews were executed by henchmen and allies of Hungary’s Arrow Cross, a pro-Nazi group that governed Hungary for a few months from late 1944.

“My father told us many times about how he remembers seeing the Nyilaskeresztes [Hungarian term for Arrow Cross] taking Yiddishe men, women and children to the Danube and murdering them. It was something that was burned in his memory,” said Rabbi Oberlander.

In addition to the historical record of mass murders taking place at the location, signs such as remnants of clothing, shoes and bullet holes through many of the bones left little doubt that these were indeed the bodies of murdered Hungarian Jews. Subsequent DNA tests showed that the remains were those of 21 individuals, several from one family. Furthermore, testing presented scientific evidence of many of the victims matching the biological characteristics of Ashkenazi Jews.

Based on the available evidence, Rabbi Oberlander, who serves as Av Beis Din of the Kehillas Hachareidis of Budapest, wrote an extensive teshuvah dealing with the various halachic concerns surrounding bringing the remains to rest in a Jewish cemetery, but based on the fact that the majority are “sure to be Jewish,” he concluded that there was an absolute obligation that they should be brought to “kever Yisrael.” The teshuvah gained the acclamation of several Rabbanim, including Harav Yitzhak Yosef, Sephardic Chief Rabbi of Israel.

“Once we clarified the matter, we began speaking to officials and doing everything we could to ensure that they should have a proper burial,” said Rabbi Oberlander. After meeting resistance from certain government offices, local Jewish leaders met with Budapest’s mayor, who agreed wholeheartedly to release the remains and allow for burial.

During the ceremony at the Kozma Street Jewish Cemetery, two wooden caskets containing hundreds of bone fragments were laid to rest in a ceremony that was attended by members of the Jewish community, government officials, and Christian clergy. Friday’s burial took place on the eve of Hungary’s Holocaust Memorial Day, which commemorates when Jews began to be placed in ghettos and camps ahead of their deportation to Nazi death camps.

Andras Heisler, president of the Federation of Hungarian Jewish Communities, said the burial was “the first and only case in 70 years” of bones believed to be of Hungarian Holocaust victims being found and buried.