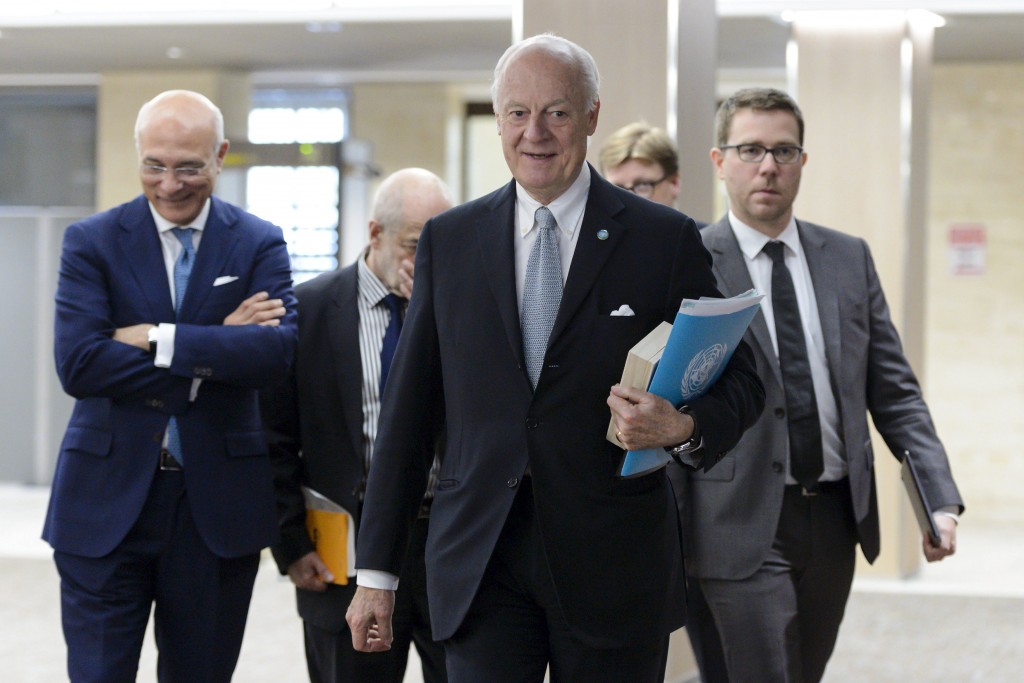 Indirect peace talks between Syria’s warring parties have resumed in Geneva to the backdrop of escalating violence in the country’s north and a refusal by the Syrian government to negotiate a transitional government, a key opposition demand.

It is the third round of so-called proximity talks this year. The U.N. envoy for Syria says the talks this time are to focus on a political transition in the war-torn country, but chances for a breakthrough are slim as distrust and continuing disagreements between rival factions remain deep.

Here’s a look at the talks:

Who Are the Main Players?

The Syrian government, which is backed by Iran, Russia and Lebanon’s Hizbullah terror group, and the main opposition faction, the High Negotiations Committee or HNC, which includes groups that are backed by Turkey, Saudi Arabia and Qatar. The Islamic State group and al-Qaida’s branch in Syria known as the Nusra Front are not taking part in the talks because they are opposed to negotiations and are considered terrorist organizations by the U.N.

The Syrian government delegation is headed by the country’s ambassador to the U.N., Bashar Ja’afari, while the HNC’s chief negotiator is Mohammed Alloush of the rebel group Jaysh al-Islam, or Army of Islam. Other opposition groups are in Geneva as well, including members of the internal opposition that has been tolerated by President Bashar Assad. All opposition groups other than the HNC were invited to Geneva by U.N. envoy Staffan de Mistura as advisers so as not to anger the HNC, which considers itself the sole representative of the opposition.

How Are the Talks Happening?

The two sides do not meet face to face. De Mistura shuffles between the two delegates in the proximity talks, taking ideas back and forth to the delegations in separate meetings held at the United Nations building in Geneva.

Can the Violence Derail the Talks?

Yes. The talks resume as fighting has escalated between pro-government forces, rebels, and the Islamic State group throughout Syria, and especially in its north. The opposition says alleged government plans to launch an offensive to capture the northern city of Aleppo will effectively spell the end of the talks. Around 30,000 displaced persons have fled from their shelters near the Turkish border this week as battles intensified between opposition fighters and the Islamic State group, according to the New York-based Human Rights Watch. The fighting in northern Syria has shaken the truce brokered by Russia and the United States that came into effect on Feb. 27, although it still holds in other areas. The first round of talks collapsed earlier in February amid a government offensive on Aleppo, Syria’s largest city and former commercial center.

What Are the Main Points of Disagreement?

The Syrian government delegation says the priority should be on fighting terrorism while the HNC says the focus should be on setting up a Transitional Government Body with full executive powers in which Assad will have no role. Syrian Deputy Foreign Minister Faisal Mekdad told The Associated Press in an interview last week that a transitional government would amount to a coup d’etat and will never be acceptable. The government says Assad was elected by the people and any talk about removing him from power is a red line. On Thursday, a day after the talks resumed in Geneva, HNC spokesman Salem Al Meslet said it accepts that members of Assad’s government could be included in a possible future transitional authority — but not Assad himself.

The Syrian Kurds, or rather, the Kurdish Democratic Union Party, PYD, and its military wing known as the People’s Protection Units, or YPG, have not been invited to the talks. The U.S.-backed YPG has been the most effective force in fighting the Islamic State terror group in northern and eastern Syria. Although they consider themselves opposed to Assad, the HNC considers the PYD and YPG as pro-government. The Syrian Kurds’ move to set up a federal region in northern Syria has angered both the government and the HNC.