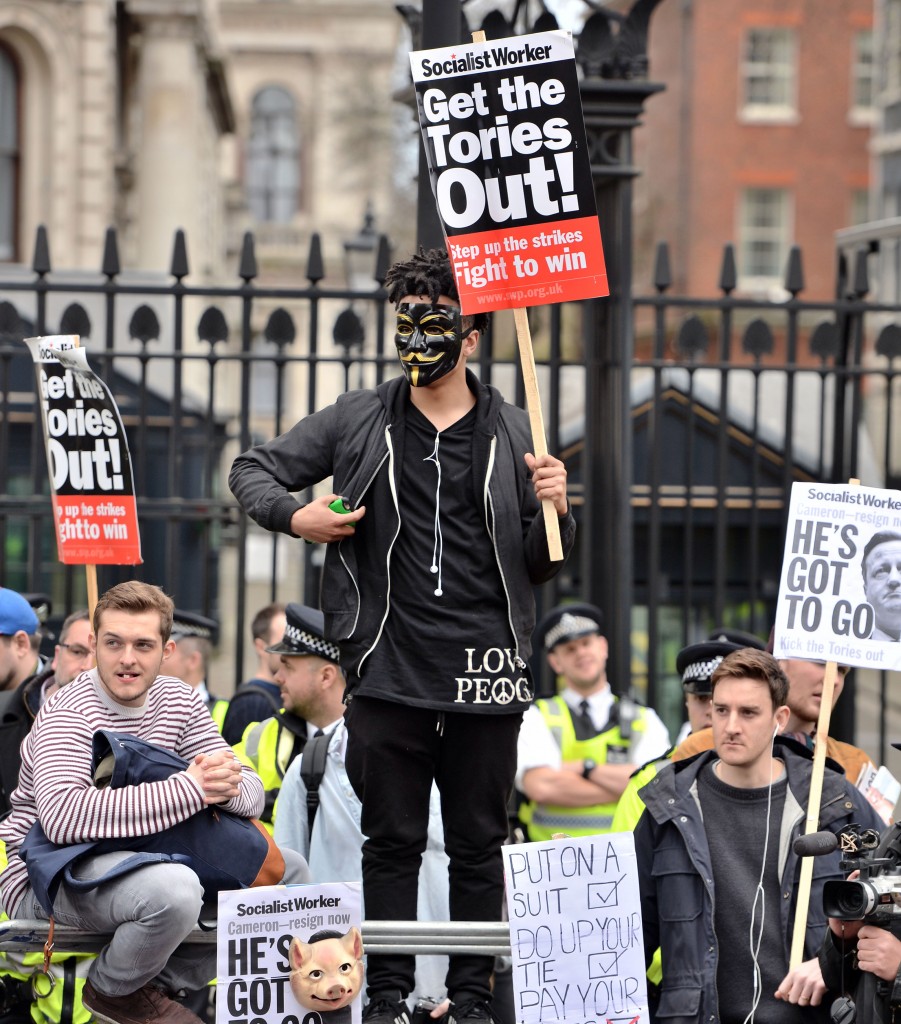 British Prime Minister David Cameron published his income tax returns for the past seven years Sunday in hopes of defusing criticism over his investment in an offshore trust run by his late father.

Cameron became the first British leader to document his financial affairs hours after he told a meeting of Conservative Party activists that he was wrong to have been so slow to acknowledge his investment in Blairmore Holdings. His father Ian, a millionaire stockbroker, organized the Bahamian investment fund with help from the Panama law firm Mossack Fonseca.

The three-page summary of the prime minister’s earnings and tax payments since 2009 showed that Cameron made 9,501 pounds ($15,297 at the time) in profits from his 2010 sale of his stake in Blairmore shortly before he became prime minister. His wife recorded an equal share of profit, allowing both narrowly to avoid paying capital tax on the shared gain.

The documents, produced by English accountancy firm RNS and published by Cameron’s Downing Street office, show that Cameron paid 75,898 pounds on taxable income of 200,307 pounds (about $310,000) in the most recent tax year.

His 2014-15 income included his prime minister’s salary and expenses of 150,356 pounds, 46,899 pounds from the annual rental of the Cameron family home, and 3,052 pounds in interest earned from savings on a deposit in a London bank.

Cameron also announced plans Sunday to create a so-called “task force” to scrutinize the involvement of U.K. consortiums and individuals in funds and companies registered by Mossack Fonseca. In a statement, he said investigators led by taxation authorities and the National Crime Agency would “deal with any wrongdoing relating to the Panama Papers.”

Earlier, Cameron issued a public mea culpa for his initial failure to confirm his investment in Blairmore. He had spent four days sidestepping questions about the issue before detailing his investment Thursday in a media interview.

“I could have handled this better. I know there are lessons to learn, and I will learn them. And don’t blame No. 10 Downing Street or nameless advisers. Blame me,” he told Saturday’s event in central London.

The prime minister is among scores of political leaders, celebrities and stars who have been linked to last week’s leak of 11.5 million pages of client files at the Panama City-based law firm Mossack Fonseca, which specializes in registering offshore companies.

Still, Cameron’s financial records published Sunday do not clarify whether he profited from other tax-avoidance vehicles overseas before 2010. And British newspapers found fresh angles to criticize his financial disclosures, including his failure to include 500,000 pounds in cash received from his family estate in three tax-free payments following his father’s death in September 2010.

The Mail on Sunday’s front page blared “Cameron Tax Bill Dodge” as it noted that he avoided paying 70,000 pounds in capital gains tax by taking his inheritance in multiple cash payments over two years rather than in a single lump sum.

Cameron has made the closure of global tax loopholes a focal point of his government, a position that fired cries of hypocrisy outside the Conservatives’ meeting Saturday.

Dozens of police formed a human barrier at the event entrance as thousands of left-wing protesters demanded Cameron’s ouster. Many protesters waved placards portraying Cameron as an out-of-touch elitist, while others held signs mocking the Panama firm with the slogan “Mossack Fonseca: Because taxes are for poor people.”

Labour Party lawmakers have already demanded that Cameron publish details of all his investment holdings since he became Conservative leader in 2005. Labour leader Jeremy Corbyn and other leading opposition figures said they would press Cameron on the issue when Parliament reconvenes Monday.

Corbyn said he would publish his own tax returns “very soon and there’ll be no surprises there.”