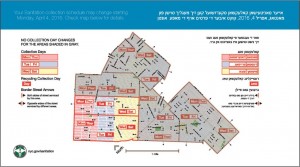 The long-heralded changes to Boro Park’s sanitation schedule is going into effect Monday morning, although officials warn that drivers may not immediately see results due to heavier than usual pre-Pesach garbage pickups.

The changes, which will remove 79 percent of the trucks servicing the neighborhood, are expected to go a long way in solving traffic jams which has taken on a crisis magnitude.

It will go into effect on Monday, Councilman David Greenfield confirmed to Hamodia, with trucks disappearing from the streets during daytime hours. Instead they will run their shifts from midnight until 8:00 a.m.

“I spoke with [Sanitation Commissioner Kathryn Garcia] just before Shabbos and she said that everything is on schedule,” Greenfield said.

The area covered by the agreement extends from 8th Ave. to 18th Ave. and from 46th Street until 61st Street. The rule change also moves Boro Park’s mostly Monday and Thursday pickup days — which upsets two days of traffic — to Wednesday and Saturday.

This article appeared in print on page 4 of the April 4th, 2016 edition of Hamodia.