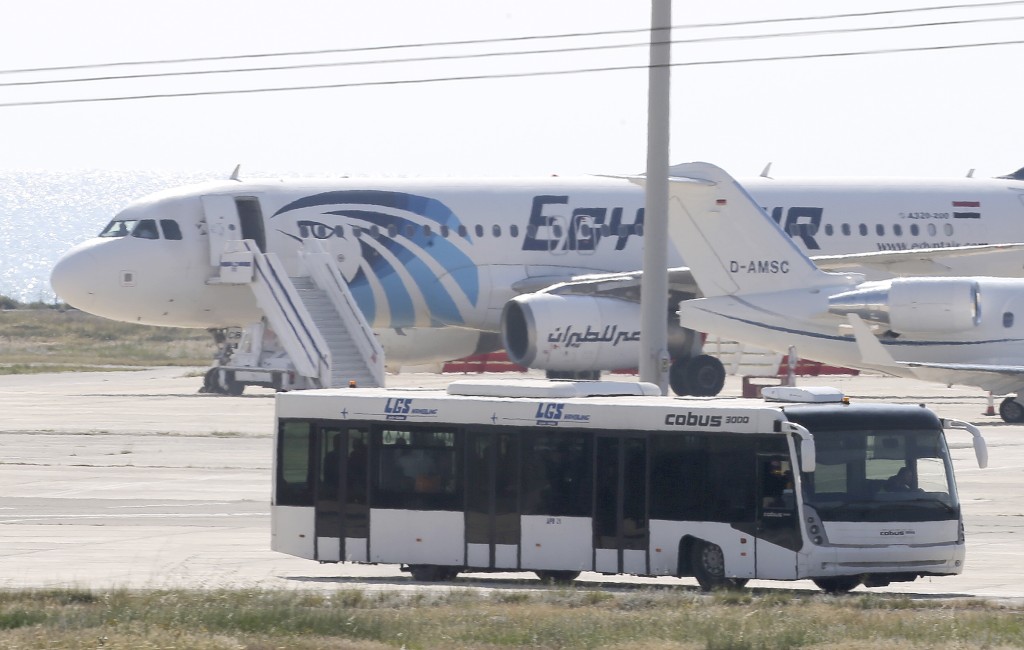 An EgyptAir plane flying from Alexandria to Cairo was hijacked and forced to land in Cyprus on Tuesday by a man Cypriot state media said was demanding the release of women prisoners in Egypt.

After the aircraft landed at Larnaca airport, the hijacker released everyone onboard except three passengers and four crew following negotiations, Civil Aviation Minister Sherif Fathy said. He declined to give their nationalities.

Eighty-one people, including 21 foreigners and 15 crew, had been onboard the Airbus 320, Egypt’s Civil Aviation Ministry said in a statement.

The Cyprus Broadcasting Corporation (CyBC) and a private broadcaster, Antenna, said the hijacker was asking for the release of women prisoners in Egypt, suggesting a political motive.

He had also asked to get in touch with European Union officials, CyBC reported, citing a letter the hijacker dropped onto the apron at Larnaca airport.

The plane remained on the tarmac at Laranca throughout the morning while Cypriot security forces took up positions around the scene.

Security sources in Egypt said a separate New York-bound flight from Cairo was delayed due to security fears related to the hijacking. They gave no more details.

While the reasons for the hijacking were not entirely clear, the incident will deal another blow to Egypt’s tourism industry and hurt efforts to revive an economy hammered by political unrest following the 2011 uprising.

The sector, a main source of hard currency, was already reeling from the crash of a Russian passenger plane in the Sinai in late October.

President Abdel Fattah al-Sisi has said it was brought down by a terrorist attack. Islamic State has said it planted a bomb on board, killing all 224 people on board.

The latest reports on Tuesday’s hijacking contradict earlier statements by Cypriot President Nicos Anastasiades and other Cypriot security sources suggesting the hijacker’s motives were personal and linked to an ex-wife who lived in Cyprus.

There was also some confusion over the identity of the hijacker. Egypt’s official state news agency MENA initially named him as Egyptian national Ibrahim Samaha but later said the hijacker was called Seif Eldin Mustafa.

The Civil Aviation Ministry said the plane’s pilot, Omar al-Gammal, had informed authorities that he was threatened by a passenger who claimed to be wearing a suicide explosives belt and forced him to divert the plane to Larnaca.

“We do not know until now if this was a threat or if he was really wearing an explosive belt,” Fethy told the news conference, adding that the hijacker was not carrying a gun.

Witnesses said the hijacker threw a letter on the apron of the airport in Larnaca, written in Arabic, asking that it be delivered to his ex-wife, who is Cypriot.

Passengers on the plane included eight Americans, four Britons, four Dutch, two Belgians, an Italian, a Syrian and French national, the Civil Aviation Ministry. The Dutch Foreign Ministry said earlier a Dutchman was among the foreigners still aboard.

Egypt said it would send a plane to Cyprus to pick up stranded passengers, some of whom had been traveling to Cairo for connecting flights abroad.

An official with a flight-tracking website says the EgyptAir flight that was hijacked on the way to Cairo showed no immediate signs of distress while in the air.

Ian Petchenik, a spokesman for FlightRadar24, told The Associated Press that EgyptAir flight MS181 flew in a typical fashion on to Cyprus, without the pilots signaling any trouble via their transponder.

Petchenik said: “It looks like a completely controlled flight aside from the fact it was hijacked.”

Israel scrambled warplanes in its airspace as a precaution in response to the hijacking, according to an Israeli military source. The planes returned to base and landed back in Israel, once it became clear the Egyptian aircraft had distanced itself from Israeli territory.

The hijacking will most likely bring to the fore again the question of security at Egyptian airports, as Egypt’s vital tourism industry is already reeling from the crash of a Russian passenger plane in the Sinai in late October.

President Abdel Fattah al-Sisi has said it was brought down by a terrorist attack. The Islamic State terror group has said it planted a bomb on board, killing all 224 people on board.

Cyprus has seen little terrorist activity for decades, despite its proximity to the Middle East.   A botched attempt by Egyptian commandos to storm a hijacked airliner at Larnaca airport led to the disruption of diplomatic relations between Cyprus and Egypt in 1978.

In 1988, a Kuwaiti airliner which had been hijacked on a flight from Bangkok to Kuwait in a 16-day seige had a stopover in Larnaca, where two hostages were killed.