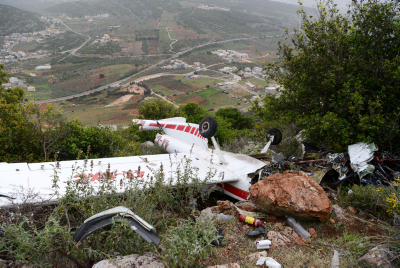 Colonel Munir Amar, 47, the director of the Civil Administration in Yehudah and Shomron, was killed in a light plane accident Friday afternoon. Amar took off in a light plane from an airfield in Haifa, and a few minutes later crashed into Mount Kamun in the lower Galilee. He was the only person on the plane.

Amar was appointed to the job of Civil Administration Director just a month ago. In that capacity, he was responsible for a large number of activities in Yehudah and Shomron, including allocating construction permits. He worked closely with members of the Yehudah and Shomron Council, and in a statement, the Council said that it mourned, “along with all of Israel, the death of Monir Amar. He served in the IDF for many years, and contributed a great deal to Israel’s security. Only recently he was appointed to the job of director of the Civil Administration, an important job for the advancement of settlement in Yehudah and Shomron. He had already developed positive ties with the heads of our communities.We send our condolences to his family and the Druze community.”

Shomron Council head Yossi Dagan said that Amar’s death “was a great loss for us. During the short time that he was director, I worked with him in an intensive manner, and we became friends. He was a true Zionist, and a great lover of [the ideal of the] settlements, and his first job was to strengthen his connection with the settlement enterprise. I would not be mistaken if I said that he was among the most well-liked heads of the Civil Administration.”