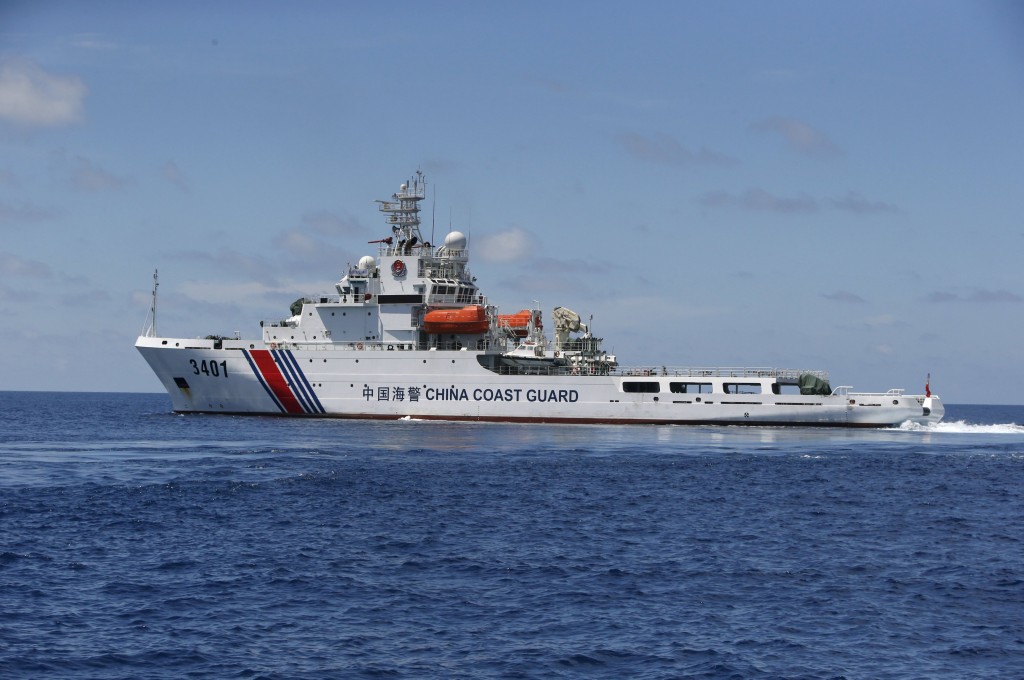 The United States has seen Chinese activity around a reef China seized from the Philippines nearly four years ago that could be a precursor to more land reclamation in the disputed South China Sea, the U.S. Navy chief said on Thursday.

The head of U.S. naval operations, Admiral John Richardson, expressed concern that an international court ruling expected in coming weeks on a case brought by the Philippines against China over its South China Sea claims could be a trigger for Beijing to declare an exclusion zone in the busy trade route.

Richardson told Reuters that the United States was weighing responses to such a move.

China claims most of the South China Sea, through which more than $5 trillion in global trade passes every year. Vietnam, Malaysia, Brunei, the Philippines and Taiwan have rival claims.

Richardson said the U.S. military had seen Chinese activity around Scarborough Shoal in the northern part of the Spratly archipelago, about 125 miles west of the Philippine base of Subic Bay.

“I think we see some surface ship activity and those sorts of things, survey type of activity, going on. That’s an area of concern … a next possible area of reclamation,” he said.

Richardson said it was unclear if the activity near the reef, which China seized in 2012, was related to the pending arbitration decision.

Asked about Richardson’s statement, Lu Kang, a spokesman for China’s Ministry of Foreign Affairs, said it was hypocritical for the United States to criticize China for militarizing the region when it carries out its own naval patrols there.

“This is really laughable and preposterous,” he said.

The Philippine Foreign Ministry said it had yet to receive a report about Chinese activity in Scarborough Shoal.

A Philippine military official who declined to be identified because he is not authorized to speak to the media said he was unaware of a Chinese survey ship in the area.

“China already has de facto control over the shoal since 2012 and they always have two to three coastguard ships there. We are also monitoring their activities and movements,” the official told reporters.

He said that was a worry given that 30 percent of the world’s trade passes through the region.

Asked whether China could respond to the ruling by the court of arbitration in The Hague by declaring an air defense identification zone, or ADIZ, as it did to the north, in the East China Sea, in 2013, Richardson said: “It’s definitely a concern.

“We will just have to see what happens,” he said. “We think about contingencies and … responses.”

The United States responded to the East China Sea ADIZ by flying B-52 bombers through the zone in a show of force in November 2013.

Richardson said he was struck by how China’s increasing militarization of the South China Sea had increased the willingness of other countries in the region to work together.

India and Japan have joined the U.S. Navy in the Malabar naval exercise since 2014, and were due to take part again this year in an even more complex exercise that will take place in an area close to the East and South China Seas.

South Korea, Japan and the United States were also working together more closely than ever before, he said.

Richardson said the United States would welcome the participation of other countries in joint patrols in the South China Sea, but those decisions needed to be made by the countries in question.

He said the U.S. military saw good opportunities to build and rebuild relationships with countries such as Vietnam, the Philippines and India, which have all realized the importance of safeguarding the freedom of the seas.

He cited India’s recent hosting of an international fleet review that included 75 ships from 50 navies, and said the United States was exploring opportunities to increase its use of ports in the Philippines and Vietnam, among others – including the former U.S. naval base at Vietnam’s Cam Ranh Bay.

But he said Washington needed to proceed judiciously rather than charging in “very fast and very heavy,” given the enormous influence and importance of the Chinese economy in the region.

“We have to be sophisticated in how we approach this so that we don’t force any of our partners into an uncomfortable position where they have to make tradeoffs that are not in their best interest,” he said.

“We would hope to have an approach that would … include us as a primary partner but not necessarily to the exclusion of other partners in the region.”