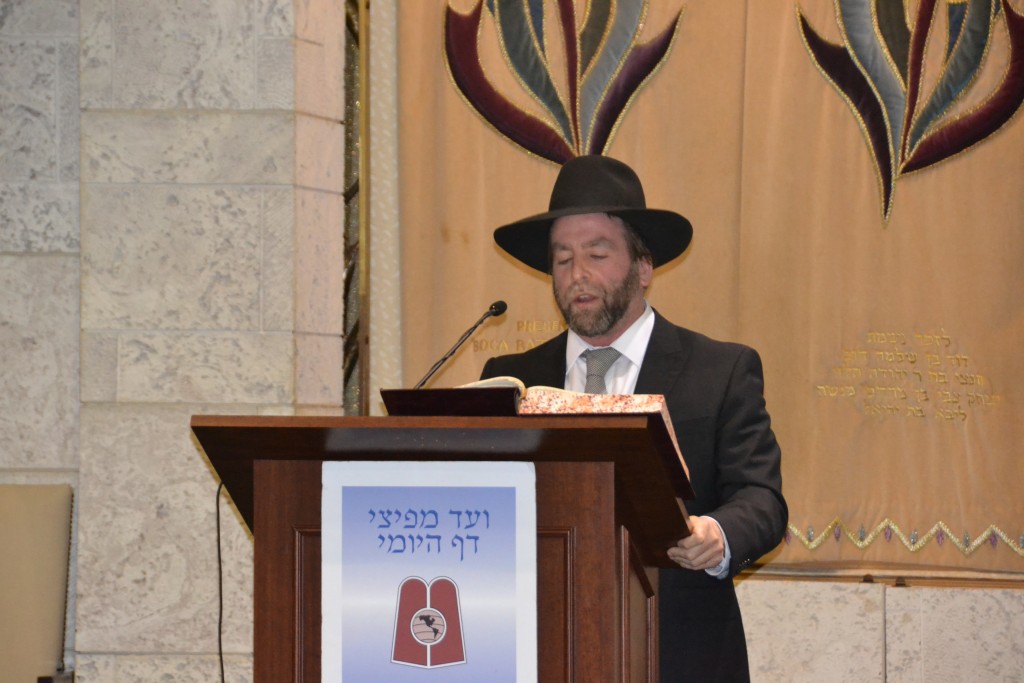 The countless yidden around the globe who learn Daf Yomi celebrated yet another milestone with the siyum of Maseches Gittin. Once again, the Daf Yomi Commission of Agudath Israel of America enabled lomdei hadaf around the world to celebrate together.

The siyum was held in The Boca Raton Synagogue in Boca Raton, Florida on Thursday evening March 10th. A large crowd of local community members attended, and the event was broadcast audio-visually in dozens of communities across the United States and around the world. Many more followed the event live online and via teleconferencing to Agudath Israel of America’s Daf Yomi and Torah Projects hotline.

The Power of Daf Yomi

“A siyum for Daf Yomi is not just a siyum for the Torah that was learned…it celebrates an inspiring unrelenting commitment, every day, of ki heim chayeinu,“said Rabbi David Shabtai who commenced the siyum. He then introduced Rabbi Ben Sugarman, the senior Daf Yomi maggid shiur in Boca Raton, to recite the Hadran. Rabbi Sugarman marveled at the beautiful event, and its significance beyond Boca Raton. He noted that the community’s dedication to Daf Yomi is exemplary, including the fact that two of its maggidei shiur are local baalebatim.

Rabbi Eliyahu Simcha Bamberger, Director of the Daf Yomi Commission, thanked the Boca Raton kehilla and its rabbonim for opening their doors for this event. He noted that it was particularly apropos that the siyum took place on Rosh Chodesh Adar, before we celebrate the “Layehudim hoysa orah,” which symbolizes Torah. “This was the dream of Rav Meir Schapiro,” he said, referring to the legendary founder of Daf Yomi, “to have Jews across the world joined by Torah.”

Wishing a warm Mazel Tov to the tens of thousands of mesaymim around the world, Rabbi Shapiro cut straight to the heart of Daf Yomi learning. He cited a puzzling Midrash, which brings a machlokes as to which passuk best encompasses the entire Torah. Ben Zoma opines that the passuk of Shema Yisroel does. Ben Nannes suggested that the passuk of “Ve’ahavta l’reacha kamocha” does. These are the responses most of us would expect.

Shimon ben Pazi, however, is of the opinion that the correct passuk is “Eis hakeves echad taaseh baboker, v’eis hakeves hasheini taaseh bein ha’arbaim,” referring to the Korban Tamid, which was brought daily – one in the morning, and one in the evening. The Midrash concludes that the halacha is like Shimon ben Pazi.

The Maharal explains that this Midrash teaches us that the core of the entire Torah is consistency. “Is that Maharal not the explanation of Daf Yomi?,” Rabbi Shapiro thundered. “There are no days off. You have to do it every day.”

“The chizuk that these siyumim give to the communities cannot be overstated,” remarks Agudath Israel’s executive director Rabbi Labish Becker. “The feedback we hear, time and time again, is incredible. It is a true Kiddush Hashem.“