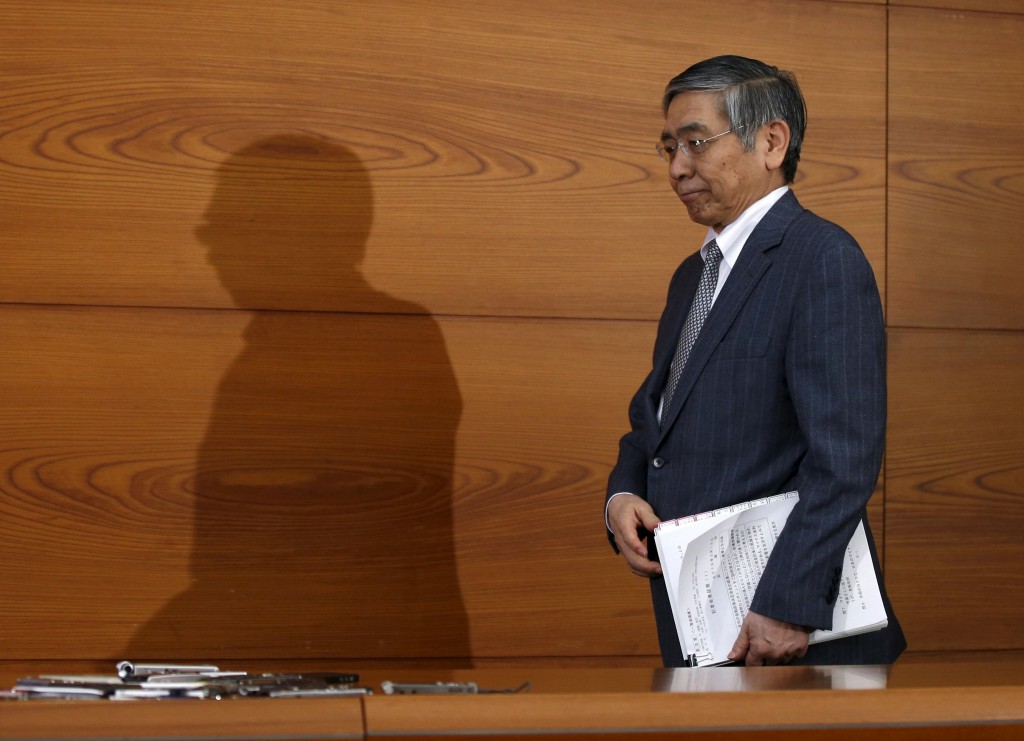 Asian stocks fell on Tuesday after the Bank of Japan painted a gloomier view of the world’s third-largest economy, but the yen firmed as policymakers appeared to back away from any imminent move to cut interest rates further into negative territory.

MSCI’s broadest index of Asia-Pacific shares outside Japan extended early losses and were down 1 percent by mid-afternoon, near the day’s lows. Japanese stocks ended down 0.7 percent.

European markets looked set to follow Asia lower, with financial spreadbetters predicting Britain’s FTSE 100 to slip as much as 0.4 percent, Germany’s DAX to fall as much as 0.3 percent, and France’s CAC 40 to ease 0.2 percent.

As expected, the BOJ’s policy board agreed to continue its massive asset-buying program at existing levels, while sounding somewhat more pessimistic about the outlook for exports, industrial output and inflation.

But the BOJ also appeared to address concerns of financial markets about its surprising and controversial decision in late January to move to negative interest rates, by removing language from its statement that it would cut rates further into negative territory if needed.

“It is noteworthy that they’ve removed language saying that they might cut interest rates further if necessary, and that they’ve decided to exclude [money-reserve funds] from negative interest rates starting in May,” said Gavin Parry, managing director at Parry International Trading.

The benchmark 10-year JGB yield rose 2.5 basis points to minus 0.025 percent. It has climbed steadily from a record minus 0.100 percent following last week’s shock statement by European Central Bank President Mario Draghi that the central bank could be done cutting interest rates for now.

Up next on the central bank roster is the U.S. Federal Reserve on Wednesday and the Bank of England and the Swiss National Bank on Thursday.

Notwithstanding the BOJ’s decision, Steven Englander, global head of G10 FX strategy at Citibank, reckons investors are more interested in the Fed statement on Wednesday to gauge how global risks stack up against an upswing in domestic activity for U.S. policymakers.

The Fed is unlikely to raise rates this week but it will likely make clear that as long as U.S. inflation and jobs continue to strengthen, economic weakness overseas won’t stop rates from rising fairly soon.

A consensus in the market is that fresh forecasts from the Fed’s 17 officials released after the meeting will signal perhaps two or three rate hikes this year, a retreat from their projection in December for four or more increases in 2016.

Financial markets are much more cautious with Fed fund futures, which are pricing in a 50 percent probability of a rate increase by June and one full rate hike by December.

The mood in credit markets also was noticeably more subdued, with investors happy to stay in high quality government debt, such as U.S. Treasuries and German Bunds, rather than venturing into higher-yielding corporate paper.

In credit markets too, a recent rally seems to be petering out. An index of high-yield credit fell after rising 9 percent over the last month.

Against the dollar, the euro slipped further from its three-week high hit after European Central Bank President Mario Draghi indicated he does not plan further cuts in interest rates.

Even oil prices, whose rebound over the last month triggered a global rally in risky assets, were running out of steam on concerns that a six-week market recovery may have gone beyond fundamentals. U.S. crude stockpiles continue to rise and Iran is seen showing little interest in joining major producers in freezing production.