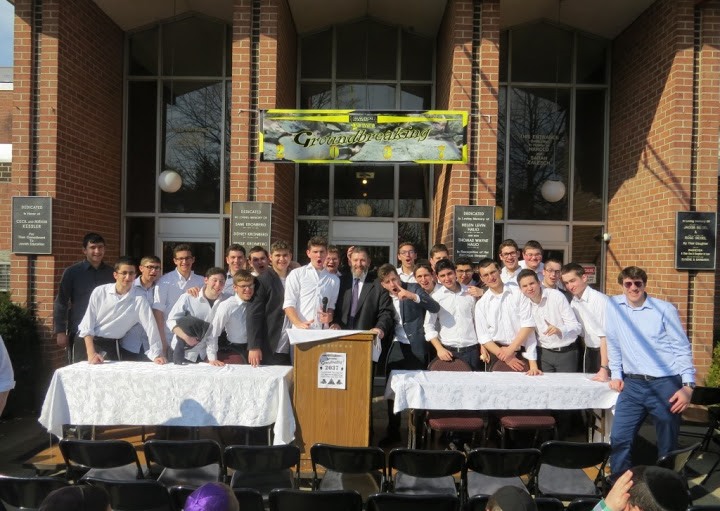 On Thursday morning, Rosh Chodesh Adar 2, every car that entered the Talmudical Academy of Baltimore campus driveway encountered a surprise. Early that morning, the TA seniors began to set up for what they hoped would be the best Purim shtick in TA history.

We all know that kal haschalos kashos – all beginnings are difficult – and TA has been planning the start of their building project for a long time. The seniors lost their patience and decided to start it themselves.

Every building project starts with a groundbreaking!

Seniors 2016 had the entire campus setup up for what looked like an official groundbreaking ceremony: The gates were covered with the flyers advertising the exciting event. Caution tape bordered the whole campus starting from the entrance. At the building’s main entrance, there were chairs set up all over the sidewalks. There was a massive banner in the front of the building announcing TA’s 2nd Groundbreakin,g taking place in the year 2037. There was a daist in front of the doors, with a lectern in the center. Inside the building in the lobby, there was a pile of dirt weighing over 2,000 lbs. cordoned off with construction netting and cones, along with a golden shovel. Caution tape in various colors was hung through the building along with the advertising signs.

Everyone who arrived was amazed in the creativity of the shtick, and some even questioned some of the Rabbeim if this was indeed the actual groundbreaking. While posing for a picture by the podium, president of the Yeshiva, Rabbi Yehuda Lefkowitz, said, “Im lo achshav, aimasi – If not now, when?”

The menahel of the Mesivta said, “This was the best Purim shtick I have seen during my TA career.”