On Eve of Super Tuesday, A Wide Range of Views Among Jews 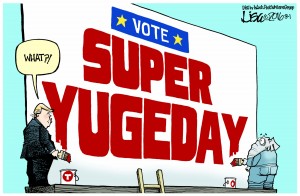 In a primary race with more chaos than any nominating process in recent memory, “Super Tuesday” is being billed as a “do-or-die” day for several candidates. Eleven states — Alabama, Arkansas, Colorado, Georgia, Massachusetts, Minnesota, Oklahoma, Tennessee, Texas, Vermont and Virginia — each get to make their picks on a day that will surely have a major impact on who the country’s choices will be for its 43rd president.

Hamodia reached out to leaders and members of the Jewish communities of a few of the “Super Tuesday” states to get an impression of the level of interest that the race has generated and how the evolution of this year’s highly untraditional primary season has affected local residents’ feelings about elections.

Rabbi Raphael Leban of Denver, Colorado, said that despite constant coverage in the media, in his experience the community seemed “uninterested.”

“A lot of it has to do with the quality of the candidates and the tenor of the election,” he said. “I think people have given up on a Republican candidate besides Trump, and he is not someone we are going to line up behind.”

Elaborating on the “frustration” that he felt had turned many people off, Rabbi Leban quoted an acquaintance of his who he felt summed up the race, saying, “It feels like all the adults have left the room.”

He added that the community did not seem to have any favored candidate and that lack of interest, though exacerbated by the nature of the race, was not out of character for Denver.

“The community in general is not very politically involved. Denver is a very sleepy place for politics,” he said, adding that this year the process was being viewed as “more of a comedy routine.”

Chaim Abrams, also of Denver, concurred, saying there “doesn’t seem to be any great interest in the elections.”

“People feel that Trump and Hillary will end up being the candidates and no one thinks that either is a great choice,” Abrams said. “Denver’s not like Boston or Chicago; we’re not too involved in politics.”

Ruby Grossblatt of Atlanta, Georgia, said that while she felt most of the frum community was backing the senator from the state’s neighbor to the south, Marco Rubio, “Most people think Trump is going to win” and, like interviewees in Denver, she “hasn’t seen a lot of excitement.”

“Part of me thinks there will be higher turnout,” she said, noting the lively and high-stakes nature of the elections, but hedged her statement, saying that victories by Hillary Clinton and Donald Trump being a foregone conclusion could discourage many from taking time to go the polls.

“To be honest, I’m surprised that I seem to be the only one talking about it; there’s really no tumult,” said Rabbi Ilan Feldman of Atlanta’s Congregation Beth Jacob. Noting that the feeling of the Jewish community seemed mirrored in the general population, he mentioned that he has seen very few lawn signs for candidates and had just last week heard the first radio ad targeting Georgia voters.

Rabbi Feldman said that the Orthodox community mostly reflects the largely conservative nature of the state’s general population. He added that his congregants were heavily focused on candidate’s records on Israel and share Georgia’s specific concerns over increasing levels of immigration.

The lack of political interest that interviewees reported in Atlanta and Denver’s communities was not shared by Jews of Texas.

“I can tell you that the biggest yetzer hara for people this Shabbos was not to talk politics, it’s definitely foremost on everybody’s mind,” said Rabbi Yaakov Rich of Dallas’ Congregation Toras Chaim. Dallas’ frum community, he said, is largely in step with the deeply conservative political beliefs of much of the Lone Star State, home to Tea Party favorite Sen. Ted Cruz. However, he added that there was no commonly preferred candidate among the three major Republican contenders.

Rabbi Rich said that while the community gives high priority to issues common to Orthodox Jews throughout the country, such as the policy towards Israel and school vouchers, in keeping with the state’s cowboy heritage, “Everybody is very passionate about the right to bear arms.”

Michail Ekshtut, a Dallas native, said, “People are definitely talking about the elections, but I don’t know how specific it is to the primaries; they’re watching it nationally.”

He concurred on the solidly conservative nature of the kehillah, saying, “Nobody is too interested in Hillary or Bernie,” and posited that the “contentious” nature of the race would result in higher turnout than usual for the primary voting.

In the deep Blue state of Massachusetts, Rabbi Tzvi Gluckin said that the large and diverse Orthodox community is divided both on party affiliation and candidates.

“On the left, there are a handful of people who want Sanders, but most are more establishment and are into Hillary,” he said, adding that, among Republican voters, Donald Trump was the name that he felt has been the most talked about and favored.

“At the beginning I thought he [Trump] was going to be a joke, but he seems to be hitting a real chord with a lot of people,” said Rabbi Gluckin. “It’s certainly looks like it’s going to be interesting.”

This article appeared in print on page 1 of the March 1st, 2016 edition of Hamodia.