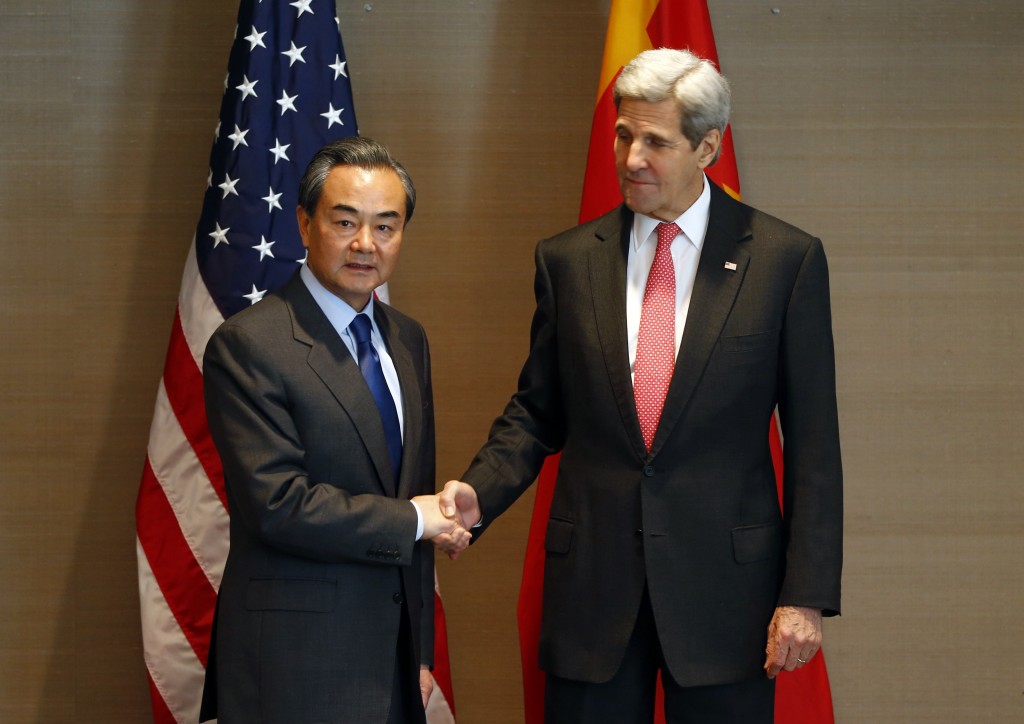 The top diplomats of the U.S. and China meet Tuesday in Washington, at a fraught time in relations between the two world powers. It’s been seven weeks since North Korea conducted a nuclear test and the two still haven’t agreed on how to censure Pyongyang.

Tensions are also rising in the South China Sea, ever since Beijing deployed anti-aircraft missiles on a disputed island. Secretary of State John Kerry and Chinese Foreign Minister Wang Yi sparred over much of the same territory a month ago in Beijing. But as they sit down for more talks at the State Department, both situations have only grown more serious.

North Korea followed up its Jan. 6 underground nuclear explosion with a Feb. 7 rocket launch that was condemned by the U.N. Security Council because such rockets use technology which could be applied to ballistic missiles.

While China has joined in the international criticism, it has balked at imposing the kind of tough economic sanctions that the U.S. wants, fearing it could threaten the stability of North Korea, a neighbor and traditional ally of Beijing.

In the meantime, the U.S. has taken tougher steps of its own. Congress passed the most stringent U.S. sanctions yet, ones that aim to restrict North Korean leader Kim Jong Un’s access to hard currency. The restrictions could hurt Chinese banks and companies that do business connected to the North’s nuclear and missile programs and its human rights abuses of workers. President Barack Obama signed the bill into law last week.

And on the security front, the U.S. and close ally South Korea have begun talks on deploying a missile defense system that China fears could be used against it as well as against North Korea.

The U.S. and China are expected, eventually, to fashion a compromise over the U.N. resolution, as both sides oppose North Korea’s development of nuclear weapons and the missiles used to deliver them. But the two seem to be leagues apart on the South China Sea issue. Washington and Beijing have been trading accusations of “militarizing” those waters, an important thoroughfare for world trade where six Asian governments have competing territorial claims. The accusations intensified last week following reports that China had deployed anti-aircraft missiles on Woody Island in the Paracel chain, which is occupied by China but also claimed by Taiwan and Vietnam. The U.S. and its Asian allies are now watching to see whether China will put military assets on the artificial islands it has built in the Spratly island chain, further south.

A couple of U.S. Navy operations close to disputed land since October have already riled Beijing. Chinese Foreign Ministry Spokeswoman Hua Chunying said Monday that “reconnaissance” by U.S. ships and planes, not China’s actions, were responsible for stoking tensions in a region where the U.S. is not a claimant. “The deployment of defense facilities on China’s own territory is no different from what U.S. does in Hawaii,” she said.

For its part, the Obama administration is under congressional pressure to step up the U.S. response. Lawmakers are expected to raise their concerns at a Senate Armed Services Committee hearing Tuesday with the commander of U.S. forces in the Pacific. State Department Spokesman Mark Toner said Monday that the U.S. would continue to press China to stop its militarization in the South China Sea. He called for a diplomatic process that will settle the territorial claims peacefully.