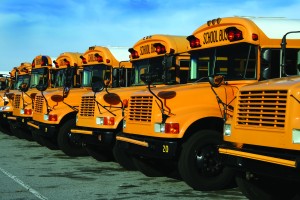 Talk of a potential deal that could save Lakewood’s embattled courtesy busing program is providing a glimmer of hope for the roughly 10,000 children who , at present, stand to lose transportation at the end of next week. However, as township and state authorities haggle over who should foot the $6.2 million bill, the long-discussed prospect of its cancellation still seemed like a very real possibility.

On Sunday, amid growing public turmoil over the cancellation, which many feel will throw the town into chaos and create a safety hazard for students, the Asbury Park Press reported that the state is considering supplementing the needed funds if Lakewood’s Township Committee is willing to contribute $2.5 million.

Committeeman Meir Lichtenstein told Hamodia on Monday that such a deal is “possible,” but said that the choice to commit additional township funds was a “difficult decision to make.”

“On the one hand, we feel we’re getting squeezed, but what are we going to do with these 10,000 kids? They’re going to be the ones who lose,” he said.

An additional fear expressed by Mr. Lichtenstein was that even if funds were committed, “Will they lose [busing] anyway in a few months?”

That scenario seems hardly hypothetical, as the present crisis erupted only months after a deal was reached at the end of the summer, intended to secure the service. At that time, the township agreed to contribute $1 million in surplus reserves, but higher-than-expected rates from busing companies made the plan untenable for the entire school year. Despite reservations, Lichtenstein said that the township felt a need to “lean towards safety.”

Local leaders and askanim blame the present financial crisis on the state’s funding freeze enacted in 2011, meaning that the amounts given each year have not been adjusted to match increased school populations since then. In addition to the rise in non-public-school children from the Orthodox community who receive financing for busing, special education and a smattering of other services, public school enrollment has increased by 500 to 600 since the freeze.

The state BOE has been unwavering in its position that they do not bear responsibility for providing the non-mandated service.

“The Department has stated that courtesy busing does not fall under the category of a ‘thorough and efficient’ education and, as such, there is no state funding for courtesy busing,” Michael Yaple, director of Public Information for the New Jersey DOE, told Hamodia. He cited a vote held last month that would have raised taxes in order to cover the present busing arrangement. Local leaders urged voters to reject the measure, which was defeated by 99 percent of the electorate.

“It’s entirely a local decision to fund courtesy busing, and local voters have rejected that proposal … Besides assistance from the township’s surplus account, the township could also look into reducing the need for courtesy busing through efforts such as additional sidewalks, crossing guards, a township-wide transit system, or covering all or part of the costs of courtesy busing needed for safety reasons,” he said.

Transportation is only mandatory for students who live two miles or more from their schools. The district has traditionally provided the service using extra funds as a “courtesy,” as do many districts in New Jersey. If the service is canceled, it will affect an estimated 2,700 public school students and 7,100 who attend local mosdos.

“I think that whether there is courtesy busing or not, learning will go on and kids will get to school, but I am worried that some people will send their children on bikes or by walking, which in Lakewood can be treacherous,” said Mr. Zlatkin, referring to the town’s lack of sidewalks in many areas and scarcity of crossing guards.

Mr. Lichtenstein said that the township “does not have a plan” to deal with the possibility of cancellation of service.

“The state did not give us enough time … you can’t just come and tell us that there are going to be 10,000 kids on the streets,” he said.

Parents who stand to be directly affected have begun to consider their options, but expressed frustrations over the prospect.

“I do not have a problem with kids walking to school, but two miles is a bit much for children in kindergarten through eighth grade,” said a parent whose daughters stand to lose their transportation services. “I feel there has to be more transparency. We have such high property taxes as it is — where is that money going?”

Others considered carpooling options and weighed the effects this would have on people’s daily lives, as well as on the town as a whole. Others said that they were comfortable with older children walking, but would only send younger ones along if routes to schools had sufficient crossing guards provided.

“I’ll survive, but it’s a tremendous inconvenience for people with little children, never mind the traffic, honking and pollution,” said one mother.

Mr. Lichtenstein said that whether a deal between the township and the state would go through should become clear by the end of the week, but that the leadership was hoping any arrangement would provide a long-term solution to the district’s perennial busing woes.

“We’re not going to cure the problem, but we can’t have it come up every six months,” he said. “There has to be some movement from the state. We need to see that they are committed and engaged in addressing the issue.”

This article appeared in print on page 26 of the February 17th, 2016 edition of Hamodia.