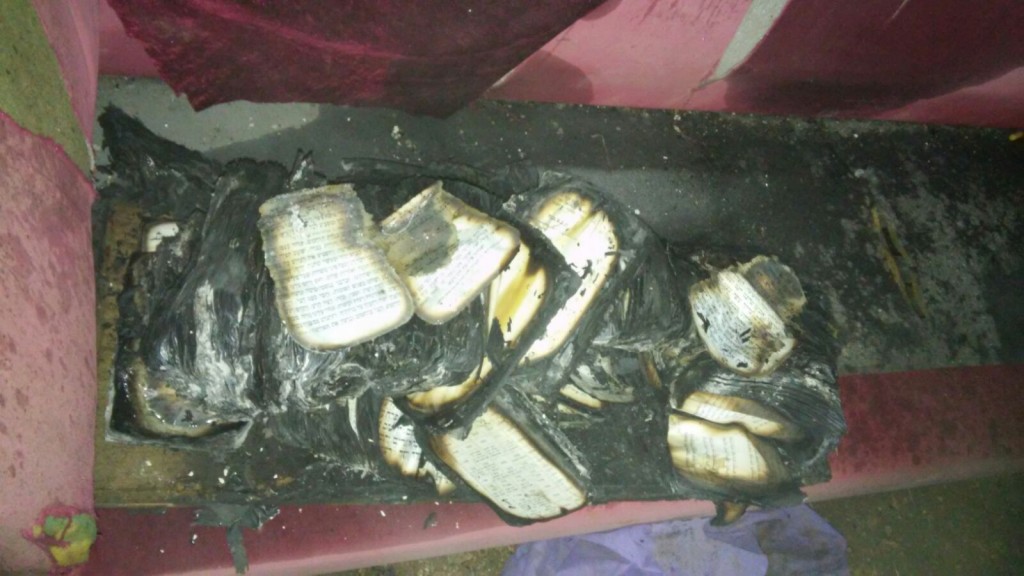 Israeli officials demanded immediate international condemnation of an arson incident that took place Friday night, when Arabs set fire to a shul in the community of Carmei Tzur in Gush Etzion. In a statement Motzoei Shabbos, Prime Minister Binyamin Netanyahu said that Israel “would bring those responsible for this hate crime to justice. I expect the international community to condemn this desecration of a shul.”

The shul, housed in a temporary structure in the Givat Soreq area on the periphery of Carmei Tzur, was established last year in memory of the three teens murdered by Hamas – Naftali Frenkel, Gilad Shaer and Eyal Yifrach, Hy”d, in June 2014 – that was an impetus to Operation Protective Edge.  According to Carmei Tzur officials, the shul is used daily. It was erected in view of the cave where the bodies of the three teens were found after a week-long search.

Congregants said that the Arabs placed the sefarim in a pile and set fire to them. Residents noted that Arabs have set fire to the shul in the past. The building sustained heavy damage, and many sefarim and siddurim – including a sefer Torah – were burned in the fire.  IDF troops began hunting for the culprits, with the search centering on the village of Halhoul. No arrests have been made yet.

In a statement, President Reuven Rivlin said that “the sight of the desecrated sifrei Torah was so depressing. The hurt is even worse, as the sefer Torah and the synagogue were dedicated to the memory of our boys who were murdered by the cruel terrorists. I am relying on security forces to bring these terrorists to justice quickly.”

Speaking on Army Radio Sunday morning, Defense Minister Moshe Ya’alon said that that was exactly what the army would do. “The sight of the destroyed holy books and the destroyed synagogue are shocking,” he said. “Those who educate their youth to hate Jews are responsible for this. The defense establishment will find these arsonists, and we will know what to do with them.”

Education Minister Naftali Bennett added that “the images of burnt holy books in a synagogue are taken straight out of the darkest nights of our people’s history.”

Writing in a social media post, Knesset Speaker Yuli Edelstein called the arson “a barbaric act that has no equal. Unfortunately, this is not the first time Arabs have set fire to this synagogue. Once again we see the fruits of incitement against anything having to do with Jews.”

In her own social media post, Bat-Galim Shaer, mother of the murdered Gilad, Hy”d, wrote that “the desecration of a sefer Torah is an injury to the soul of the Jewish people. Those who seek to harm our bodies think nothing of attacking our spirit. We will continue to choose life and lift up the spirit of the Jewish people, which is stronger than ever.”