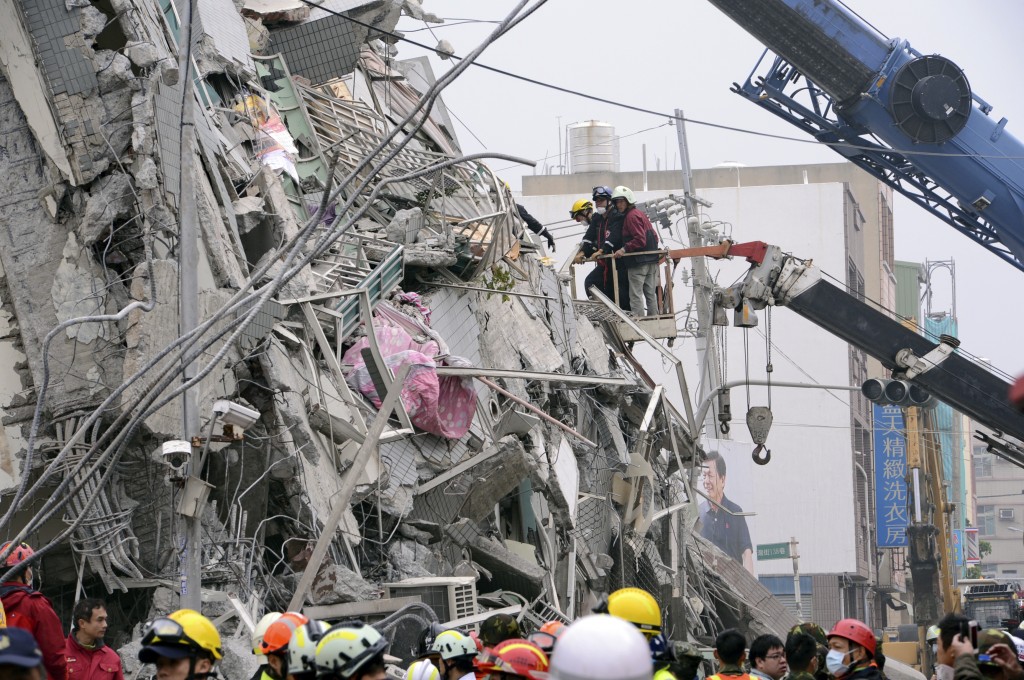 Rescuers on Sunday found signs of live within the remains of a high-rise residential building that collapsed in a powerful, shallow earthquake in southern Taiwan that killed at least 18 people and injured hundreds.

The emergency center in Tainan, the worst-hit city, estimated that 132 people were still missing more than 24 hours after the magnitude-6.4 quake struck at dawn Saturday.

Tainan Mayor Lai Ching-te said in interviews from the site of the building collapse that life detecting equipment had found signs of life from at least 29 trapped people.

Rescuers had already pulled out at least 247 survivors from the collapsed building. They were among more than 340 people rescued throughout Tainan, where nine other buildings collapsed and five careened, the city government said.

Taiwan’s Central News Agency reported that 484 people had been injured, although most of these had been released from hospitals by Saturday night.

The spectacular fall of the 17-story high-rise immediately raised questions about its construction, and Taiwan’s interior minister said there would be an investigation.

Rescuer Jian Zhengshun said the work was difficult because part of the building was believed to be buried underground, with the quake loosening the earth. He said rescuers had to clear rubble for passages to reach people who were trapped.

The quake came two days before the start of Lunar New Year celebrations that mark the most important family holiday in the Chinese calendar. The collapsed building had 256 registered residents, but far more people could have been inside when it fell because the population might have swelled ahead of the holiday, when families typically host guests.

Local media said the building included a care center for newborns and mothers, and a 10-day-old infant was among those confirmed dead in the disaster.

Tainan resident Lin Bao-gui, a secondhand car salesman whose cars were smashed when the building collapsed across the street from him, said his house first started “shaking horizontally, then up and down, then a big shake right to left.”

“I stayed in my bed but jumped up when I heard a big bang, which was the sound of the building falling,” he said.

The operators of Taiwan’s high speed rail announced Sunday that the service would resume full operation from noon. The earthquake had damaged power lines near Tainan Station and caused major disruption to the system at a busy time when many people were returning home to celebrate the Lunar New Year.

Following the collapse of the residential high-rise, questions surfaced about whether construction of the 1989 structure had been shoddy. Tainan’s government said the building was not listed as a dangerous structure before the quake, and the interior minister, Chen Wei-zen, said an investigation would examine whether the developer had cut corners.

Earthquakes frequently rattle Taiwan, but most are minor and cause little or no damage. However, a magnitude-7.6 quake in central Taiwan in 1999 killed more than 2,300 people.