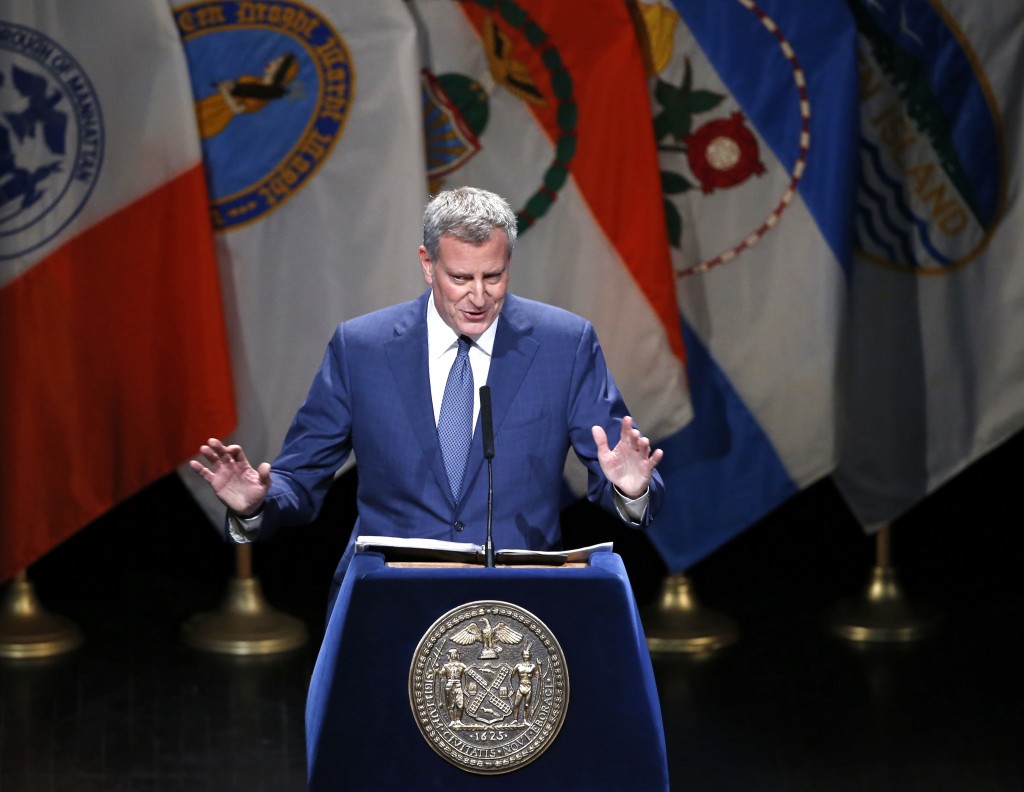 Mayor Bill de Blasio, beginning his third year in office with middling poll numbers and stubborn political problems, delivered his annual State of the City address Thursday night, highlighting the steps his administration has taken to make the city safer and more equitable.

De Blasio, a Democrat, also outlined a series of ambitious policy proposals for the year ahead, including the creation of a retirement fund for private-sector employees, a renewed commitment to solar energy and new cultural and commercial development for a landmarked island in New York Harbor. But the centerpiece was something de Blasio had previously largely eschewed: a big public works infrastructure project that will live on long after he leaves office.

He unveiled plans to build a 16-mile streetcar line that will connect the waterfronts of Brooklyn and Queens, formerly gritty industrial areas that have been transformed into bustling residential neighborhoods.

“We’re now seeing explosive growth on the waterfront in Brooklyn and Queens,” he said. “Today, we take the next great step in connecting New Yorkers to the heart of our new economy for New York.”

The line, estimated to cost $2.5 billion and not open until 2024, is the first major construction project that could act as a marker of de Blasio’s legacy. It’s expected to have a top speed of 12 mph and cost far less than building a new subway line.

Experts were largely supportive of the plan. They noted the streetcar system was badly needed in the increasingly dense area along the East River where residents of hip neighborhoods such as Long Island City in Queens and DUMBO in Brooklyn no longer work in Manhattan but are forced to commute into it circuitously thanks to a gap in subway coverage. The modern-day trolley would run by some of the city’s largest public housing developments, providing 40,000 transit-starved, low-income residents with a way to commute to job centers in the outer boroughs.

Mitchell Moss, an expert in urban planning and policy at New York University, called the proposed streetcar system a “project of enormous importance” but noted it faced engineering, political and financing obstacles.

The proposed route contains a number of 90-degree turns that may be difficult to navigate for a streetcar; getting a number of community boards to sign off will likely be a time-consuming and politically difficult endeavor; declaring the area a special district so as to finance the project could take some time; and some critics argue the money would be better spent on subway repairs.

The self-powered streetcars, funded with $2.5 billion in city money, will likely be financed by bonds issued by a city authority created to manage the project, officials said.

“Streetcars are not new to New York City,” said Harry Schechtman, a former city transportation official who noted the last one ran in 1957. “This will be the next generation streetcar. It’s not your grandfather’s streetcar.”

Among de Blasio’s other proposals:

The mayor, who touted falling crime rates and booming job growth, broke with tradition and held the speech at night in hopes of attracting a larger audience. He spoke in a 2,300-person-capacity Bronx college auditorium packed with supporters and city employees while flanked by video screens displaying images of his administration’s accomplishments from raising wages to filling potholes.

“Our mission is to put the powers of City Hall to work to help all of our neighborhoods thrive and prosper,” the mayor said. “Our challenge is to make our great city greater still.”

Hours before the speech, a deal to restrict horse carriages to Central Park collapsed, delivering a blow to the mayor, who had spent more than two years trying to fulfill a campaign promise he had pledged to accomplish “on Day 1” of his term. It was unclear if negotiations would resume.

And as de Blasio was speaking, two police officers were shot a few miles away. He was informed of the shooting as he stepped off the stage and raced to the hospital.