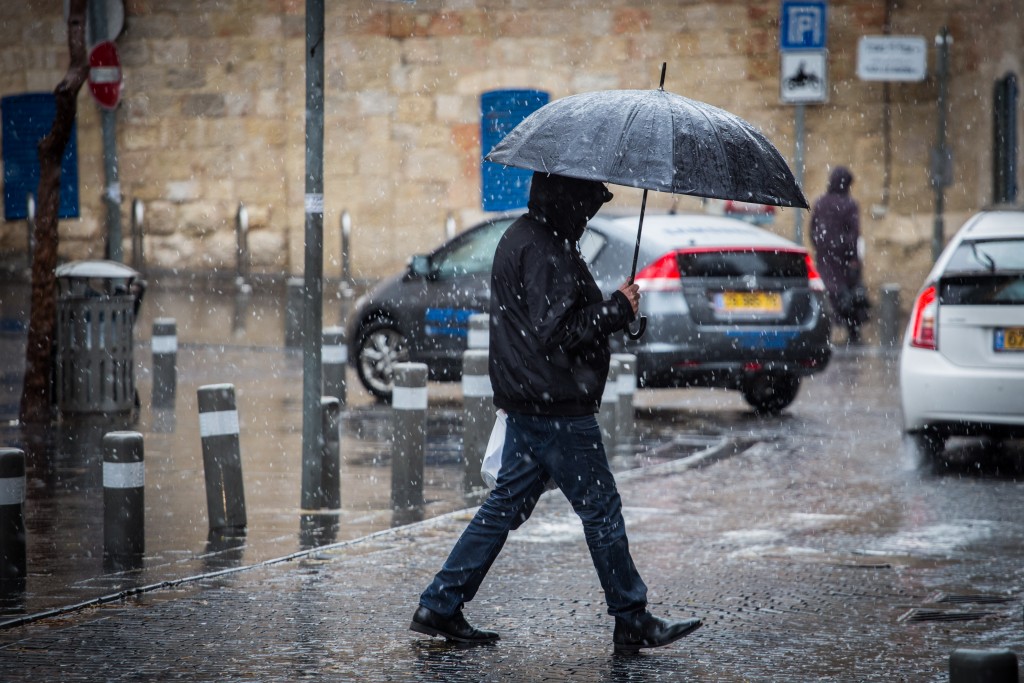 The Israel Electric Corporation (IEC) on Monday declared a state of emergency in Yerushalayim as the capital braced for a third day of stormy weather that promised a blanket of snow by Tuesday morning.

The city saw almost two inches of rain and Monday, as well as some snow, but that didn’t stick on the ground.

IEC Director Yiftah Ron-Tal informed Prime Minister Binyamin Netanyahu and Energy Minister Yuval Steinitz on Monday that a situation room has been opened in Yerushalayim in anticipation of energy outages.

The corporation is reinforcing ground crews, as well as its staff on the 103 telephone hotline for emergencies.

Meanwhile, there was snow on the ground in the Golan Heights and Mount Hermon, and about 3 inches of snow accumulated on high elevations in the Galil. There was flooding in the Negev, and rain, cold and strong winds elsewhere in the country.

Surprisingly, though, the Kinneret remained below capacity, according to the Hydrological Service.

“We are already at the end of January, and the level is only 6.7 inches above the lower red line. That is not good, and it’s concerning. This year, as in the past few years, the main rain systems have been in the center and the south, and the north has simply not had enough rainfall,” a senior Water Authority official said on Monday.

Dr. Amir Givati, manager of the Surface Water Department in the Hydrological Service, said, “Unless February and March are rainy enough in the north of the country and in a way that the situation in the Kinneret and its surroundings changes, this will be the third successive year to be declared dry in the Kinneret and the northern region.”

Nevertheless, the relatively dry north will not threaten the country with a water shortage.

Israel’s five desalination plants – in Ashkelon, Palmahim, Sorek, Ashdod, and Hadera – now provide most of the water for household drinking and bathing each year.

The Water Authority says that thanks to desalination and the expanded use of gray water, the amount of water drawn from the Kinneret has been substantially reduced, as is the drawing of water from the coastal and mountain aquifers.