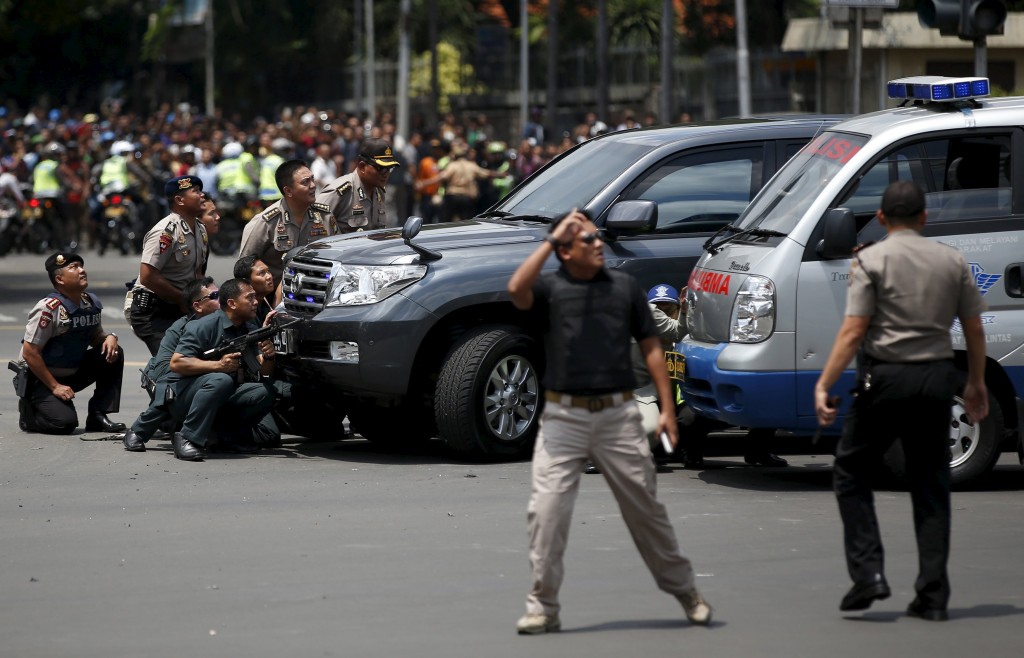 Islamic State terrorists launched a gun and bomb assault on Indonesia’s capital on Thursday, police and media said, marking the first assault on the Muslim-majority country by the terror group, but five of the seven people killed were the terrorists themselves.

It took security forces about three hours to end the siege near a Starbucks cafe and Sarinah’s, Jakarta’s oldest department store, after a team of around seven terrorists traded gunfire with police and blew themselves up.

A police officer and a Canadian man were killed in the attack. Seventeen people, including a Dutch man, were wounded.

Two of the terrorists were taken alive, police said.

“Islamic State fighters carried out an armed attack this morning targeting foreign nationals and the security forces charged with protecting them in the Indonesian capital,” Aamaaq news agency, which is allied to the group, said.

Jakarta’s police chief told reporters: “ISIS is behind this attack definitely,” using a common acronym for Islamic State, and he named an Indonesian terrorist called Bahrun Naim as the man responsible for plotting it.

The drama played out on the streets and on media screens, with at least six explosions and a gunfight in a central location.

“The Starbucks cafe windows are blown out. I see three dead people on the road. There has been a lull in the shooting but someone is on the roof of the building and police are aiming their guns at him,” Reuters photographer Darren Whiteside said as the attack unfolded.

Police responded in force within minutes. Black armored cars screeched to a halt in front of the Starbucks and sniper teams were deployed around the neighborhood as helicopters buzzed overhead.

Indonesia has seen attacks by Islamist terrorists before, but a coordinated assault by a team of suicide bombers and terrorists is unprecedented and has echoes of the sieges seen in Mumbai seven years ago and in Paris last November.

The last major terrorist attacks in Jakarta were in July 2009, with bombs at the JW Marriott and Ritz Carlton hotels.

The country had been on edge for weeks over the threat posed by Islamist terrorists. Counter-terrorism police had rounded up about 20 people with suspected links to Islamic State, whose battle lines in Syria and Iraq have included nationals from several Asian countries.

Indonesia has the world’s largest Muslim population, the vast majority of whom practice a moderate form of the religion.

The country saw a spate of militant attacks in the 2000s, the deadliest of which was a bombing on the holiday island of Bali that killed 202 people, most of them tourists.

Police have been largely successful in destroying domestic terror cells since then, but officials have more recently been worrying about a resurgence inspired by groups such as Islamic State and Indonesians who return after fighting with the group.

Alarm around the world over the danger stemming from Islamic State rocketed after the Paris terror attacks and the killing of 14 people in California in December.

Among those arrested in Indonesia’s crackdown late last year was a member of China’s Uighur Muslim minority with a suicide-bomb vest. Media said two other Uighur suspects were on the run.

Indonesian security forces have also intensified a manhunt for a terrorist leader called Santoso, regarded as Indonesia’s most high-profile backer of Islamic State, in the jungles of Sulawesi island. Santoso had threatened tunleash attacks in Jakarta.