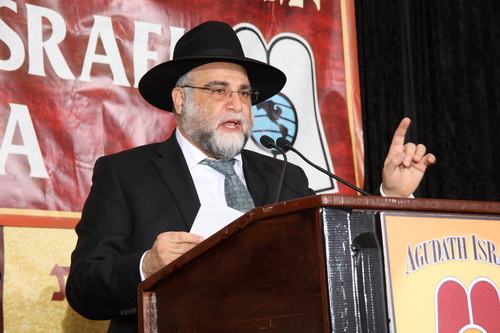 In an unprecedented move during their annual dinner last night, Yeshivah Orchas Chaim announced that parents banded together to provide a raise for the dozens of Rabbeim and Menahlim for this year and the coming years.

After listening to an address by Rabbi Dovid Ozeri at the Agudah convention encouraging Mosdos to give raises to their Rabbeim, some parents in Orchas Chaim decided to put the idea into motion.

A couple of Baalei Batim (not being named upon request) were approached, and immediately donated tens of thousand of dollars towards a raise for the 53 Rabbeim and Menahelim.

However, in just days, the momentum grew tremendously, and Baalei Batim managed to put together hundreds of thousands of dollars to ensure the Rabbeim had a steady raise each year.

With the amounts donated and pledged, the Yeshivah announced a steady raise of $10,000 each year, starting with $5,000 this year. In fact, enough funds were already raised to cover the full $5,000 raise for this year.

“It’s truly amazing,” an Askan involved with the project told TLS. “This is besides the tuition and dinner pledges.”

In addition to the raise, the Yeshivah has also opened a parent-funded Simcha Fund for the staff.

Each Rebbe making a wedding will receive $10,000 from the fund, and $2,500 will be given to the Rabbeim making a Bar Mitzvah.

Two of the sponsors of the program have already pledged to give $50,000 for the next three years, and more and more parents are getting involved.

“Hopefully parents from other Yeshivahs will follow, bringing much-needed relief to those we entrust with our most valuable assets,” a parent told TLS.