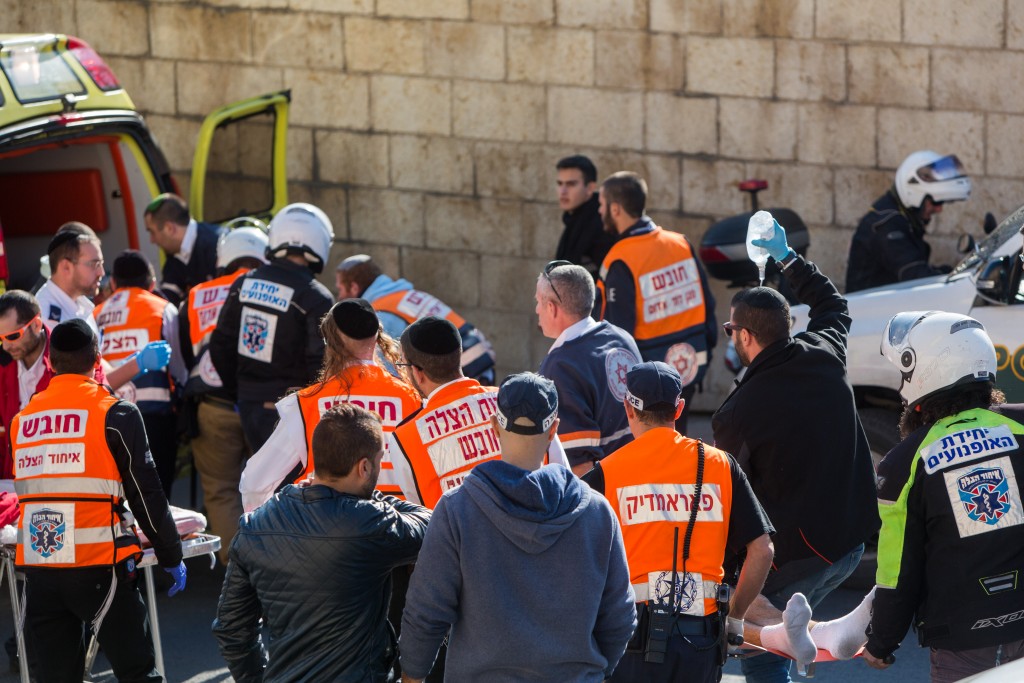 The levayos for the two victims of Wednesday’s stabbing attack in Yerushalayim were held late Wednesday night and Thursday. Two terrorists, Issa Yassin Yussuf and Wanoun Mahmad Salah Hamad, both residents of the Yerushalayim neighborhood of Kalandiya, went on a stabbing spree, seriously injuring two Jews, one of whom later died. Police fired at the terrorists, killing one and injuring one, but sadly, a Jew was also hit by the police gunfire, and he later died from his wounds.

Killed in that attack were Rav Reuven Biermacher, Hy”d, 51, and Ofer Ben Ari, z”l, 46. Rav Biermacher died of stab wounds at the hands of the terrorists, who reportedly stabbed him 23 times. Ben Ari was killed by accidental fire as police sought to shoot down the terrorist.

Rav Biermacher, originally from Argentina, was a rebbi in Yeshivas Aish HaTorah’s Spanish program. He had spent the morning teaching, and was killed as he left the Old City, Rabbi Steve Burg, director general of Aish HaTorah, wrote in a message to the yeshivah posted on his social-media page.

The levayah for Rav Biermacher was held in his home town of Telshe Stone, with hundreds of residents, talmidim, and colleagues from the Torah world accompanying his bier. Among the maspidim was Harav Aryeh Shulman, mara d’asra of Telshe Stone; and the Rav of his community, Chanichei HaYeshivos, Harav Aryeh Leib Goldberg. “The last dvar Torah I heard from him was in a mussar discussion, in which he said that ‘a person leaves his house in the morning and can never be sure if he is returning home at night.’”

Rav Biermacher left behind seven children, the youngest three years of age. He was buried on Har Hamenuchos.

At the levayah for Ofer Ben-Ari at Har Hamenuchos in Yerushalayim on Thursday, family members, friends, and the Mayor of Yerushalayim, Nir Barkat, gathered to lay to rest a man who was called a hero by police. Ben-Ari, seeing the terrorist stabbing Rav Biermacher, attempted to wrestle them to the ground. He was killed by a stray bullet from a police officer who was attempting to neutralize the stabber. “Ofer’s decision to leave his car and to struggle with the terrorist was part of his personality,” said Barkat. “He was a man with a golden heart, with the heart of a lion.”

Doctors at Shaare Zedek hospital on Thursday said that the condition of a third  victim of Wednesday’s stabbing terror attack had shown marked improvement overnight Wednesday. The victim, said officials, had been taken off a respirator and was conscious. The public was asked to continue to daven for Mordechai Aharon ben Leah Miriam.