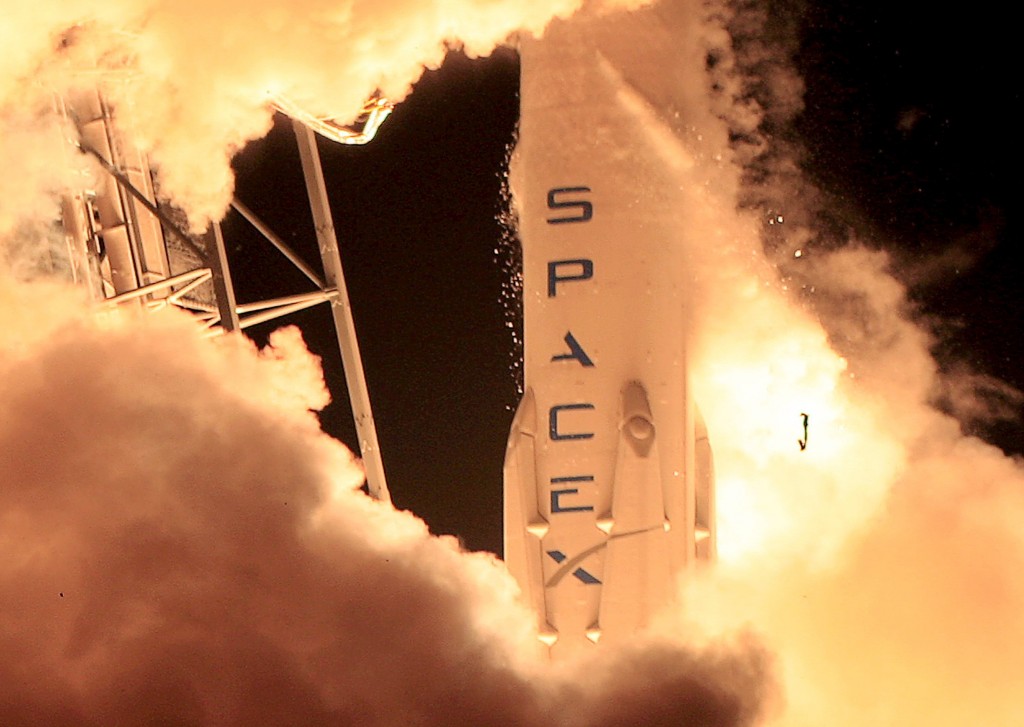 SpaceX’s Falcon 9 is back in service, blasting off Monday night after a six-month stand-down; and — just as remarkably for the company’s long-term plans — the rocket is back on the ground, in one piece.

The space company made its triumphant return to flight with a flawless 8:29 p.m. EST launch from Cape Canaveral Air Force Station into the moonlit Florida sky, intended to deliver a set of 11 private satellites to orbit. That was followed by a collective sigh of relief — because the last Falcon 9 was not successful, having blown up shortly after liftoff, June 28.

Then, 10 minutes after Monday’s launch, SpaceX turned the mission into a double triumph by doing what it had failed to do in three previous tries. It brought the first stage booster of the rocket safely back to Earth. That opens the company’s long-term strategy of reducing rocket launch costs eventually by being able to use recycled rockets.

A crowd of hundreds gathered at SpaceX’s watch party at Exploration Park in Cape Canaveral cheered wildly as they watched the rocket return atop a plume of engine blast, and then as SpaceX struck the landing pad without so much as a wobble.

There is one more sigh yet to come: the second-stage of the Falcon 9 must deploy the satellites into orbit, putting SpaceX back into business for paying customers.

His company did not create history with the landing. That was made four weeks ago when one of Musk’s competitors, Jeff Bezos’s Blue Origin, successfully sent one of its New Shepard rockets into space and brought it down for a perfect landing in the West Texas desert.

Yet Bezos’s rockets still are in the testing stage, years from being available for commercial or government space activity, while SpaceX has been carrying payloads into orbit for more than six years.

SpaceX had not done so successfully since April 27, when a Falcon 9 left Cape Canaveral to lift a private satellite into orbit.

After the June 28 disaster, which burned up a capsule full of equipment and supplies that was headed for the International Space Station, the company quickly determined that the accident was caused when a substandard support strut broke inside the booster. SpaceX replaced the struts and launched Monday’s rocket with full confidence that the problem was solved.

A successful mission puts SpaceX back into what has been a busy operation at Cape Canaveral. The company still has more than three dozen launches already booked there for coming years. That includes some that would launch from the company’s new launch complex that it has leased from NASA and renovated at Kennedy Space Center, next door to the Air Force station.

This was SpaceX’s first attempt to land a Falcon 9 booster on the ground, at a landing facility the company built this year on the leased site of another retired launch pad at Cape Canaveral A.F.S.

The company’s three previous attempts to bring back a Falcon 9 all aimed for a barge in the Atlantic Ocean. Two fell down and blew up. SpaceX steered the other to land in the water because the waves were too strong to attempt a barge landing.