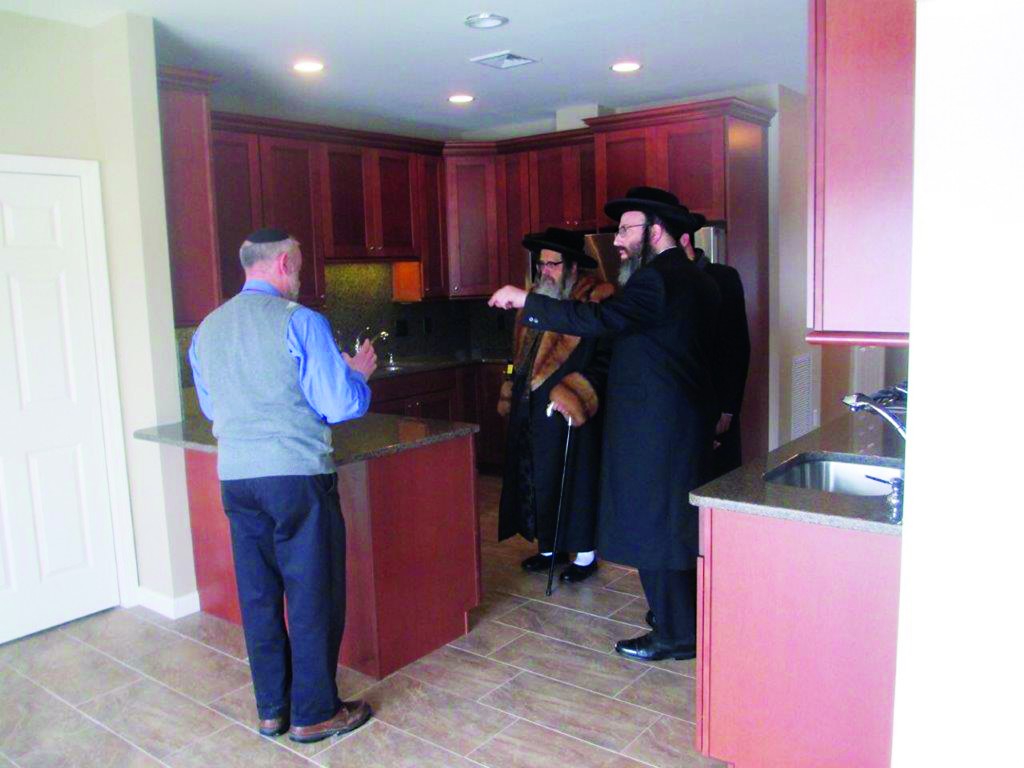 In an attempt to address the growing housing crisis that has affected countless young frum families in Brooklyn, the Satmar community under the leadership of its Rebbe, Harav Zalman Leib Teitelbaum, has announced two building projects they hope will be the beginning of a solution to this particularly challenging issue. Over Chanukah, a team of askanim made public plans for an expansive development in the town of Bloomingburg, in upstate New York. At the same time, a detailed booklet was widely circulated with options for new houses in a development currently under construction on the outskirts of Lakewood.

While the overwhelming demand and limited supply of housing has been long-bemoaned by Boro Park residents as well, in recent years its effects have been acutely felt in the Satmar center of Williamsburg.

“It’s a population explosion,” said Rabbi Hertz Frankel, the former English principal of Satmar’s Bais Rochel system and long-time spokesman on behalf of the community. “This year, Satmar’s alef-beis class opened with 20 parallels. There is a tremendous need for housing as well as more space for the mosdos themselves.”

Rabbi Frankel said that the crisis has reached such proportions that many young families have been living in basements for years. Others are living in what he called “tenement-like” conditions, with some even sharing kitchen facilities with other couples.

The number of apartments available in central Williamsburg near shopping and shuls has become increasingly limited for well over a decade. Clashes with the city over zoning narrowed the possibility of new housing starts. Some new projects have been approved, but in recent years the growing appeal of the Williamsburg area to non-Jews seeking a neighborhood in close proximity to Manhattan has driven the price of apartments far beyond the reach of most young families.

A few years ago, Satmar established a team of askanim to seek creative solutions to the crisis. Many possibilities were investigated; however, a series of impasses stymied progress for some time.

Several years ago the group began to eye the small town of Bloomingburg. Its many open spaces seemed to hold potential for expansion. Its close proximity to the Satmar community of Kiryas Joel, a 20-minute drive away, made the location seem ideal.

Slowly, families began to move into rental properties, establishing a shul and small kollel. The community now has approximately 40 families, but legal resistance from some in the small, rural town obstructed expansion and new construction.

Now, however, on the heels of court victories, developers have begun work on an entirely new series of spacious townhouses designed for the Satmar community, called Chestnut Ridge. Zoning permits have been secured for 400 units.

“There are 48 homes that are basically ready and we hope to build more and more over the coming years,” said Mayer Gross, one of Satmar’s key askanim. “The Rebbe has been deeply concerned about this problem for years. This is not enough [to solve] the problem, either, but Bloomingburg offers a lot.”

The small community that already exists operates a pre-school, while a bus takes older children to Kiryas Joel. Plans are in the works to build new buildings for Bloomingburg’s own shul, cheder, and girls’ school. The kehillah also plans to appoint Rabbanim and Dayanim for the new settlement. Askanim are working with businesses in nearby towns such as Middletown to offer employment opportunities.

Mr. Gross has also been heavily involved in efforts to establish a branch of Satmar in Lakewood.

“Lakewood is already used to building these types of developments, so getting approval is not a problem,” he said, adding that he hoped some units would be ready by this coming fall.

The set of 74 townhouses near Cross Street, known as Rockwell, are built with finished basements that will provide rental income for residents to help cover mortgage payments. Askanim plan to develop a system to pair homeowners with young couples to occupy the rental apartments, also a way of feeding further growth. The location also offers the possibility of further expansion.

While Lakewood is further from the main Satmar population centers of Williamsburg and Kiryas Joel, the launch should be aided by the well-established community already in existence, offering doctors, shopping, schools, transportation, and the like. As the community grows, askanim plan to build mosdos to accommodate the kehillah.

Chaim Yaakov Reisman, a member of the “housing crisis” team, said that plans for an asifah are in the works to showcase both new communities to Williamsburg families.

“These projects are going to help a yungerman who wants to be able to own a normal house for a normal price,” he said. “We are working hard so that people should have options. Right now there is simply nowhere else to go.”