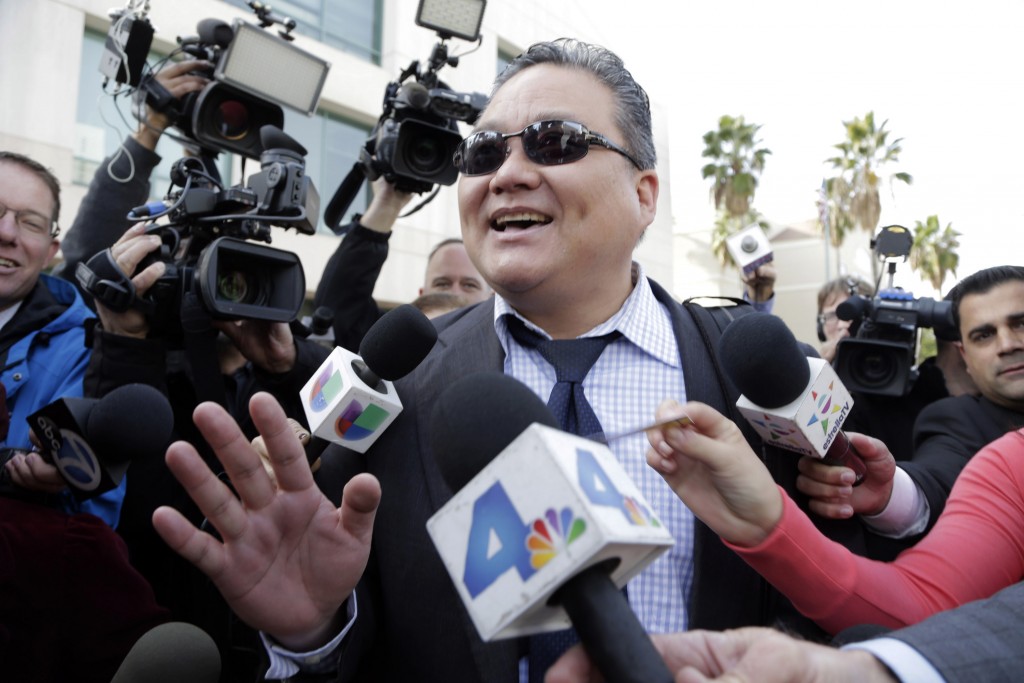 Enrique Marquez Jr., the man accused of purchasing weapons used by the couple who carried out this month’s deadly San Bernardino attack, will remain in custody as his criminal case proceeds, a U.S. magistrate judge ruled Monday.

U.S. District Magistrate Judge David Bristow found that Marquez continues to pose a public risk and therefore could not be freed as he awaits trial.

Bristow pointed to the most serious of the three charges facing Marquez: that he plotted with one of the shooters, Syed Rizwan Farook, to perform other attacks in 2011 and 2012 that the pair did not carry out.

“The grave harm that is presented to the community by that conduct was demonstrated on Dec. 2,” Bristow said, referring to the rampage by Farook and his wife, Tashfeen Malik, that left 14 people dead and 22 wounded. “The gravity of such conduct … is such that at this point of time the defendant has not rebutted the argument that he is a danger to the community and he continues to pose that danger.”

The decision was a defeat for Marquez and his federal public defender, Young Kim, who had tried to persuade Bristow that the 24-year-old would neither flee nor do any harm if allowed to go free.

Kim focused his arguments on the significant amount of time that had passed since Marquez is alleged to have conspired with Farook.

“Nothing has happened between then and now,” he told the judge.

He said the charge that Marquez conspired with Farook has “nothing to do” with the San Bernardino attack, which is “very fresh in everyone’s mind and emotions are very raw.”

Marquez, Kim said, has no criminal record or passport, adding that suggestions in court filings by federal officials that he suffers from mental health and substance abuse issues are untrue.

If Marquez was granted release, his mother and stepfather would put their house up as collateral to assure he would not flee, Kim said.

Assistant U.S. Attorney Christopher Grigg parried the claims, saying Marquez’s alleged past scheming with Farook could not be separated from this month’s mass shooting.

Grigg acknowledged that there was no evidence that Marquez participated in the attack at the Inland Regional Center where Farook’s coworkers at a county health agency were targeted. “Nonetheless,” he said, “the plotting was real, the arming of Mr. Farook happened and the San Bernardino shooting resulted.”

Along with the charge that he was part of previous terror plots, Marquez is accused of purchasing two semiautomatic rifles that he then unlawfully handed over to Farook. The couple went on to use the weapons in the massacre and in a wild shootout hours later with police in which they were both killed.

Marquez faces another charge stemming from allegations that he violated immigration laws by entering into a sham marriage with Farook’s sister-in-law, a Russian native, that allowed her to stay in the U.S.

Bristow said he did not believe Marquez was likely to flee if he were freed, but he sided squarely with Grigg in deciding that the seriousness of the allegations against Marquez and the danger he posed required him to remain behind bars.

A day after the bloodshed, Marquez called 911, according to a transcript included in court records.

“What’s wrong? Why do you feel like you want to kill yourself? What’s going on?” the operator asks.

“I don’t know. My neighbor. He did the San Bernardino shooting,” Marquez said. “They can trace all the guns back to me.”

Shortly afterward, Marquez was admitted to the emergency room at Harbor-UCLA Medical Center and referred to the psychiatric ward.

After being released from the hospital, Marquez voluntarily sat through days of interviews with FBI agents, waiving his right to an attorney each day, according to prosecutors. During the interviews, Marquez detailed earlier plans with Farook to carry out attacks at Riverside City College and along a stretch of the 91 Freeway.

At Monday’s hearing, Kim tried unsuccessfully to argue that Marquez’s cooperation with the FBI, during which he was not under arrest and voluntarily returned each day, was evidence that he was not a risk to go on the lam or hurt anyone.

Marquez, a former neighbor who bonded with Farook over a mutual interest in repairing cars, shuffled into the courtroom in Riverside shackled at the ankles and wrists.

Apart from huddling quietly with his attorneys, Marquez said nothing until the very end of the proceeding when the judge asked him if he had any questions. Marquez uttered a barely audible “No.”

His next court appearance is scheduled for Jan. 4.