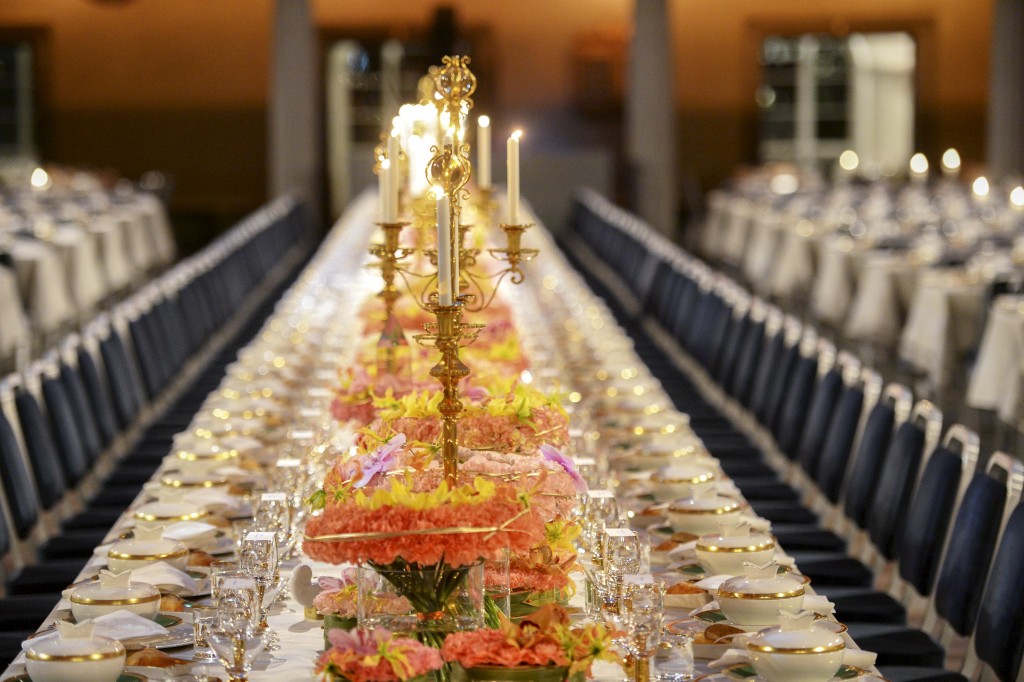 This year’s Nobel Peace Prize winners, the Tunisian National Dialogue Quartet, collected their award in Norway on Thursday, appealing for international cooperation to make the global fight against terrorism a top priority.

Speaking at the awards ceremony in Oslo City Hall, Tunisian labor union leader Houcine Abassi expressed the group’s sorrow and anger at recent terrorist acts that killed and injured hundreds. This year, two major assaults on tourists in Tunisia killed 22 people at the Bardo Museum in the capital, Tunis, and 38 at a resort near Sousse.

He said the quartet’s “feeling of euphoria and pride does not obscure the grief, sorrow and anger” they feel about recent violent events, including “Sousse, the Bardo Museum, Beirut, Paris, Sharm el-Sheikh and Bamako [with] scenes of barbaric and heinous terrorist acts.”

Abassi said the world was “most in need to make the fight against terrorism an absolute priority, which means perseverance on the coordination and cooperation between all nations.”

He was one of the four members of organizations, representing unions, industry, trade and human rights in Tunisia, which helped build democracy in the violence-torn country after the 2011 revolution.

The others who were in the Norwegian capital to fetch the award were Mohammed Fadhel Mafoudh, head of the bar association; Abdessatar Ben Moussa, president of the human rights group and Wided Bouchamaoui, the head of the employers’ association.

Norwegian Nobel Committee Chairwoman Kaci Kullmann Five cited the group for “its decisive contribution to the building of a pluralistic democracy” following Tunisia’s 2011 revolution that overthrew its longtime authoritarian president.

Addressing the audience of 1,000 people, including royalty, government members and foreign dignitaries, Kullmann Five described as “dramatic” the narrative behind this year’s peace prize.

“It speaks to the core of Alfred Nobel’s will and Nobel’s vision of fraternity, disarmament and peace-building forums,” she said. “Against a backdrop of unrest and war … [their] resolute intervention helped to halt the spiraling violence and put developments on a peaceful track,” after the summer of 2013 when Tunisia was on the brink of civil war.

She said the 8 million Swedish kronor ($960,000) prize was for the quartet as a whole, not for the four individual organizations. It is made up of: the Tunisian General Labor Union; the Tunisian Confederation of Industry, Trade and Handicrafts; the Tunisian Human Rights League; and the Tunisian Order of Lawyers, the country’s bar association.

The peace prize was the first Nobel award presented at ceremonies always held on Dec. 10, the anniversary of prize founder Alfred Nobel’s death in 1896.

The other prizes – in medicine, physics, chemistry, literature and economics – were handed to laureates in the Swedish capital, Stockholm, by Swedish King Carl XVI Gustaf.

The medicine prize, for helping discover drugs against malaria and other tropical diseases, was shared by Tu Youyou, the first-ever Chinese medicine laureate, with the other half going to Japanese microbiologist Satoshi Omura and William Campbell, an Irish-born U.S. scientist.

The physics award, for contributions to experiments showing that neutrinos change identities, was given to Takaaki Kajita of Japan and Arthur McDonald of Canada.

This year’s Nobel literature prize went to Belarusian journalist Svetlana Alexievich for chronicling the great tragedies of the Soviet Union and its successor states.

The Nobel Memorial Prize in economic sciences, not in Nobel’s will, was awarded to Scottish-born Angus Deaton, with dual U.S. and British citizenship, “for his analysis of consumption, poverty, and welfare.” The prize was established in 1968 by Sweden’s central bank.

The Nobel day was set to end with a traditional torchlight parade in Oslo, followed by lavish banquets there and in Stockholm.

Police in the two countries had increased the already tight security surrounding the events since the Paris attacks.

Last year, when prize winners Malala Yousafzai and Kailash Satyarthi were receiving their award, a Mexican student without an official invitation, ran onto the stage waving his country’s flag, which he had smuggled into the heavily guarded ceremony. He was quickly whisked away by a guard. The intruder was later deported after being denied political asylum.