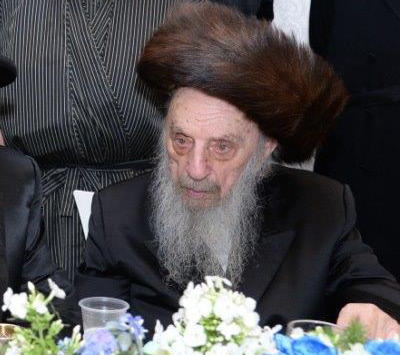 Harav Moshe Weiss, z”l, a distinguished Sanz-Klausenburger chassid and close confidant of many Gedolei Yisrael, especially the Sanz-Klausenburger Rebbe, zt”l, who was also his mechutan, was niftar on Wednesday morning in Yerushalayim.

Rav Weiss was born in Selish, Hungary. In his youth, he was a talmid of the Rebbes of Selish and Spinka, zt”l. He also learned in Munkacs before the Holocaust.

During the Holocaust he faithfully served the Klausenburger Rebbe, under impossible circumstances, helping to infuse a breath of hope into all those around them, despite the despair that was so prevalent. After the War he helped the Rebbe bury many of the Kedoshim, Hy”d, and the Rebbe promised him that, in this merit, he would be zocheh to sons who were talmidei chachamim. Harav Weiss emerged as a talmid chacham in his own right and the Rebbe’s brachah was also fulfilled.

Later, in Eretz Yisrael, Harav Weiss helped the Rebbe to establish the Sanz-Klausenberg mosdos. Eventually he became a mechutan of the Rebbe when his son Harav Dov married the Rebbe’s daughter.

Harav Weiss was also close with the Lev Simchah of Ger, the Nesivos Shalom of Slonim, and the Yeshuos Moshe of Vizhnitz, zecher tzaddikim livrachah. He was also a mechutan with ybl”c the Biale Rebbe, shlita, of Yerushalayim.

The levayah was to be held Wednesday afternoon, with kevurah on Har Hamenuchos in Yerushalayim.