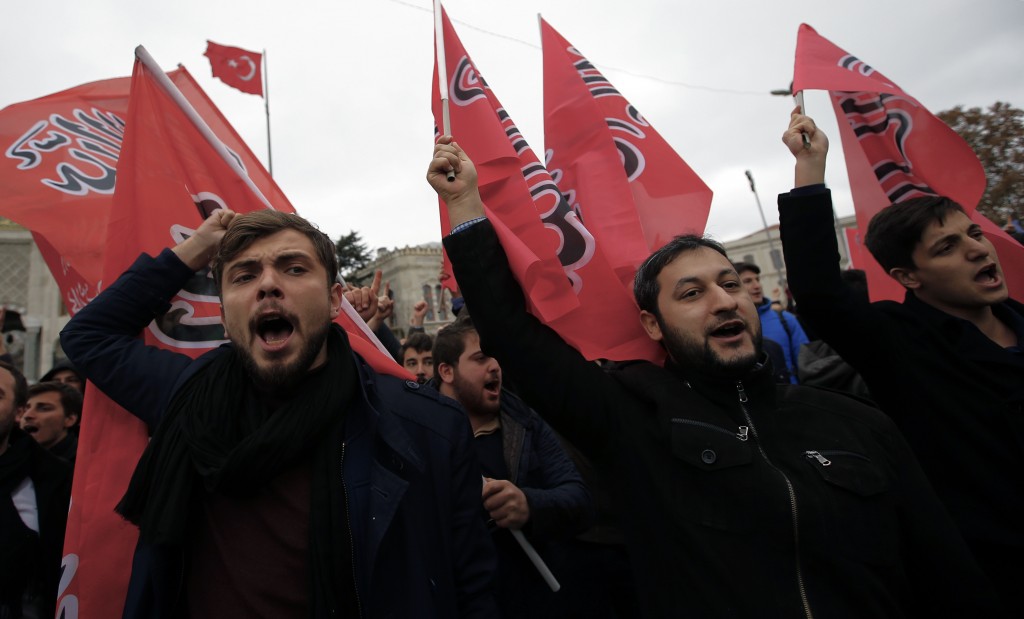 Russia has unleashed another barrage of airstrikes on Syria, including the first combat launch of a new cruise missile from a Russian submarine in the Mediterranean Sea, the country’s defense minister said Tuesday.

The Kalibr cruise missiles launched by the Rostov-on-Don submarine successfully hit the designated targets in Raqqa, Defense Minister Sergei Shoigu reported to President Vladimir Putin. The submarine was in a submerged position during the launch, he added.

Putin noted that the new cruise missile can be equipped with both conventional and nuclear warheads, adding that he hopes that the latter “will never be needed.”

Shoigu said the Russian military had informed Israel and the United States about the airstrikes before launching them. A U.S. defense official, speaking on condition of anonymity because he wasn’t authorized to discuss the matter publicly, confirmed that Russia notified the U.S. in advance.

The U.S. official said at least 10 cruise missiles were launched from Russian surface ships in the Caspian Sea and at least one missile was fired by a Russian submarine in the eastern Mediterranean.

Shoigu also told Putin that Syrian army forces had overtaken the area near the border with Turkey where a Turkish jet shot down a Russian warplane on Nov 24. He showed Putin the plane’s flight recorder, which he said Syrian and Russian troops had recovered from the crash site.

Putin ordered the flight recorder to be studied in the presence of foreign experts, adding that the data will show the plane’s flight path.

Moscow’s relations with Ankara have been badly strained over the downing. Turkey said it shot down the aircraft after it violated Turkey’s airspace for 17 seconds despite repeated warnings.

Russia has insisted the warplane had stayed in Syria’s airspace, and responded by deploying long-range air defense missiles at its air base in Syria and introducing a slew of economic sanctions against Turkey.

Russian Foreign Ministry spokeswoman Maria Zakharova dismissed Turkey’s complaint about a sailor on a Russian navy vessel pictured on its deck with a portable air-defense missile while the ship was cruising across the Bosporus.

Turkey denounced the incident as a provocation and summoned the Russian ambassador to protest.

Zakharova responded Tuesday by saying the Russian crew had the right to protect its vessel and insisted that the action didn’t contradict the Montreux Convention, which sets international rules for using the Turkish straits.

Russia’s Foreign Ministry also voiced concern Tuesday about the reported bombing of a Syrian army camp without addressing the U.S. claim that Russia was responsible for the bombing.

The Syrian government blamed aircraft from the U.S.-led coalition for targeting the army camp in the eastern city of Deir el-Zour on Sunday night, killing three Syrian soldiers and wounding 13. The U.S. denied the claim, and a senior U.S. military official said Washington was “certain” it was a Russian airstrike that had hit the camp. The official spoke on condition of anonymity because he wasn’t authorized to discuss the issue publicly.

Without commenting on the U.S. claim, Russia’s Foreign Ministry on Tuesday said it has “serious concerns” about reports of the coalition strike in Deir el-Zour. It said the incident was rooted in the U.S.-led coalition’s reluctance to coordinate with Damascus on its campaign against the Islamic State terror group.

“These incidents show that the situation on the front against IS in Syria and Iraq is getting more tense,” the ministry said, adding that the Turkish military’s deployment to a base near Mosul in Iraq without Iraqi government sanction has added to the tensions.

“We consider such presence unacceptable,” the ministry said.

Dmitri Trenin, director of the Carnegie Moscow Center, said the arsenal Russia has put on the ground in Syria signals Moscow’s intention to have a lasting military presence. He added that while Russia has said ‘no’ so far to Iraq’s request for help in fighting IS, that attitude may change.