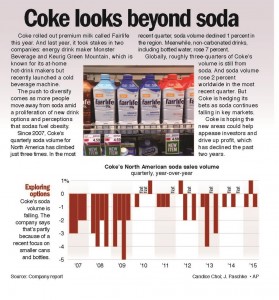 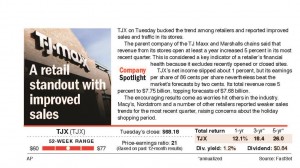 U.S. stocks ended little-changed on Tuesday after a late-afternoon slump wiped out much of the market’s gains from earlier in the day.

Investors weighed mixed results from Wal-Mart stores, Home Depot and other big U.S. retailers, as well as new data on inflation. Energy stocks were among the biggest decliners as oil prices closed lower.

“You saw oil prices come down, and the market has been following oil prices,” said Quincy Krosby, market strategist at Prudential Financial. “The market moved up handsomely yesterday, so we’re not losing all of the gains.”

Major stock indexes wavered for much of the morning as investors sorted through the latest company earnings and a batch of economic reports. Traders pushed stocks higher by midday and for much of the afternoon until the final hour of trading, when the rally evaporated.

Investors, who have been worried that sales could be weak in the end-of-year shopping season, sold retailers that reported disappointing quarterly results.

Wal-Mart Stores rose 3.5 percent after the company reported improved customer traffic and an increase in a key sales figure for the third quarter, even as a stronger dollar pressured its performance overseas. The world’s largest retailer also issued a forecast for the end-of-year shopping season that largely beat Wall Street expectations. The stock added $2.05 to $59.92.

Traders also had their eye on economic reports. The Labor Department reported that the consumer price index rose 0.2 percent in October after falling the prior two months.

The small uptick in inflation could increase the likelihood that the Federal Reserve will begin raising short-term interest rates from historic lows as early as next month, said David Chalupnik, head of equities at Nuveen Asset Management.

“Historically, hiking interest rates would not be good for the stock market, but at this point it’s a psychological boost that the economy is self-sustaining enough that the Fed could get off the zero interest rate policy,” Chalupnik said.

The energy sector shed 1.2 percent, extending its losses this year to 15.9 percent. The sector — the S&P 500 index’s biggest decliner for the year — has been hurt by the protracted slide in oil prices.