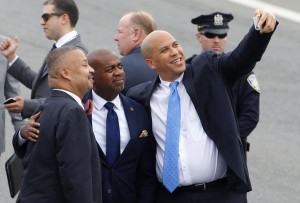 Gov. Chris Christie on Monday accused President Barack Obama of trying to take credit for criminal justice reforms that Christie put into place, as the Republican presidential contender tried to seize some of the president’s limelight during a visit to the state.

Christie traveled to Camden on Monday to tout crime reductions the same day the president was appearing in Newark to promote programs that help former inmates after they’ve been released from prison. It was the second time the president has traveled to New Jersey to tout criminal justice reforms in recent months.

“I think it’s wonderful for the president to come to New Jersey and acknowledge the work that’s been done in New Jersey by leaders of New Jersey,” Christie told reporters after an appearance at Camden County Police Headquarters, where he touted Camden’s crime reduction following an overhaul of the city’s police department and a new focus on community policing.

The city has long been among the most crime-ridden in the country, and the problems worsened in 2011 and 2012 after Christie cut state aid. In 2013, the city disbanded its police force, replacing it with a county-run department no longer bound by union contracts.

“I think for the president to come and you know try to take a victory lap here is beneath him. But it’s his call,” said Christie, who said the president’s visits undermine Democrats’ frequent assertions that the state is poorly run.

“I just think it’s really interesting that we have so many people from the Democratic Party and from the press, the editorial press, who say things are so bad here in New Jersey. Yet their president, the Democratic president, continues to come back here on things that are purely created by the state and local partnership to salute them,” he said. “So I think that’s kind of funny, you know, ironic, and just shows them to be hypocrites. Because if things were so bad here, what are you doing here?”

Christie’s critiques, which were echoed in a series of morning interviews, drew a stern rebuke from White House spokesman Josh Earnest.

“They’re not surprising for somebody whose poll numbers are close to an asterisk,” Earnest said.

This article appeared in print on page 4 of the November 3rd, 2015 edition of Hamodia.