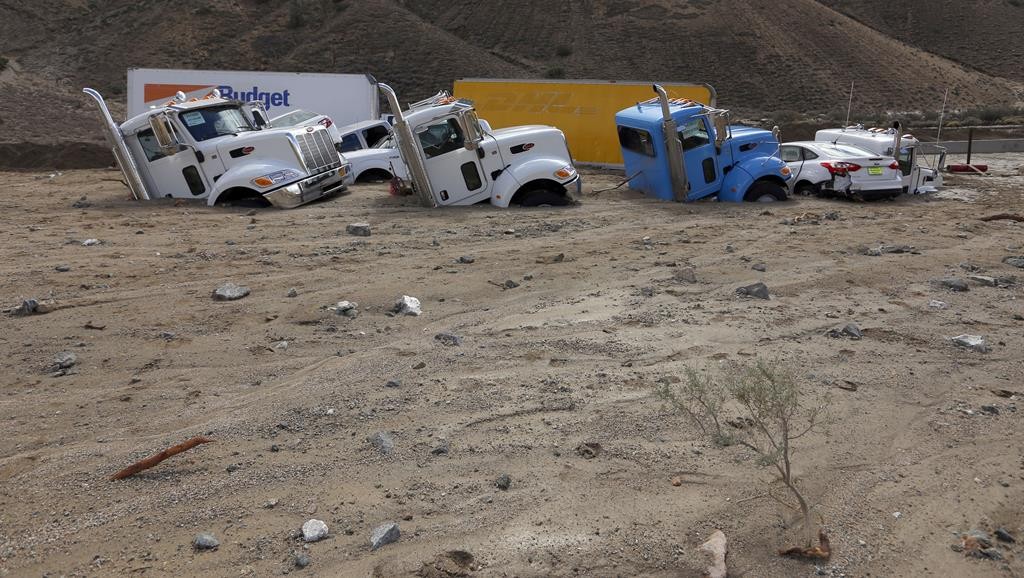 Crews digging vehicles out from under tons of mud that clogged Southern California roadways during flash flooding three days ago were dealing with another round of rain on Sunday.

A drizzle blanketed the region, but forecasters said there’s little chance of thunderstorms like those that unleashed debris flows Thursday, damaging dozens of homes and trapping hundreds of cars on highways and roads.

“When it started raining again, we all held our breath,” said California Highway Patrol Officer Justin Foraker. “But luckily the rain has been light so far.”

At least 30 vehicles remained stuck in now-hardened mud along State Route 58 in Kern County, according to the California Department of Transportation. Officials hope to have the mess cleared and the lanes reopened by Thursday at the latest.

“We’re being conservative. We hope to reopen even earlier, but a lot of work remains,” said Caltrans spokeswoman Florene Trainor.

Geologists were checking the stability of nearby hillsides and workers were clearing culverts and drainage pipes, she said.

More than 100 cars, buses, RVs and semi-trucks were trapped on State Route 58 in last week’s flooding. There were no reports of injuries.

Hundreds of cars also were stuck on Interstate 5, a major artery, but those vehicles were cleared and the freeway reopened by late Friday.

Homeowners in northern Los Angeles County communities were spending their weekend digging mud out of their houses.

Kerjon Lee, a spokesman for Los Angeles County Public Works, said Saturday that more than 30 pieces of heavy equipment were on the ground in the small mountain communities of Elizabeth Lake and Lake Hughes in Leona Valley, about 40 miles north of Los Angeles.

He said in that area alone, crews need to clear out 20,000 dump trucks worth of dirt, which could take months. The dirt eventually will be used to backfill eroded canyons.