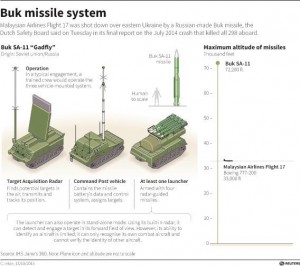 All 298 people aboard probably died almost instantly, the Dutch Safety Board said, in a finding likely to comfort victims’ relatives, who feared that some of their loved ones might have been conscious as they plummeted tens of thousands of feet to their deaths. The crash report blamed Ukraine’s government for failing to close the airspace above the eastern part of the country while an armed conflict was underway in the area.

Still, Moscow swiftly went into spin mode to try to deflect blame from Russian-backed rebels in eastern Ukraine who many in the West say were clearly responsible for the July 17, 2014, disaster. Hours before the Dutch report was released Tuesday afternoon, a state-controlled missile-maker in Russia said its own investigation showed that damage patterns to the downed plane could not have been made by weapons currently found in Moscow’s arsenal and that the missile was fired from an area under the control of Ukrainian government forces, not the separatists.

Both the Russian and Ukrainian militaries have Buk missiles, but the Almaz-Antey arms-maker said the kind of missile implicated in the attack on MH17 was an older model that Russia no longer uses.

Tjibbe Joustra, chairman of the Dutch Safety Board, presented the Dutch-led investigation’s findings at a news conference at Gilze-Rijen Air Force Base in the Netherlands, where a partial reconstruction of the front of the downed airliner, pieced together from wreckage recovered from the crash site, was dramatically unveiled.

Joustra said the missile detonated within about 3 feet of the cockpit, just above and to the left of the nose of the Boeing 777. Microphones around the cockpit picked up a “sound peak” in the last milliseconds before the recordings went silent, which allowed analysts to determine where the explosion occurred.

Bits of cubic and bow-tie-shaped shrapnel penetrated the plane and were found embedded in the bodies of the three crew members in the cockpit, who were killed instantly, Joustra said. The plane broke apart in the air, with the tail falling to earth first and then the central section with the engines, which landed upside down and caught fire.

“Flight MH17 did not crash as a result of meteor strikes. We have excluded the possibility of the airplane itself having any technical defect or that of a bomb exploding inside the aircraft,” Joustra said.

“Nor did Flight MH17 crash as the result of an air-to-air attack,” he added, dismissing a scenario put forward by Russian critics alleging that the plane was shot down by a Ukrainian fighter jet. The damage pattern would have been different, and radar would have picked up the presence of another aircraft, Joustra said.

The Dutch-led investigation team included members from Russia, Ukraine, the United States and three other countries. All of them endorsed the finding that a missile brought down the airliner, but the Russian investigators dissented from the conclusion that it was a Buk, Joustra said.

Investigators criticized the Ukrainian government for not recognizing the threat posed to civil aircraft in the skies over eastern Ukraine as forces loyal to Kiev fought Russian-backed separatists on the ground.

Between July 14 and July 17 of last year, 61 operators from 32 countries flew above the contested territory, Joustra noted. There were 160 flights over the area on the day of the crash itself, and three other planes were close by when MH17, which was en route to Kuala Lumpur from Amsterdam, went down.

“Almost all operators were flying over that area, and why? Because nobody thought that civil aviation was at risk,” Joustra said.

But, he said, “there was sufficient reason to close the airspace above the eastern part of Ukraine as a precaution. The Ukraine authorities failed to do so.”

Dutch Prime Minister Mark Rutte said that the report, 15 months in the making, had given “a lot of clarity” as to the cause of the disaster and that it had confirmed “some of our most shocking suspicions.”

He said his Cabinet would take up some of the recommendations of the report, including better international coordination over passenger lists.