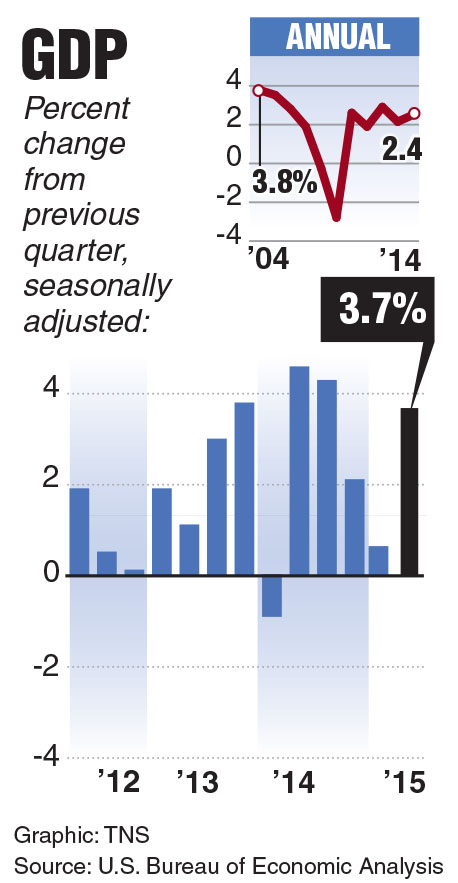 The U.S. economy grew at a brisk pace during the spring quarter, an encouraging sign that economic momentum was building before the turmoil in financial markets.

The nation’s output of goods and services expanded at a 3.7 percent annual rate in the second quarter, much faster than the 2.3 percent rate initially estimated last month by the Commerce Department.

An upward revision had been expected, but Thursday’s report on the nation’s gross domestic product was even better than what most economists had anticipated.

The second quarter marked a solid acceleration from the weak economic activity in the first three months of this year, when the severe winter weather and other special factors slowed GDP growth to just 0.6 percent at an annual rate.

Some of the pickup in the second quarter came from a bigger buildup of inventories, which could take a little bite out of the current quarter’s GDP as companies draw down their merchandise. But there have been some positive indicators in the third quarter as well, including gains last month in orders for durable goods.

Despite China’s slowdown, which has triggered turbulence in financial markets and further declines in commodity prices, readings thus far show U.S. consumer confidence holding up. Home building, which had been lackluster during most of the recovery, also is improving.

Consumer spending, which accounts for about two-thirds of U.S. economic output, was the biggest driver of growth in the second quarter, contributing 2.1 percentage points of the 3.7 percent gain in GDP. This was nearly double the first quarter.

Real disposable income — that is, income after taxes and adjusted for inflation — increased by just 1.3 percent in the second quarter, only a third of the growth in the prior quarter. Consumer spending, however, should benefit from lower oil prices and the steady gains in jobs.

The stronger-than-expected second quarter bodes well for the current quarter, which analysts see as growing at an annual rate of around 2.5 percent — slightly faster than the pace of the recovery, which is now in its seventh year.

“The economy regained a massive amount of momentum in the second quarter,” said Paul Ashworth of Capital Economics. “All the evidence from July’s activity and employment data suggests that momentum continued into the third quarter.”