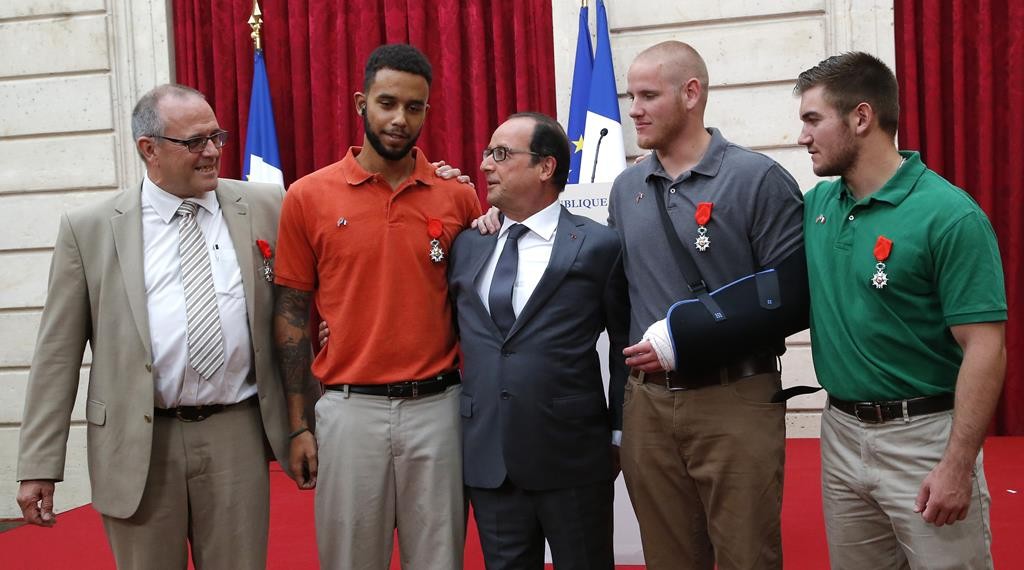 Three Americans and a Briton who tackled an attacker loaded with guns and ammunition prevented carnage on the high-speed train carrying 500 passengers to Paris, France’s president said Monday as he presented the men with the Legion of Honor and praised them as an example of the need for action when faced with terrorism.

President Francois Hollande said the two Americans who first tackled the gunman were soldiers, “but on Friday you were simply passengers. You behaved as soldiers but also as responsible men.”

Hollande then pinned the Legion of Honor medal on U.S. Airman Spencer Stone, National Guardsman Alek Skarlatos, and their longtime friend Anthony Sadler, who subdued the gunman as he moved through the train with an assault rifle strapped to his bare chest. British businessman Chris Norman, who also jumped into the fray, also received the medal.

The men showed “that faced with terror, we have the power to resist. You also gave a lesson in courage, in will, and thus in hope,” Hollande said.

His arm in a sling and his eye bruised, Stone, 23, has said he was coming out of a deep sleep when the gunman appeared.

Skarlatos, a 22-year-old National Guardsman recently back from Afghanistan, “just hit me on the shoulder and said ‘Let’s go.’”

With those words, Hollande said, a “veritable carnage” was avoided.

The attacker, identified as 26-year-old Moroccan Ayoub El-Khazzani, is being detained and questioned by French counterterrorism police outside Paris.