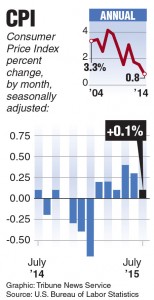 Consumer prices ticked up in July, the sixth-straight monthly increase, but the pace of growth slowed in what could be a worrisome sign for Federal Reserve officials as they consider hiking a key interest rate.

The consumer price index increased 0.1 percent in July, down from a 0.3 percent rise the previous month, the Labor Department said Wednesday.

Growth in food and energy prices, which had driven the June increase, eased last month. Excluding those often-volatile elements, so-called core prices also were up just 0.1 percent in July.

Analysts had expected consumer prices and the core index to rise 0.2 percent.

Ian Shepherdson, chief economist at Pantheon Macroeconomics, said the drop in airfares probably would only be temporary. He noted that core inflation continues to trend slowly higher.

For the 12 months ended July 31, consumer prices increased 0.2 percent. Although the growth was small, it was up from the annual rate of 0.1 percent in June and the third-straight monthly increase.

Core prices were up 1.8 percent for the 12 months ended July 31, the same as the previous month.

Fed policymakers are watching inflation closely as they decide when to raise their benchmark short-term interest rate for the first time since 2006.

Though job growth has been solid in recent months, inflation has been running well below the central bank’s target of 2 percent.

But the consumer price index also is an important indicator of inflation.

August data is to be released on Sept. 16, as Fed officials gather for a two-day policy meeting during which many analysts expect them to raise the federal funds rate. The rate has been near zero since late 2008.

Narayana Kocherlakota, president of the Federal Reserve Bank of Minneapolis, said Thursday that it would be a mistake to raise the interest rate anytime soon.

A higher interest rate could damage the economic recovery and is not needed with inflation running so low, he said in an opinion article in The Wall Street Journal.

“The U.S. inflation outlook … provides no justification for policy tightening at this juncture,” said Kocherlakota, who believes inflation concerns should be secondary to promoting job growth.