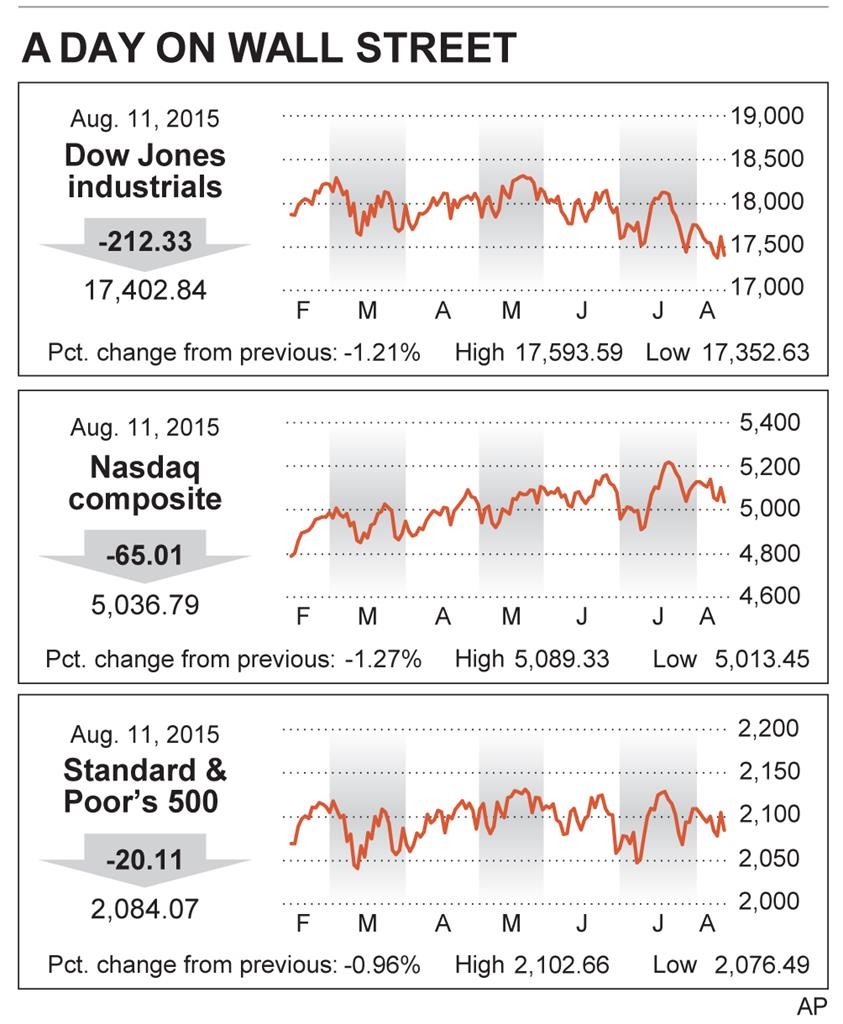 A move by China’s government to devalue its currency set off a sharp sell-off in global financial markets Tuesday as investors worried about the health of the world’s second-largest economy.
China’s government said the move to weaken the yuan was a result of reforms intended to make its exchange rate more market-oriented. However, most investors interpreted the action as an attempt by authorities to stimulate a slowing economy. A cheaper yuan will benefit China’s exports by making them less expensive overseas.
The move triggered a wave of selling. Oil, copper and other commodity prices fell as traders anticipated weaker demand from China. That led to big drops energy and materials stocks. Companies that derive a large part of their sales from China, like Apple and Yum Brands, also fell sharply.
“China is the second-largest economy in the world, and they are certainly going through a stage right now where growth is not as robust as it has been,” said Michael Scanlon, a managing director at John Hancock Asset Management. “China is one of the biggest risks to the equity market as a whole.”
The Standard & Poor’s 500 index fell 20.11 points, or 1 percent, to 2,084.07. The Dow Jones industrial average lost 212.33 points, or 1.2 percent, to 17,402.84. The Nasdaq composite index fell 65.01 points, or 1.3 percent, to 5,036.79
The Chinese government allowed the yuan to fall 1.9 percent, the biggest one-day drop in a decade. In recent months, the yuan has strengthened along with the U.S. dollar, hurting Chinese exporters. China’s exports fell by an unexpectedly large 8.3 percent in July. The yuan was valued at 6.32 per dollar on Tuesday, compared with 6.21 per dollar a day earlier.
Yum Brands, the owner of the KFC and Taco Bell chains, was among the biggest decliners in the S&P 500. The fast-food company gets more than half of its sales from China. The company said last month that it was expecting a strong second-half of the year in China. Yum fell $4.28, or 4.9 percent, to $83.54.
Apple, another company that makes a lot of money in China, dropped $6.23, or 5.2 percent, to $113.49 and Wynn Resorts, which generates more than half of its revenue from the Chinese gambling hub of Macau, slipped $2.39, or 4.3 percent, to $54.36.
The price of oil had another big drop, closing at its lowest level in six years. Oil prices also fell after OPEC said its production increased to a 3-year high, adding further evidence of a global supply glut. U.S. crude fell $1.88 to settle at $43.08 a barrel in New York, its lowest close since March of 2009. Brent crude, a benchmark for international oils used by many U.S. refineries, fell $1.23 to close at $49.18 in London.
The losses for stocks on Tuesday wiped out a large part of the gains from a day earlier, when the market logged its largest advance in three months as the price of oil logged a big gain and some corporate deal news boosted investor sentiment.
Investors shouldn’t be too worried by the big moves in market prices, said David Kelly, chief Global Strategist at JPMorgan Funds, because the moves were likely being exacerbated by low trading activity during the summer months.
“It’s another sign of softness in the global economy and that’s what is hurting the market today,” Kelly said. “But I wouldn’t make too much of the violent reaction because it’s a rather thin market to say the least.”
Google was one of the biggest gainers in the S&P 500 on Tuesday.
The tech giant gained after it announced a new structure for the company that included separating its lucrative internet business from some of its more speculative research projects. Investors welcomed the increase in transparency that will give them a better idea of how the technology giant spends its cash. Google’s stock gained $27.16, or 4.1 percent, to $690.30.
Bond prices rose sharply as investors snapped up safer assets. The yield on the 10-year Treasury note, which moves in the opposite direction to its price, fell to 2.14 percent from 2.23 percent on Monday.
The dollar rose to 125.18 yen from 124.82 yen Monday. The euro rose to $1.1047 from $1.1021.
European markets were mostly lower. France’s CAC-40 fell 1.9 percent, and Germany’s DAX lost 2.7 percent. Britain’s FTSE 100 shed 1.1 percent.
Gold climbed $3.60 to $1,107.70 an ounce and silver was little changed at $15.28 an ounce. Copper dropped 6.9 cents to $2.33 per pound.