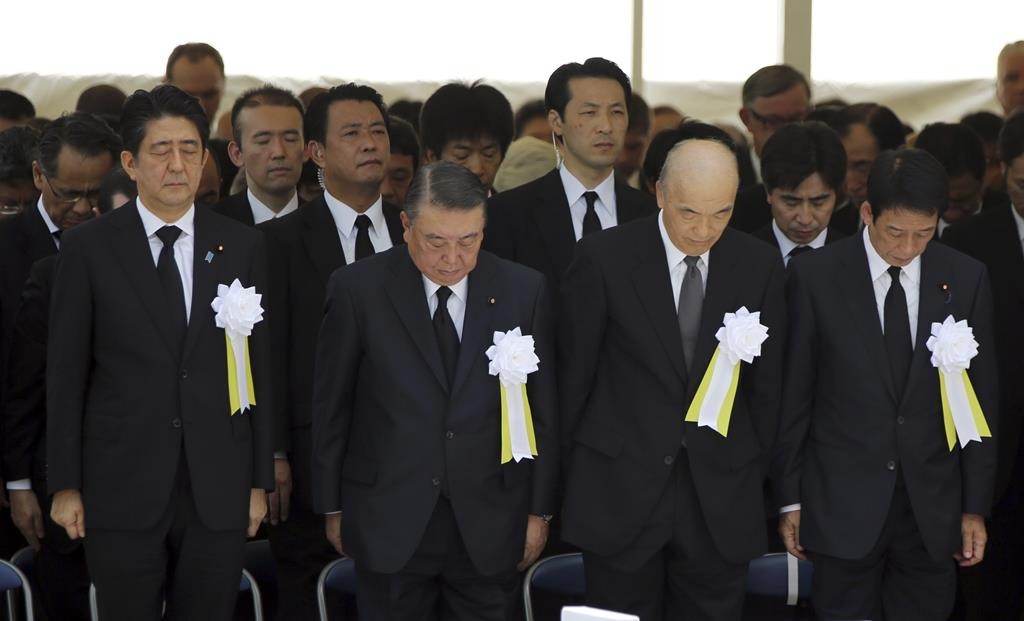 The city of Nagasaki marked the 70th anniversary of the atomic bombing Sunday with calls to abolish nuclear weapons and halt the Japanese government’s push to loosen restrictions on what its military can do.

With Prime Minister Shinzo Abe in the audience, a representative of Nagasaki bomb survivors told an annual ceremony that security legislation introduced by Abe’s government goes against the wishes of the survivors and “will lead to war.”

Representatives from 75 countries, including U.S. Ambassador Caroline Kennedy, were among those gathered under a tall white canopy to shade them from the sun on a very hot morning at Nagasaki Peace Park.

As a bell tolled, they observed a minute of silence at 11:02 a.m., the time when a U.S. B-29 plane dropped the atomic bomb, killing more than 70,000 people and helping to prompt Japan’s World War II surrender. The first atomic bomb in Hiroshima three days earlier killed an estimated 140,000.

Abe’s security bills, which he says are needed to increase Japan’s deterrence capabilities in the face of growing threats in the region, have run into stiff public opposition. The legislation would ease constitutional limits that restrict the military to self-defense, allowing Japanese forces to defend allies in limited circumstances.

Nagasaki Mayor Tomihisa Taue, addressing the same ceremony, noted the “widespread unease” about the legislation, which has passed the lower house of parliament and is now before the upper house.

Abe, in brief remarks, said that Japan, as the only country to experience nuclear attacks, would seek to play a leading role in realizing a world without such weapons.