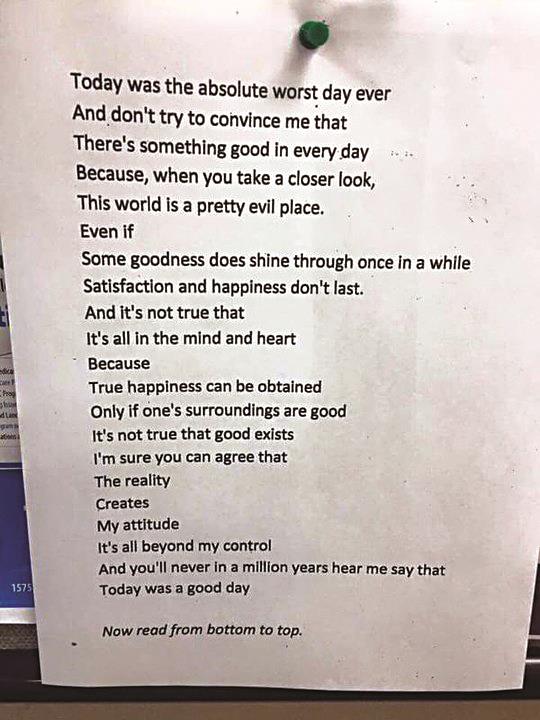 An inspirational poem written by a 16-year-old Crown Heights girl inspired people around the world last week, with major global newspapers sharing her message of hope written for a school project.

The poem penned by Chanie Gorkin of Beth Rivkah High School — titled “Worst Day Ever?” — earned her an A in school, then won a contest by Poetry Nation. From there it was printed and posted on a board in a North London hall when someone took a picture and tweeted it. That attracted attention from media outlets on both sides of the Atlantic, including Mashable, The Huffington Post, ABC, NBC and The London Telegraph.

“The coverage has been overwhelming,” says Gorkin’s mother, Dena, noting that her daughter was not one looking for such attention. “But she is happy to have inspired so many people.”

Gorkin, an 11th-grader at the Lubavitcher school, wanted to write something “inspired by Chassidic philosophy, which teaches about harnessing the power of [the intellect governing over emotion] and finding the good hidden in every moment,” her mother said.

So she flipped the high school assignment on its head, literally, writing a poem that could be read forward, but its true message revealed only when read backward.

Gorkin always kept the poem anonymous until it was published in April 2015 by the N’shei Chabad Newsletter. The magazine insisted it needed to use her name, and finally the teen agreed.

The sociable and studious Chanie Gorkin said, “I’m really happy that my poem has inspired people. If someone was having a terrible day and this helped them turn it around, then it has all been worth it.”