Community Jonathan Pollard to Be Released on November 20
Community 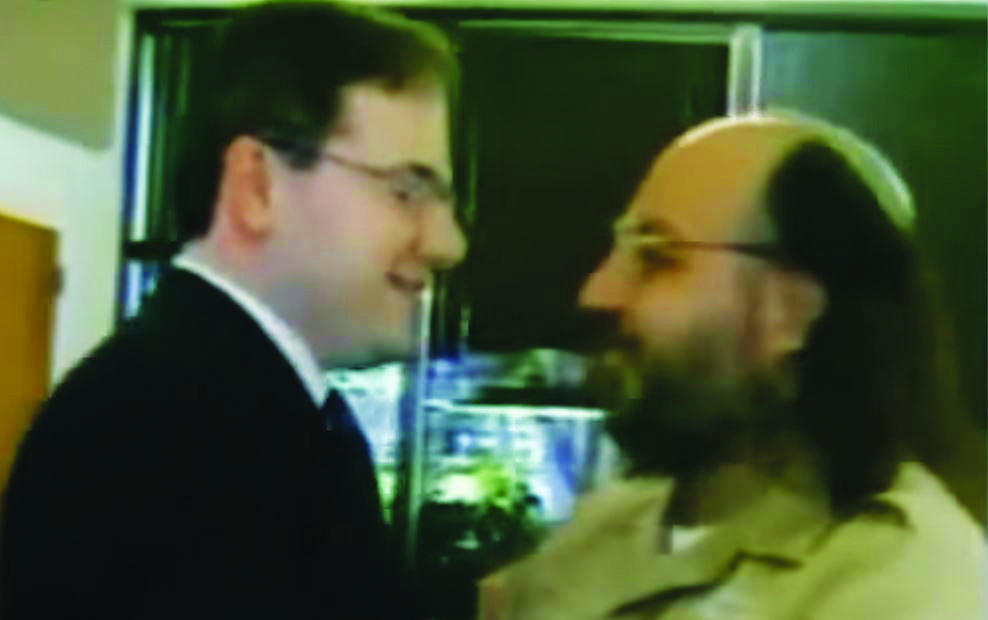 Klal Yisrael gave a deep sigh of relief on Tuesday when, after a long and agonizing wait, the U.S. Parole Commission finally issued a Notice of Action on Tuesday granting parole to Jonathan Pollard.

Mr. Pollard is scheduled to be paroled on November 21, 2015, 30 years after being arrested and receiving the unprecedented and unparalleled sentence of life in prison for passing classified information to an ally. The median sentence for this crime is two to four years.

Sources have confirmed to Hamodia that since the 21st falls on a Saturday, he is expected to actually be released on Friday, November 20.

“We are grateful and delighted that our client will soon be released,” said his attorneys, Eliot Lauer and Jacques Semmelman.

The news came after years of tireless efforts by  his wife, Mrs. Esther Pollard, who selflessly dedicated her life to seek her husband’s release, his pro bono attorneys, Rabbi Pesach Lerner, and others.

The decision to grant parole was made unanimously by the three members of the Parole Commission. Had parole been denied, Mr. Pollard would have been required to serve an additional 15 years in prison.

The committed individuals who carefully followed every detail in the saga of Jonathan Pollard have been well aware for a long time that the Bureau of Prisons website showed a “projected release” date for Pollard of November 21, 2015.

For years, the notion that Jonathan Pollard would still be in prison when this date arrived was something they preferred not even to think about, given that his sentence was so grossly disproportionate. There was genuine concern whether Pollard, who suffers from numerous serious ailments, could even survive so long in prison. They found it inconceivable that in the United States of America, a case that has been widely decried by knowledgeable U.S. officials as a travesty of justice would go on for so long without being rectified.

Pollard was arrested in 1985 and sentenced in 1987. At that time, a “life” sentence in the United States was defined as 45 years or more; therefore, the 30 years that Pollard has served is two-thirds of the life sentence he received.

According to the relevant law for those sentenced at that time, a prisoner who has served two-thirds of his sentence should be released unless he committed serious infractions in prison, or is likely to commit further crimes upon release.

Pollard has been a model prisoner, and after three decades in prison it was illogical to think that Pollard still has any information to share — or that he would ever do so.

Nevertheless, supporters of Pollard were reluctant to bank on the November 21 release date. They pointed out that he has never been treated in the same manner as anyone else who committed a similar offense in the U.S. No one else who passed classified information to an ally has ever received life in prison — including seven long years in solitary confinement.

Only months earlier, at Pollard’s first hearing, in July 2014 — despite the large number of letters written by high-ranking government officials with firsthand knowledge of the case calling for his immediate release — parole was harshly denied. At that time, the Parole Commission informed his attorneys that nine months before the two-thirds mark of Mr. Pollard’s life sentence, the Parole Commission would perform a “record review” and assess whether, in its discretion, Mr. Pollard should be released on parole on November 21, 2015.

The Parole Commission performed a “record review,” but, to the great disappointment of Pollard, his wife and his attorneys, it declined to consider granting parole without first conducting an adversarial hearing, at which representatives of the U.S. Department of Justice (DOJ) would be present.

When the Parole Commission  informed Pollard in writing that this projected release date is “not automatic” and may be continued to 45 years or more, his supporters saw this as an ominous sign and feared that the miscarriage of justice would continue.

Over the next several months, in advance of the hearing, the attorneys engaged in dialogue with the DOJ and submitted extensive written materials to the Parole Commission and the DOJ in support of parole, demonstrating that Mr. Pollard had an exemplary prison record, and that there was no possibility that he would commit any further crimes if released. They also secured employment and housing for Mr. Pollard in the New York area, and made that information available to the Parole Commission as well as the DOJ.

On June 15, Pollard was informed that the parole hearing would take place at 1:00 p.m. on July 7 at the medium security federal correctional institute in Butner, North Carolina, where he has been imprisoned for years.

All signs indicated that the Department of Justice would once again oppose the parole request, though it wasn’t clear on what grounds they would do so.

Then, in what can be described as a miracle, on July 1, 2015, only six days before the hearing, the DOJ sent a terse letter to Pollard’s attorneys stating that it agreed not to urge denial of parole at the hearing.

Under the circumstances, the hearing went relatively well, but recognizing that publicity could hurt the cause, a decision was made not to release any information about it.

In recent days, a flurry of news reports about an impending release naming unnamed White House officials — most of them containing numerous inaccuracies — surfaced. It was speculated that the administration would seek to get political mileage out of a Pollard release by describing it as an attempt to placate Israel, which is infuriated over the Iran nuclear deal.

In a statement released to his attorneys, Pollard said that he is looking forward to being reunited with his wife, Esther, and expressed gratitude to his long-standing pro bono lawyers, Lauer and Semmelman, and their law firm, Curtis, Mallet-Prevost, Colt & Mosle LLP, who stood by him for so many years, and whose perseverance, creativity, and forceful advocacy were instrumental in securing his release on parole.

“Mr. Pollard is also extremely thankful to the National Council of Young Israel, especially Rabbi Pesach Lerner, who worked tirelessly for many years on Mr. Pollard’s behalf,” the statement continued.

“Others who Mr. Pollard wishes to thank publicly include David Nyer, Kenneth Lasson, and George Leighton, for their work on his behalf in the United States; and Larry Dub, Nitsana Dirshan-Leitner, Effi Lahav, Asher Mivtari, and Adi Ginsburg for their work on his behalf in Israel. Mr. Pollard is mindful that others have helped as well, and he thanks them all. Finally, Mr. Pollard would like to thank the many thousands of well-wishers in the United States, in Israel, and throughout the world, who provided grass-roots support by attending rallies, sending letters, making phone calls to elected officials, and saying prayers for his welfare. He is deeply appreciative of every gesture, large or small.”

“With much joy and gratitude to Hashem,” Agudath Israel of America warmly welcomed the announcement.

“Agudath Israel has advocated over the course of decades for Mr. Pollard’s release, both on legal and humanitarian grounds. His freedom is long overdue. We understand that Mr. Pollard wishes to move to Israel and establish residence there. We respectfully call upon President Obama to take whatever executive actions may be necessary to allow for this to happen. May Yehonasan ben Malka’s health improve, and may he live and thrive for many productive years to come,” the statement concluded.

“We have long sought this decision and we believe this action is long overdue with Pollard serving a longer sentence than anyone charged with a comparable crime,” Greenberg and Hoenlein said. “We are grateful that he will soon have the opportunity to rebuild his life with his wife and address his medical concerns.”

“I want to personally thank Hamodia, which, under the direction of its publisher Mrs. Ruth Lichtenstein has supported our endeavors from the start,” Rabbi Lerner, who has selflessly dedicated himself for more than 25 years to this cause, said on Tuesday.

“Hamodia has been at the forefront of publicizing the Pollard cause and involving Klal Yisrael. Jonathan remembers well when Mrs. Lichtenstein visited him in prison to write his story and to give him chizuk.”

Rabbi Lerner also had a special message for Hamodia readers.

“For years we have been asking the readership of Hamodia to daven for Yehonason ben Malka. Today I ask not only that we continue to daven and ask Hakodesh Baruch Hu for Jonathan’s health and his freedom, but to thank the Ribbono shel Olam for His chassadim.”