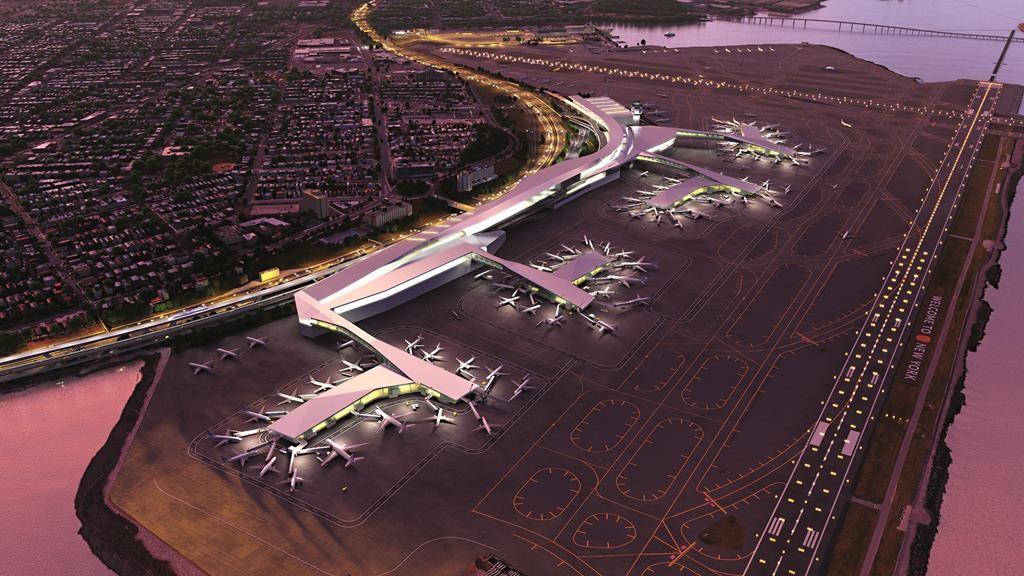 Gov. Andrew Cuomo on Monday introduced a plan to redesign and rebuild LaGuardia Airport, replacing the cramped, outdated hub with a unified terminal that will have more than double the operational space for airliners.

“Welcome to the new LaGuardia Airport,” Cuomo said. “This is what New Yorkers deserve and have deserved for a long time. And now we’re going to get it.”

He said the current airport is a collection of cramped terminals with high volume and low ceilings, and is “un-New York.”

“It’s slow, it’s dated, it has a terrible front-door entrance way to New York,” he said.

Vice President Joe Biden said last year that if he blindfolded someone and took him to LaGuardia, he’d think he was in “some Third World country.” Biden attended the announcement Monday and lauded the governor for “thinking big.”

“I wish everything I said that was truthful but controversial would turn out this well,” he joked.

Biden’s influence was critical, Cuomo said — approvals that would normally take years were expedited by his office.

The first part of the plan will begin next year and cost $4 billion, half from private funding, Cuomo said. Delta Air Lines is a partner in the new terminal.

The new airport is part of an ambitious plan aimed at four of the state’s airports in the New York area. Stewart Airport north of the city and Republic Airport on Long Island would both get Startup New York designation, offering new and expanding businesses to operate tax free for 10 years. Also, Kennedy Airport would have its architecturally distinct Saarinen building reconfigured into a hotel.

“LaGuardia and JFK are economic anchors for this city and they deserve to be the best in the world,” Biden said.

LaGuardia, in northern Queens, is the closest of the New York area’s three major air hubs to midtown Manhattan — just eight miles — and it handled about 27 million passengers last year.

Often the first building travelers see is the sprawling, boomerang-shaped Central Terminal, which opened just in time to receive visitors to the 1964 World’s Fair. Many passengers say it is like stepping back in time.

They immediately encounter low ceilings and dimly lit, narrow hallways. Check-in kiosks are arrayed haphazardly in rows just inside the entrances, where bright green neon lights blare, “Welcome to LaGuardia Airport.” On the west side of the terminal sits a modest food court featuring a hamburger counter, a pizzeria and a donut shop.

In 2012, Travel and Leisure magazine named LaGuardia the nation’s worst airport, saying it had the “dubious honor of ranking the worst for the check-in and security process, the worst for baggage handling, the worst when it comes to providing Wi-Fi, the worst at staff communication, and the worst design and cleanliness.”