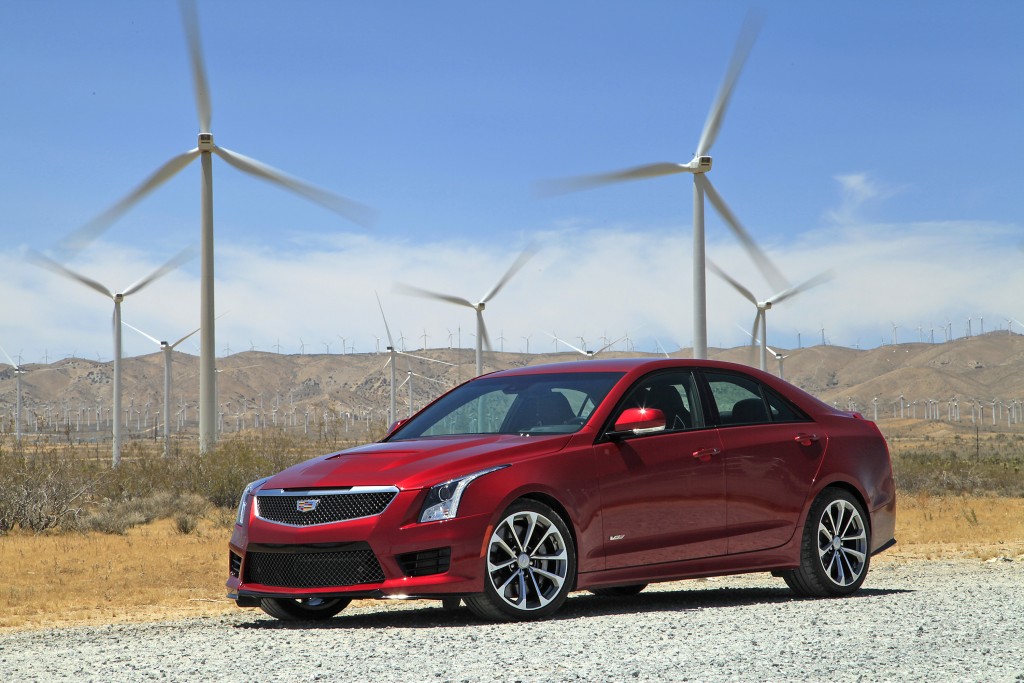 This isn’t your Daddy’s Caddy – it’s a race car with Cadillac crests.

That’s why the brand chose Willow Springs International Raceway in this city outside Los Angeles to show off its new ATS-V, a nimble sport sedan stuffed with a 464-horsepower twin-turbo V-6.

The company says this hot rod, starting at $61,465, targets a younger buyer and bridges the gap between the larger CTS luxury supercar and the entry-level ATS.

The day at Willow Springs’ 2.5-mile track started early, with a light breeze riffling the flags over the pits. A dozen journalists were herded into an air-conditioned tent for a primer on the new vehicle’s stats.

They’re impressive: The ATS-V, with 445 pound-feet of torque, rushes from zero to 60 in 3.8 seconds and tops out at 189 mph. It’s fitted with sophisticated suspension, transmission and braking systems that make it a capable track car.

To prove that point, Cadillac reps put us in helmets, belted us into ATS-Vs and led us on three medium-speed guided laps around the highly technical track.

Then, without further instruction, under what had become a triple-digit desert sun, they turned us loose.

I’ve logged some track time on motorcycles but never in a car.

Despite that, within minutes I was nailing it, as much impressed by the ATS-V as I was by my ability to get the car around the course without running it into a wall.

I found the back end slid in a nicely controlled fashion around the tighter turns and accelerated out of the slides without bucking or dancing. Braking and shifting were seamless and unobtrusive, doing their jobs with no drama.

As a Willow newbie, I clocked only 95 mph on the back stretch and 120 mph on the front straightaway. (I heard bolder drivers boasting they’d hit 135 mph.) At no speed did I experience any unwelcome shudder or vibration, even when I was standing hard on the brake pedal coming off the straightway and into turn 1.

This Caddy underscores its track cred by including – for customers who plunk down an additional $6,195 for the “Track Performance Package” – an options suite that will record lap times, measure top speeds and zero-to-60 mph runs, and even capture video of the car as it roars around the circuit.

It will even record the driver’s in-cabin shrieks of excitement – or terror.

“You can tell your friends you went 150 miles per hour,” a track technician said. “But we’ll know you didn’t.”

The ATS-V looks fast, too. The ATS is angular and forward-leaning, forming a V-shaped wedge, like a sprinter in the blocks. The front aero splitter and hood air extractor help it look at home on the track.

This Cadillac manages to be comfortable, too, in the best traditions of a brand more known for land yachts. The ATS-V, which comes in two-door, four-door, manual and automatic versions, is a roomy cruiser. The Recaro seats are wide but snug. Good sightlines allow for ample visibility. The dashboard, knobs and switches are all within easy reach, and designed with an unbusy simplicity.

The ATS is Cadillac’s smallest offering, competing with sport sedans such as the BMW 3-series or Audi A3. So it doesn’t involve the vast interior acreage of similarly priced luxury cars. But even in the two-door coupes, the seats are ample and allow for easy ingress and egress.

After our hot laps, we took the ATS-V off the Willow Springs property and did a spirited one-hour romp around the surrounding area.

The temperature spiked at 107, and the asphalt waved and waffled as if it had been drinking all day. But the Cadillac, out of race mode, proved a quick, quiet, companionable ride. At 75 mph, the engine ticked along at just 2,200 rpms.

The electronic driving assist features were effective, too – once I found my way through the initially confusing array of dash and steering-wheel buttons.

Back at the track, trying to put a little more heat into those hot laps, I reached my limits as a driver before the ATS-V reached its limits as a car. It was more willing than I to go faster, slide harder and screech louder.

Driving that point home, one of the track experts took out the same car I’d been in and drove it as though he owned it – making me look like a novice, but making the ATS-V look like a pro.