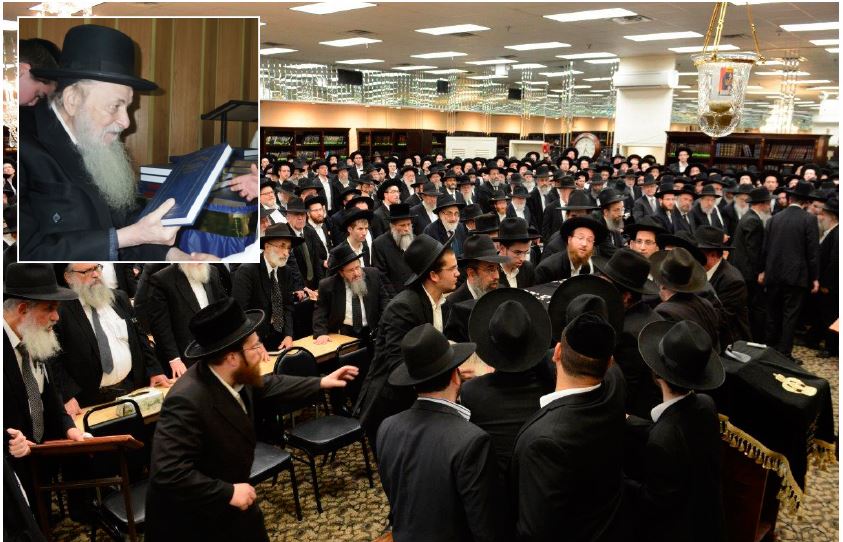 The olam haTorah suffered an irreparable loss Wednesday with the sudden passing of Harav Moshe Feigelstock, zt”l, Rosh Yeshivah of Boro Park’s Yeshivah Tiferes Elimelech and the man who single handedly — though behind the scenes — established the foundations of chinuch habanim on American shores. He was approximately 94.

A person of diminutive figure, with piercing blue eyes and an inscrutable face, Rabbi Feigelstock, as he was known to three generations of talmidim, was a giant in chinuch. What Harav Aharon Kotler and Harav Shraga Feivel Mendlowitz did for bachurim, Rabbi Feigelstock did as the father of the unique American chinuch method.

“If it’s possible to establish a yeshivah in this [spiritual] desert,” Harav Yaakov Kamenetzky, zt”l, told Rabbi Feigelstock before he opened his first yeshivah nearly 70 years ago, “then you should do it. Because you are the only one who can do it [correctly] to completion.”

The anecdote, retold by Rabbi Feigelstock’s son at the levayah Wednesday in the Tiferes Elimelech auditorium, was amplified by the sight of nearly 1,000 talmidim present, from the older ones who studied in the West Side’s Yeshivah Chofetz Chaim in the 1960s, to the newer talmidim of Tiferes Elimelech of the 1970s and on.

To this writer, it is hard to write about such a gadol without the personal, though far from exhaustive, narrative.

As a talmid of Tiferes Elimelech 25 years ago, we revered Rabbi Feigelstock with an awe limited to the greatest Gedolim. He would come to yeshivah several times a year, ostensibly to farher us, but left teaching us  lessons for a lifetime.

“There was nothing,” said Rabbi Avrohom Feigelstock, the Rosh Yeshivah’s son, “that he cared more about than your hatzlachah.”

Rabbi Feigelstock could devote hours of his time just to figure out a technique on how to help a single talmid. Up until the day before his petirah — on Tuesday — he spent hours with Rabbi Hirsh of the mesivta discussing a talmid. He demanded that his rebbeim instill yiras Shamayim in the talmidim, decades before a yeshivah was seen as a vehicle for anything more than rudimentary Gemara and parashah.

But ‘demanded’ is too strong a word. According to Rabbi Rawicki, in his 40 years of working closely together, he never heard Rabbi Feigelstock utter the phrase, “I order you” to do something. He considered the rebbeim his partners, even family.

“He gave us hours of his time so we could understand him clearly,” Rabbi Rawicki said. “But we never heard him use the phrase ‘I am telling you to do this.’ Never. He never [used his] ownership [of the yeshivah to get his way]. He held that a rebbi was a partner, with opinions of his own.”

“He held that melamdim are shluchei duRachmana, messengers of Hashem,” said Harav Moshe Mendel Brus, a son-in-law of Rabbi Feigelstock’s.

But as talmidim, we didn’t know about his caring and the vast amount of time he invested in us. But we certainly felt it.

I recall one 6th grade farher, which began at 9:00 a.m., from Rabbi Feigelstock. He entered the room at the beginning of the day and asked his first question, on maseches Makkos.

“What is the first thing that eidim — witnesses — do when they walk into beis din?” he questioned.

“He says eidus,” one talmid answered. “He swears on a sefer Torah,” another said.

For two hours he parried our answers, knocking down each one until it came time for the 11 o’clock recess.

When the bell rang, he gave the answer he wanted.

On the way out that day, we all made sure to kiss the mezuzah, as I’m sure we’ve been doing ever since.

The fact that I recall this so many years later is testimony to the power of Rabbi Feigelstock’s chinuch methods. His biggest goal was not to get us to learn another mishnah, another blatt, but to make us another link in the chain of mesorah.

“He was the chomah — the wall — of the yeshivah,” said Harav Hillel David, whose wife is a longtime staff member at Tiferes Elimelech.

“The niftar was always asking, ‘what does the Eibishter want?’” Rav David said. “There was nothing that he wasn’t involved in. Which parashah to learn, how much to focus on understanding [the passuk].”

Born in 1921 in Vienna, Rabbi Feigelstock’s mother was a granddaughter of the Chasam Sofer’s daughter Rebbetzin Rechel Friedman. His father, Harav Avraham Feigelstock, zt”l, helped set up a yeshivah in Vienna so that his three sons could have a more advanced Torah education.

The three illustrious siblings escaped Austria in 1939 just after the Aunschluss with Germany. They arrived in England through a Kindertransport, shortly afterward heading to Montreal where they studied in Yeshivas Tomchei Temimim.

Rabbi Feigelstock later learned in Torah Vodaath before becoming a founding member of the legendary Beis Medrash Elyon settlement in Monsey. He was appointed by Harav Reuven Grozovsky, zt”l, as moreh horaah of the shtetl and was the baal makrei during the tekios on Rosh Hashanah.

He later founded Yeshivah Chofetz Chaim in the West Side together with Harav Mendel Zaks, zt”l, the son-in-law of the Chofetz Chaim. Yeshivah Tiferes Elimelech began in Boro Park several years later.

Kevurah was at the Woodbridge beis hachaim. Shivah will be observed at 1435 42nd Street until Tuesday morning.