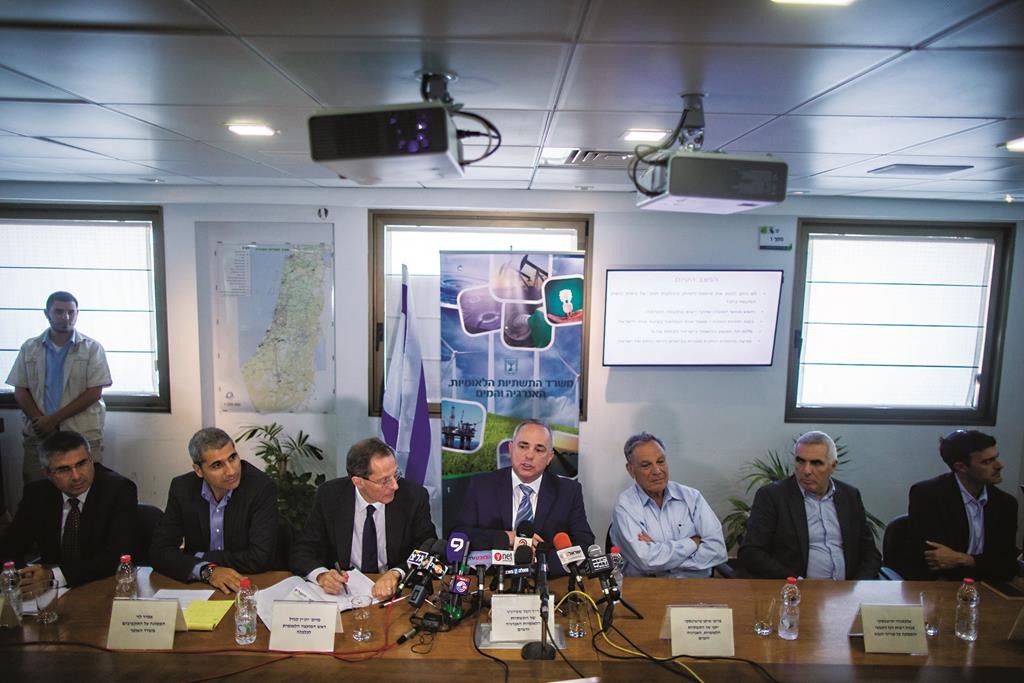 Israel disclosed some of the much-awaited details of the draft agreement with the energy companies for development of the offshore natural gas fields, even as a Knesset vote on the issue was still being delayed on Tuesday while Prime Minister Binyamin Netanyahu struggled to assemble a majority to gain approval.

Disclosure came amid demands from opposition leaders to open up the decision-making process before a vote is taken to give the Cabinet authorization to move forward on it.

In presenting the plan on Tuesday, National Infrastructure, Energy and Water Minister Yuval Steinitz insisted that it was not a compromise in favor of Delek Group and Noble Energy.

“The outline that we reached is not just good, it is the best,” Steinitz declared at a press conference in his Yerushalayim office. “It is the best possible in reality.”

Steinitz explained that the government’s foremost objective is the swift development of the huge Leviathan field, and they will be required to do so by July 2019. It also seeks to promote competition, with the entrance of a new operator into Israel, the reduction of cross-ownership and encouragement of new investments.

The outline calls for prices that “will be reasonable in comparison to the rest of the world,” he said. If, for example, a company exports gas at a price lower than in Israel, then they would need to sell their gas in Israel at that same price.

Regarding the vexing issue of monopoly ownership, Steinitz acknowledged that the companies would retain ownership in Leviathan, though they would have to divest of smaller holdings. The government would reserve the right to require separate marketing of gas after 10 years of operation.

Critics say that the Leviathan monopoly should be broken up, or the country will suffer from lack of competition.

Regarding the smaller Tamar reservoir: Delek will sell its holdings in the reservoir (31.25%) to a third player within six years, and Noble Energy will dilute its holding from 36% to 25%.

This  provision was also a point of contention with Antitrust Commissioner David Gilo. He argued that because Noble will still have cross holdings in the largest reservoirs, Tamar and Leviathan, and Delek’s exit from Tamar will not bring about true competition — instead of a gas company buying Delek’s holding, it will be bought by a financial investor, giving Delek Group controlling shareholder Yitzhak Tshuva “a lucrative exit,”according to Globes.

Even on the selling point that the plan calls for expediting the development of the reservoirs, critics may not be satisfied. In actuality, the state will allow Noble Energy to postpone the development of Leviathan from March 2018 to August 2019. If so, it leaves Israel with one reservoir, Tamar, for its supply of gas during the interim period.

However, the rationale for giving the companies more time is that the regulatory wrangle  that arose in Israel in the past few months created uncertainty that delayed development of the reservoir.

And, they say, if the government cannot pass the deal as agreed, it will delay development indefinitely.