Trade Loss an Ominous Sign for Obama in Month of Challenges 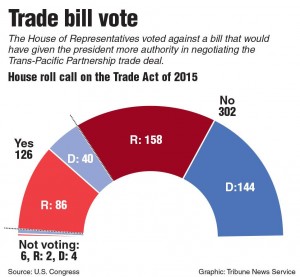 The trade defeat in Congress was an ominous sign in a month of challenges that could help determine President Barack Obama’s standing for the rest of his second term.

Obama also is awaiting a Supreme Court decision that could upend his health-care law, and he faces a June 30 deadline to conclude an accord that aims to curb Iran’s nuclear ambitions.

Friday’s setback was the result of a complicated legislative strategy that linked passage of trade negotiating powers for the president with a measure that would provide training and assistance to American workers who lost jobs because of trade.

A narrow House majority voted to give the president the right to negotiate deals that Congress can approve or reject, but not change. Then a large majority of Democrats, eager to kill that negotiating power, joined a majority of Republicans to vote against the aid for workers.

The White House drew attention to the close passage of the trade negotiation piece and noted that the legislation had overcome similar difficulties in the Senate.

“I’m tempted to walk out here and say that it’s deja vu all over again,” presidential spokesman Josh Earnest said.

But Obama’s struggles raised fresh questions about his ability to hold sway over members of his own party.

Obama made a rare trip to the Capitol to meet with House Democrats on Friday morning. Asked as he emerged if he had changed any minds, Obama replied, “It’s just a question if I changed votes.”

Clinton had until now declined to take a stand on the Trans-Pacific Partnership, but her comments amounted to an implicit rebuke of Obama and a nod toward liberal critics of the deal.

At a campaign stop in Iowa, Clinton said Obama should work with opponents like House Democratic Leader Nancy Pelosi, who engineered the defeat of a related trade package last week.

This article appeared in print on page 1 of the June 15th, 2015 edition of Hamodia.