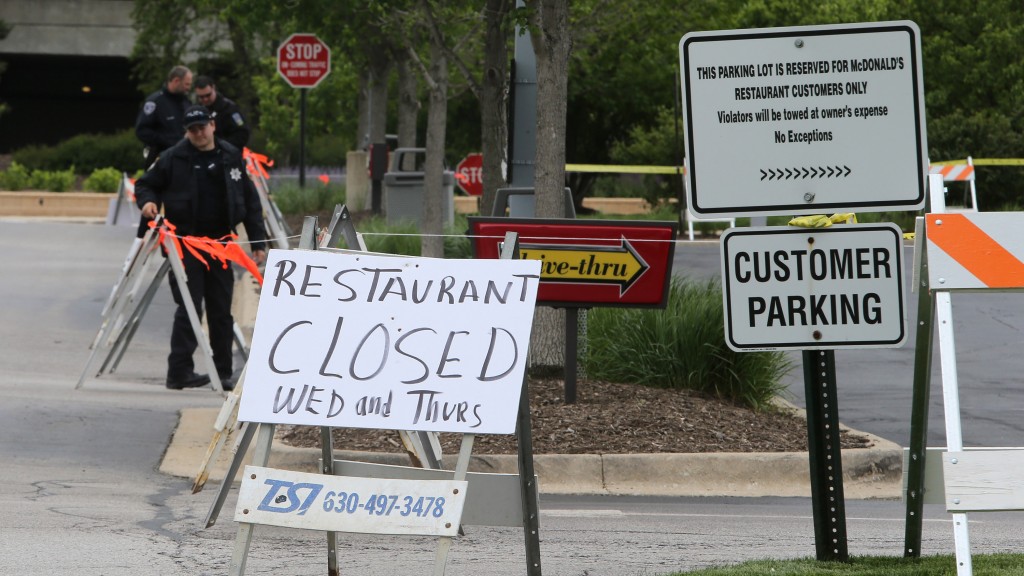 Protesters hailing from as far away as Kansas City, Mo., and New York participated in a demonstration at McDonald’s headquarters in suburban Chicago Wednesday urging that hourly wages for the burger giant’s front-line workers be increased to $15 an hour.

Darrell Miller, 35, who said he left Kansas City Tuesday night on a bus filled with other protesters, said he decided to join in because it was his dream to march like the Rev. Martin Luther King Jr. and fight for freedom. His job at McDonald’s, he said, gives him no control over his life or his independence because the $7.75 an hour he is paid barely covers his bills.

Protesters, who had gathered about a half-mile west of the headquarters, slowly marched toward McDonald’s headquarters shortly after noon. At the head of the long line of protesters, several held aloft a banner: “McDonald’s $15 and union rights, not food stamps. #fightfor15.”

Adriana Alvarez said that since joining the Fight for $15 campaign last year, her hourly wages at a McDonald’s jumped by $1.75 an hour, to $10.50. But the single mother of a 3-year-old boy said her costs also continue to go up and Illinois state budget cuts affected a child-care subsidy she receives. Mary Kay Henry, president of the Service Employees International Union, agreed wages are rising across the country and called on McDonald’s to sit with the union at a national bargaining table and put some of its profits into the pockets of workers.

“Even when we get $15 and a union, we will keep fighting,” Henry said.

The Rev. William Barber II, pastor of the Greenleaf Christian Church in Goldsboro, N.C., said the campaign extends beyond pushing for a living wage. This is a racial fight, too, he said, explaining that people of color are disproportionally working in low-wage jobs. He said that’s why the NAACP is supporting the Fight for $15.

Some of the profits made at McDonald’s restaurants, Barber said, should go back to workers who are relying on public assistance. “We have a right to raise up and fight for $15.”

Wednesday’s protest, which was expected to be the largest organized by the SEIU’s Fight for $15 campaign, came a day before the company’s annual shareholder meeting. A smaller protest is expected Thursday morning. Police planned to close several roads on both days for safety. The company asked some corporate employees to stay home during the protests.

McDonald’s has been under consistent pressure to turn around its performance. Thursday’s meeting is the first under CEO Steve Easterbrook, who took the helm March 1. Easterbrook’s goal is to turn McDonald’s into a “modern, progressive burger company.”

In addition to changing its CEO, the company in recent months has added new menu items such as an artisan grilled chicken sandwich, revised its marketing and advertising campaigns and announced raises for workers at company-owned U.S. restaurants.

The raises also include education benefits across all U.S. restaurants but have been met with reticence from activists who argue the moves don’t go far enough. Fight for $15 is demanding raises across the chain, not just at the roughly 10 percent of U.S. locations run by the company.

McDonald’s also finds itself battling various complaints of labor-law violations filed in state and federal courts and with federal agencies. SEIU alleges that McDonald’s shares responsibility for employees with franchisees as a joint-employer.

Though McDonald’s is the campaign’s main target, Fight for $15 has evolved into a movement on behalf of low-wage workers ranging from airport workers to adjunct professors. Workers from those industries as well as sympathetic advocacy groups and clergy are also expected to join this week’s protests.

Activist groups such as Corporate Accountability International plan to join Fight for $15 protesters, saying McDonald’s has lost the public’s trust with marketing efforts such as teachers’ nights as well as its affiliation with the National Restaurant Association, which they say tries to keep a lid on minimum-wage increases.

Protesters’ demands also include a seat at the table for development of the company’s turnaround plan and for McDonald’s to use resources to raise wages instead of repurchasing stock.