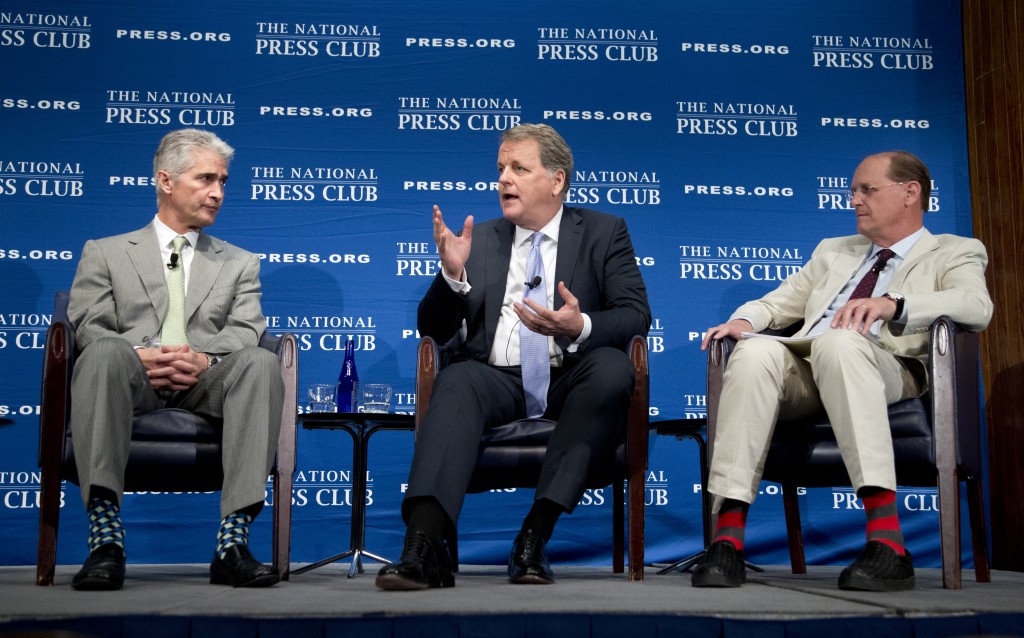 Leaders of the three largest U.S. airlines are stepping up their attack on Middle Eastern competitors that they say get unfair government subsidies.

The CEOs of American Airlines Group Inc., Delta Air Lines Inc. and United Continental Holdings Inc. made a rare public appearance together Friday at the National Press Club in Washington to detail their claims.

– American’s Doug Parker said Emirates, Etihad Airways and Qatar Airways have expanded service to the U.S. by 25 percent since the dispute broke out in January. He accused them of rushing to expand before the U.S. government blocks new flights.

– United’s Jeff Smisek said U.S. airlines can compete against foreign rivals but not against the governments and energy riches of Qatar and the United Arab Emirates.

The U.S. airlines charge that the three big and fast-growing Middle Eastern carriers have stayed afloat by receiving more than $42 billion in subsidies from their governments since 2004.

They want the Obama administration to renegotiate treaties that allow airlines from Qatar and the United Arab Emirates to fly to the U.S. And they want to block those airlines from adding new flights to the U.S.

Emirates, Etihad and Qatar Airways deny they are subsidized, and they accuse the U.S. airlines of hypocrisy. On Thursday, Etihad put out a study claiming that American, Delta and United have received $70 billion in government help since 2000.

“We will prove clearly there is no harm from our market position,” Katie Connell, a spokeswoman for Etihad, said Friday. She said that her airline expands markets instead of simply poaching customers who used to fly on another airline.

The fight has gotten nasty. A few weeks ago, the Delta CEO invoked memories of 9/11 against the Middle Eastern carriers; Qatar Airways CEO Akbar al-Baker fired back that Delta flies inferior older planes.

It is unclear when the Obama administration might decide whether to reopen negotiations over the air-travel treaties with Qatar and the United Arab Emirates or freeze their flights to the U.S. The U.S. airlines say administration officials are looking at their arguments seriously.

For many air travelers, the dispute may be difficult to grasp. It pits U.S. airlines that are making record profits against Gulf carriers rich enough to place huge orders for new jets.

The battle lines are a bit blurry, too. Some U.S. consumer groups are siding with the Gulf airlines, arguing that competition will push fares down. So is JetBlue Airways, which has partnerships with Emirates, Etihad and Qatar.

Those three rarely compete directly on routes with American Airlines, United Airlines and Delta Air Lines, but they compete heavily with the U.S. carriers’ European partners including Air France and Lufthansa. U.S. airlines share revenue from some flights with those partners, and they argue that subsidized airlines will eventually do great harm to them.

Those who oppose American, Delta and United in this fight, Parker said, “either don’t understand that or don’t care about U.S. commercial aviation.”