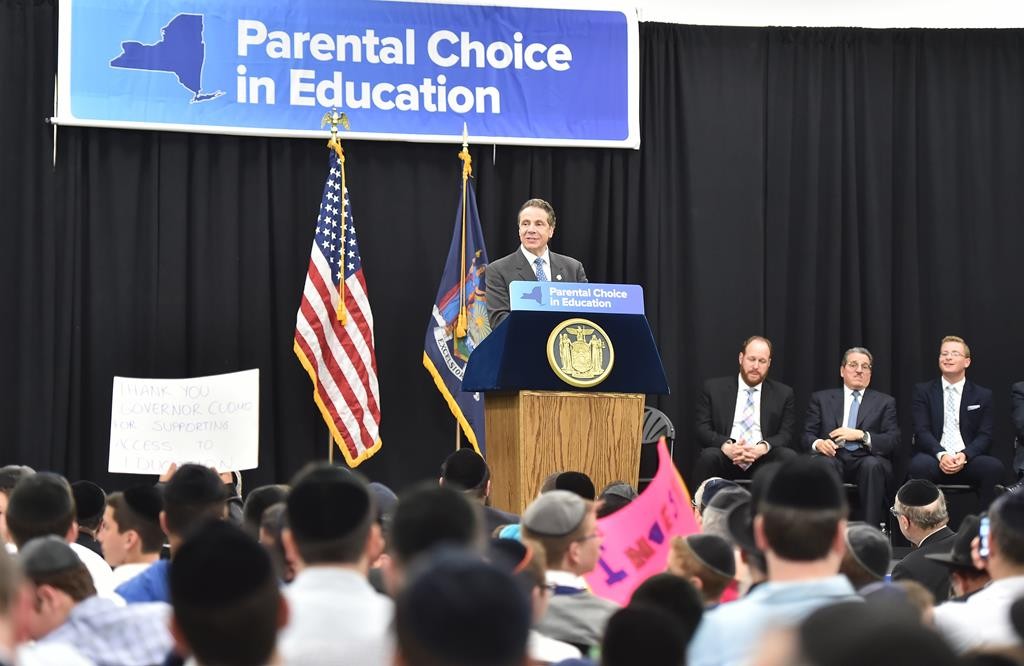 Punctuated by boisterous cheering and waving placards, Gov. Andrew Cuomo on Sunday repeated his assertion at a Flatbush yeshivah that helping parents with the tuition burden is a matter of “justice,” even urging Jewish students and yeshivah heads to tell their legislator they should pass a bill he proposed or risk getting fired.

Coming to the Orthodox stronghold in Brooklyn for only the second time since taking office a half-decade ago, the Democratic governor launched a concerted campaign to get his bill passed by the end of the legislative session on June 17.

“[The] largest investment in public schools in history has been this year, over $20 billion,” said Cuomo, who enumerated some of the new initiatives rolled out in this year’s budget for the public school system. “So no one can say that we have not been robust in our support for public education. We have been.”

Cuomo is urging people to sign a petition to Albany lawmakers at InvestInEd.org. That automatically will send an email to the user’s assemblyman and senator, appealing for them to pass the bill.

The governor was introduced by Eddie Harari, a 17-year-old student at Shaare Torah, who added his own request: “To the legislators in Albany,” Harari pleaded, “please pass a bill — this year.”

But it was obvious that he was preaching to the converted.

“This is one of the most exciting ideas ever suggested,” Mr. Shlomo Werdiger, chairman of the Board of Trustees of Agudath Israel of America, said effusively as he introduced the event.

Mr. Chaskel Bennett, a member of Agudath Israel’s board of trustees, said in an emailed statement that he senses that things are different this year.

“As we saw here today, Governor Cuomo has made justice in education, for all students, a very high priority,” said Bennett. “This is a battle Agudath Israel of America and Jewish activists have been waging for decades, going back to Rabbi Moshe Sherer. It will take real work to pass this legislation, but this time things seem different. We have the strength and leadership of New York’s governor leading the charge, and that changes everything.”

“We have been dreaming of this education tax credit our entire lives,” Councilman David Greenfield said. “And today the governor is making this a reality.”

The bill, if passed, would be a historic moment for tuition payers, who have long been mostly excluded from the huge sums spent on education in New York.

It would give a $500 tax credit a year directly to parents for each child for whom they pay tuition. It also has a 75 percent education tax deduction for donors to a scholarship fund, with a $100,000 maximum. The $150 million bill is divided into $70 million for the tax credit, $50 million for the deduction, and the rest for public school initiatives.

Passage in both the Senate and Assembly is not assured. The Republican-led Senate already passed a more robust education tax credit bill in January, and Sen. John Flanagan, the majority leader, told Hamodia last week that he is still committed to have that become law, not Cuomo’s legislation.

Its passage in the Democratic-controlled Assembly is even more unsure.

The tax deduction is derided by Democrats as a “tax break for the rich.” The powerful teachers’ union is opposed, since it goes to non-public education. And a cabal of lawmakers such as  Assemblymembers Ellen Jaffe of Rockland County and Deborah Glick of Lower Manhattan, both of whom have a significant Orthodox constituency, are leading the fight against any tuition aid.

“Why would anyone who cares so deeply about the poor people of this state begrudge [parochial students]?” questioned Hikind.

Cuomo joked about his Italian ancestry and his family’s decades-long relationship with the Orthodox community, a connection that began under his father, former Gov. Mario Cuomo.

Education, the governor noted, “is your child’s life; it’s your family’s decision. But for your family to have a decision it has to be a real decision. And that’s why I was talking to Sol [Werdiger] about the Italian concept of mishpachah. But there’s another Italian concept I wanted to talk to you about — it’s called tzedakah. … It’s been used to mean charity but the deeper definition is what Assemblyman Hikind said — it’s about justice.”

“It means that if it’s a real choice, you have to be able to afford it. And if you’re paying public taxes [to fund the public school system] with one hand and then you have to pay private tuition with the other, it’s no longer affordable. … So if you can’t afford the choice, you don’t really have the choice. And that’s not justice.”

Cuomo had disappointed many in the community when he used the same term — justice — in a pre-election visit to Boro Park in 2013. That has led people to believe that he will push the education tax credit through Albany in this year’s budget. That failed to happen.

In response to a question by this reporter, Cuomo said that he understood the community’s skepticism.

“This year I’m doing it much different than I did it last year. I put it in the budget, I made it a priority, I’m working very hard to get it passed and I’m more confident this year. But maybe I’m mistaken. This is an uphill fight. It’s not an easy bill to pass.”